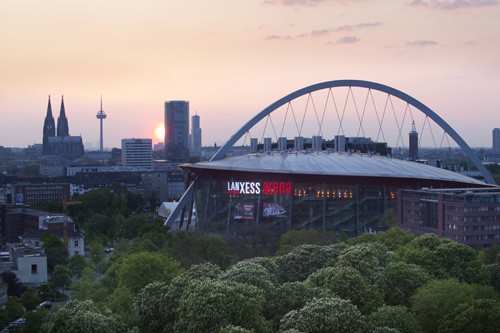 New date for the K2 Cologne Skate Marathon on September 14, 2014

Our marathon expo, the Köln Marathon Expo, will move to popular LANXESS arena after 10 years in the Staatenhaus of Koelnmesse. As of 2014 the expo on running and skating sports will thus have a new location in the arena locally known as the "Henkelmännchen". Due to the rebuiding of the Staatenhaus in the years to come the search for a new location was inevitable.

There are no limits for the mulitfunctionality of LANXESS arena: It is Germany's biggest and most frequented multifunctional arena. Not only do events with international mega stars like ACDC, Metallica, Tina Turner, Madonna, P!NK, and Barbra Streisand take place here. The arena is also the scene for sports of the highest category like several world champion box fights or handball and icehockey world championships.  Further, LANXESS arena also hosts international conferences and stakeholders' meetings of the biggest business companies.

For now a one-year contract is signed to see how the new location will be accepted.

Additionally, our K2 Cologne Skate Marathon including the RheinEnergieMarathon Cologne presented by Sparkasse Köln Bonn will be shifted in the calendar by one month and will now take place on September 14, 2014. Thus, we hope for more independence from the holidays in local Northrhine-Westphalia, better weather and also a further vitalisation of the registration numbers.

Additional information on the K2 Cologne Skate Marathon is available at: http://www.koeln-marathon.de/en/participant-information/inline-skating/skate-marathon/skate-news.html