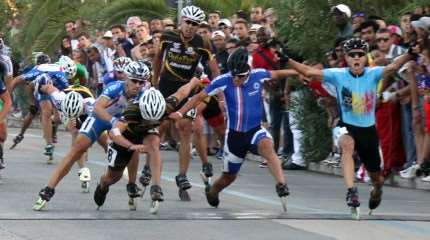 Back on the races per category at the 2012 World Championships

Even if there were some attempted breaks during the different races, none of them really succeeded. Several massive sprints were launched in various categories.

The circuit: a dangerous route

Lots of athletes confessed that the route was dangerous. It was on the seafront with hairpin bends. The bend at one kilometer of the finish line especially, had a very damaged ground with gravel and lots of holes. There were lots of falls by the way. On the rest of the route, you had to be careful with the manhole covers. In fact, on a good part of the route, only one side of the road was passable with two skaters abreast. It seemed that some portions had been re-asphalted after the bad weather of the previous day. 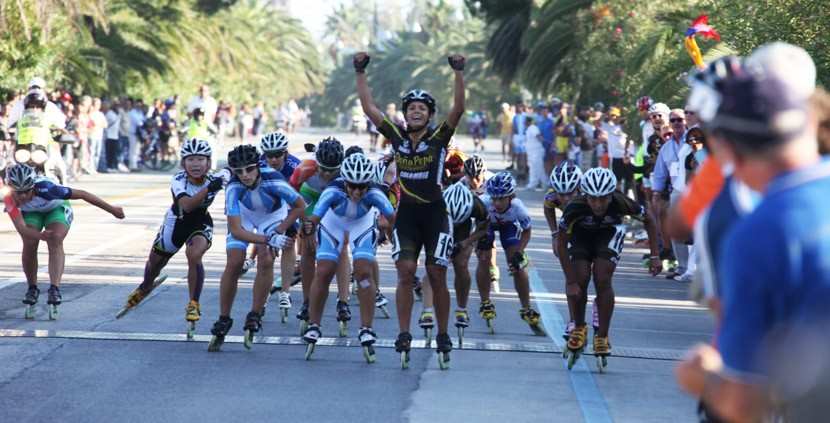 Senior Women's Marathon: Baena on the edge for a South-American podium

Contrary to what was related on other internet websites, the race was not slow. It was jerky. Numerous attacks livened up the women's pack. They raced quite well with a time at around 2 minutes from the world record on that distance. In fact, the Europeans did the biggest work. First of all, the Dutch skaters tried several times to break and dynamite the race. the Germans tried to break too, just like French Nathalie Barbotin. Only the Italians did not skate much, Francesca Lollobrigida being disqualified halfway through the race.

Unfortunately for the Europeans, all the Columbian skaters seem to have had the order to finish with a sprint, in order for Cecilia Baena to win her first medal of the Championships. Kelly Martinez and her team-mates took care of always bringing back the pack on the breaks.

During the sprint, they took and protected Cecilia Baena. One of her team-mates, Elizabeth Arnedo, let her pass during the final sprint. In the public, some spectators would have heard Cecilia shout to her to leave her the victory.

So that the podium is made of Cecilia Baena (Columbia), Elizabeth Arnedo (Columbia) and Maira Arias (Argentina).

Note: the first 6 are South-Americans! 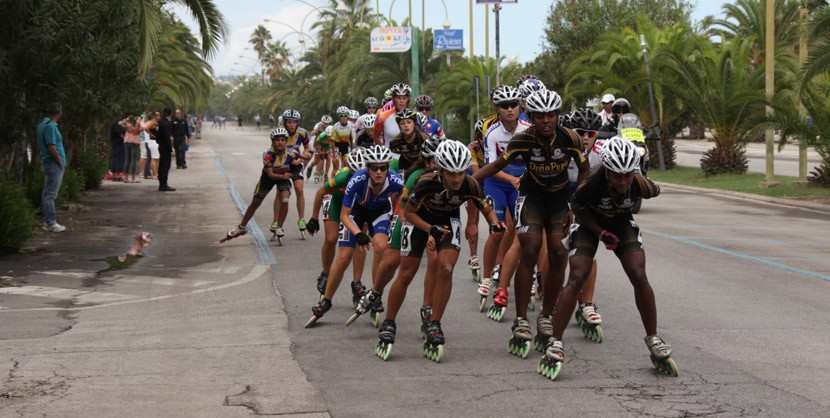 A few attacks but the packs had everything under control. In the French Team, Deborah Marchand is a whisker away from the podium. German Katharina Rumpus wins at the sprint in 1h16min40s232 in front of Ga Ram Yu (KOR) and Yi-Hsuan Liu (TPE).

The French were very active here too, striking hard as soon as the beginning with Pierre-Yves Péridy and Tomy Lépine, who manage to break away together in making a great hole. Although they attacked very early, one of these breaks may have worked if the route had been more winding. But on the seafront of San Benedetto, the pack had the breaks in line of sight and could catch up whenever they wanted.

At the sprint, Chao Tsu Cheng (TPE) pulls ahead by a few meters and wins in 1h05m35s498 in front of Mike Paez (MEX) and Juan Camilo Perez (COL). South America is outdone! Four out of the first five are Sourth-Americans. 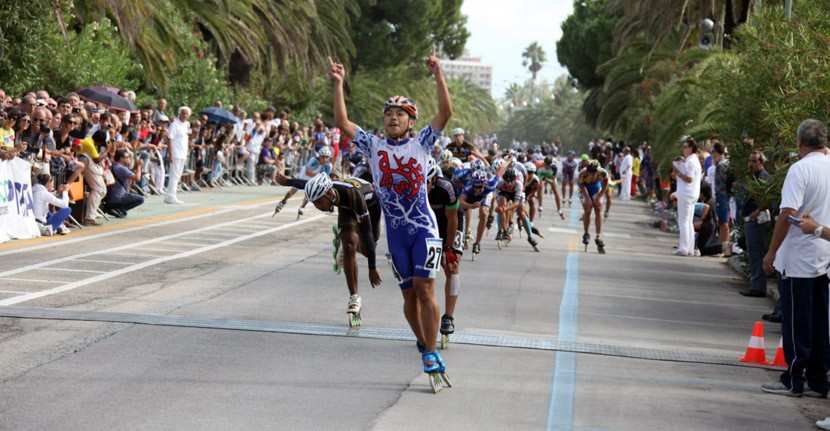 The hairpin bend of the route required important restarts from which the skaters' bodies suffered a lot. In the end, Belgian Bart Swings manages to establish himself at the first place with a final speeding up in the last meters. He ends up in front of formidable Columbian Andrès Munoz (2nd) and French Ewen Fernandez. Another favorite, Fabio Francolini, remains at the foot of the podium. Peter Michael (NZL) ends up 10th after having skated in the slipstream of Munoz.

The Senior Men's Marathon as seen through Ewen Fernandez's eyes:

"For the marathon, we skated back and forth on the seaside with two hairpin bends to turn back… the road was not good and had lots of holes. The biggest holes had been covered with asphalt in the morning. So that the asphalt would come off during the race. We had 15 laps to complete. The tactics of the French Team was: two duos, the first one made of Alexis Contin and Brian Lépine and the other one of Nolan and me… The sprinters stayed in the pack in order to let us back in if needed.

With Nolan, we attacked on several occasions. When the pack would come back, it was the two others' turn to go and so on…

At the very beginning, I found myself break away with Bart and you are going to be surprised… we could not get along and the attempt failed. I tried other breaks but Bart Swings was always there to watch me! Alexis did a very good job! He hurt the pack a lot with his unceasing attacks.

Shortly after halfway through the race, I got in the slipstream of Bart to think about the sprint. Alexis told me "Stay in the slipstream for the sprint, I take care of the rest…" I trusted him and I mentally prepared for the sprint as I am not used to do that. Alexis kept on skating with the help of Nolan to control everything and launch attacks. The sprinters and Brian were around me in case of problem or if there was any effort needed.

The sprint is launched from very far. I am not in the vanguard because of a fall in the last bend. I am hot on the heels of Bart… we catch up the lead very quickly. Bart wins. I am very close to finishing 2nd. He was really very fast. I could not pass him."

The complete information on the 2012 World Speed Skating Championships

Last day on the road of San Benedetto: 5000m relays

Last day on the road of San Benedetto: 500m