2015 Annual Congress of the FIRS 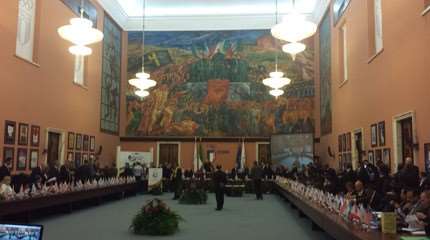 The congress was not elective but about 60 representatives of different national federations had made the trip. The headquarters of the INOC are majestic with high ceilings and huge mural frescoes. The room is packed and seats are lacking for latecomers. The quorum and the number of votes reached, the meeting starts at 10am sharp.

Sabatini Aracu, the president of the FIRS, opens the session. He will keep the floor most of the day...

The 2017 World Roller Games are the main topic of the congress. In the morning, the two candidates for the organization of the Roller Games, Lima (Peru) and Barcelona (Spain) shell out for long presentations of their respective projects in front of the assembly.

As a reminder, the Roller Games have the will to host the world championships of all the disciplines of skating simultaneously. It means more than 100 countries and over 6.000 competitors. The event needs exceptional infrastructures and the organization competences of a city that has already hosted the Olympics. It is the case of both candidates. Nankin City, China, had also applied for it but after the deadline, so that its candidacy was not taken into account.

Once the candidacy files submitted, a delegation of the FIRS visited the infrastructures in Barcelona. The visit planned for Lima was cancelled a few days before, for political reasons. It is a shame that both cities did not benefit from the same visiting conditions but it was beyond the control of the FIRS.

Barcelona started, with a team made of a dozen representatives including the president of the national federation, the elected representative for Sport in Barcelona, and marketing contributors. Lima took the floor in turn, in smaller numbers, but with certain enthusiasm and determination from its president.

At the end of the presentations, that took almost one hour each, the executive board of the FIRS withdrew to deliberate on the awarding of the 2017 Roller Games. The president of the FIRS, Sabatino Aracu, made a speech and after opening an envelope, modeled on the olympic attributions, declared the City of Barcelona the host of the 2017 Roller Games.

The FIRS has the will to dynamize its image to reach its objective: Making roller sports enter the Olympics.
A reflection is put forward concerning the potential relocation of the headquarters of the FIRS, currently in Rome, to Lausanne, Switzerland. The FIRS could be hosted at the Maison du Sport, the current headquarters of the IOC (International Olympic Committee). The presence of the FIRS in the Swiss city may be beneficial for its objective. The decision will be voted by the executed board of the FIRS.

The main objective of the status updates of the FIRS was to make several changes, such as a thorough review of the internal organization, and more specifically of the executive board.

It goes through the creation of 8 technical committees representing 10 disciplines:

Until now, only the first 4 on the list, the 'historical' disciplines, had the right to vote. Today, the 8 committees will have the same weight in the FIRS as for executive board voting, which is a step in the right direction.

Four new committees were created but some points still remain to be clarified:

It would seem that both disciplines may keep their independence; Besides, the designation of the two disciplines is a question that should be decided in the following months, given that both aspire to the name of 'freestyle'.

New marketing strategy of the FIRS

The Federation called in an external company in order to thoroughly review its image. A slogan appeared and remained on display the whole meeting: 'We are already in the Future'.

'We are already in the Future': The FIRS has the will to show a new image and be in line with the future through several decisions. This slogan comes with a new logo, more dynamic, and with a new graphic charter.

The template of the new FIRS website was also presented with the creation of an intranet for a better communication, both internal and external: A modern website with flash applications, integrated social networks, the FIRS TV, streaming videos, etc.

Awarding of the 2016 World Championships

The 2017 World Roller Games having been awarded, there still remained the awarding of the two 2016 World Championships. The Speed Skating Worlds were awarded to the Chinese city of Nankin, and those of Artistic Skating to Novara, Italy.

Stock taking and next steps

The 2015 FIRS Congress announced a lot of changes heading in the right direction: A new image of the FIRS, a more open executive board and the 2017 Roller Games in Barcelona, which promise to be the best showcase of our sport. The OLS team took part in the visit of the Spanish infrastructures: More exclusive information on the Barcelona organization in the upcoming weeks!

Meanwhile, whatever your skating specialization, you can already reserve the dates of the 2017 Roller Games that will take place from July 9th to 23rd, 2017. 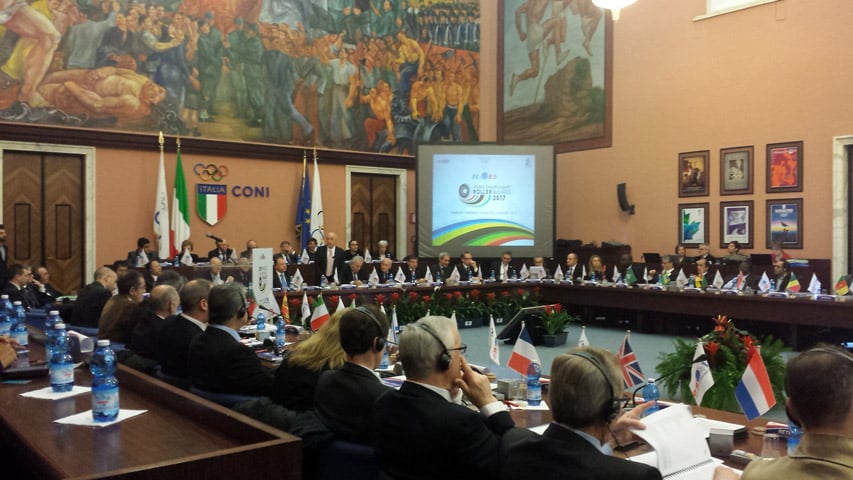