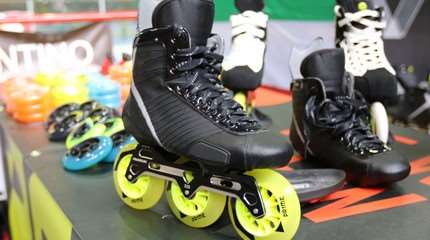 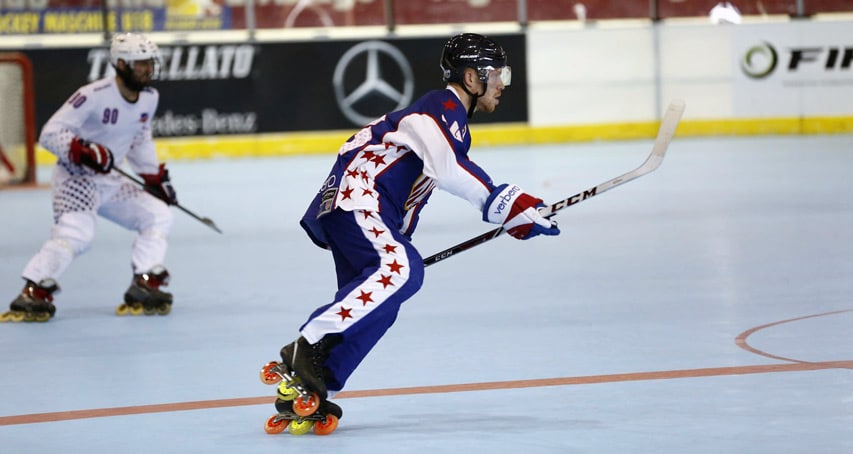 In 2016, Powerslide created a whole range of 3-wheel roller hockey skates, available under the brand Reign. We had the opportunity to see them in action at the feet of the captain of the American team of Roller Hockey (photo above). The German brand started from scratch and relied on its knowledge of other skating practices to offer an innovating product. The brand took into consideration the expertise of players from the US, and from the Czech Republic, to develop its products. 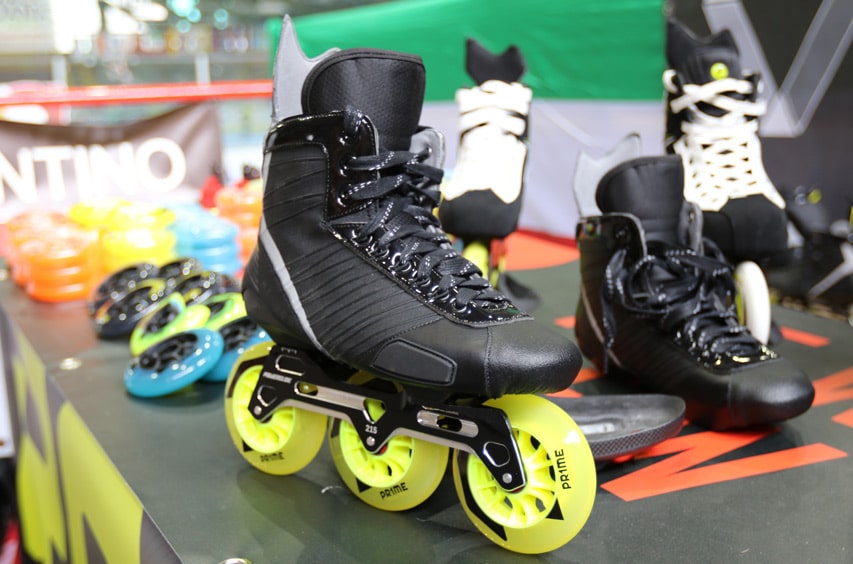 The carbon structure of the Reign skates is quite similar to that of the speed and fitness models by Powerslide: high top, just above the malleolus and open at the rear along the Achilles tendon to avoid friction. The carbon also offers rigidity and lightness. On many current roller hockey models, the carbon structure is limited to the sole. The toe part is covered with synthetic leather, it would be interesting to test its wear on the long run. The protective pad on the side is similar to that of the freeride models of the brand. 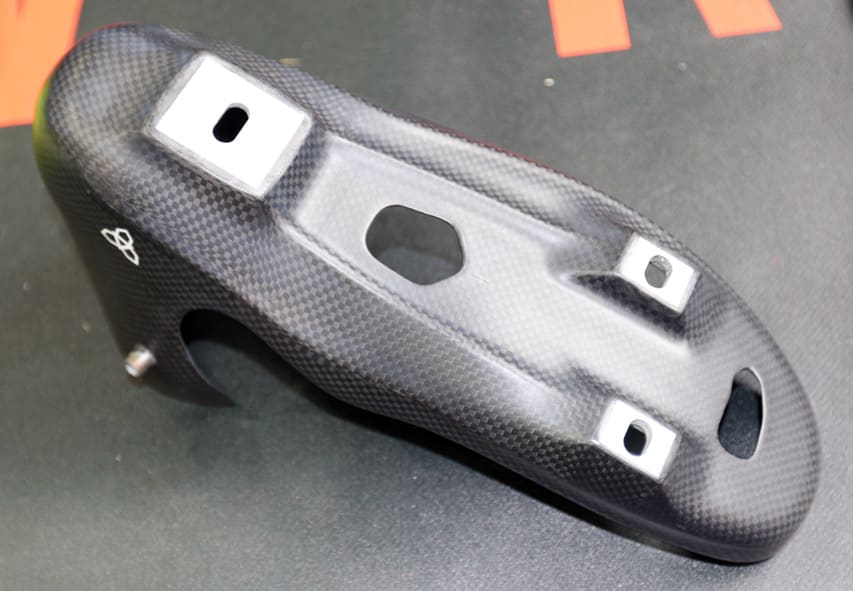 The fixing points of the frame are based on the Trinity concept: the shell and the frame are connected by 3 points on the sides of the frame, not in the center, so that you gain a few millimeters to lower your frame, even to make it slightly enter the shell. A lower skate brings better maneuverability and more stability, both indispensable qualities in roller hockey. Moreover, the spacing between the fixing points provides better force transmission. The design of the frame looks a lot like that of the Alpha frame of the Hardcore Evo slalom skate. It has 3 wheels of 100 mm, whereas most hockey frames have flat 4x80 or hi-lo 2x80/2x76 set-ups. 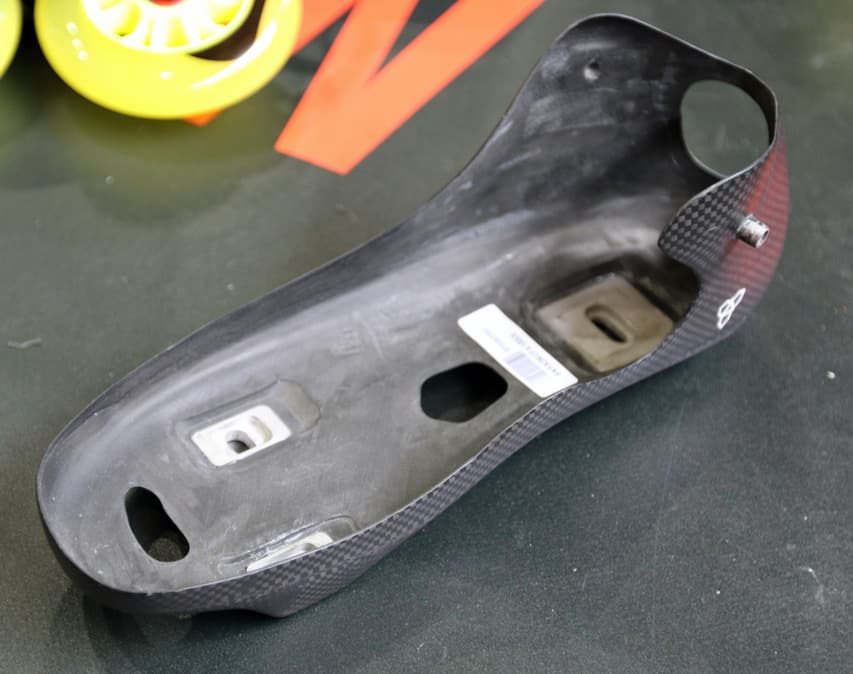 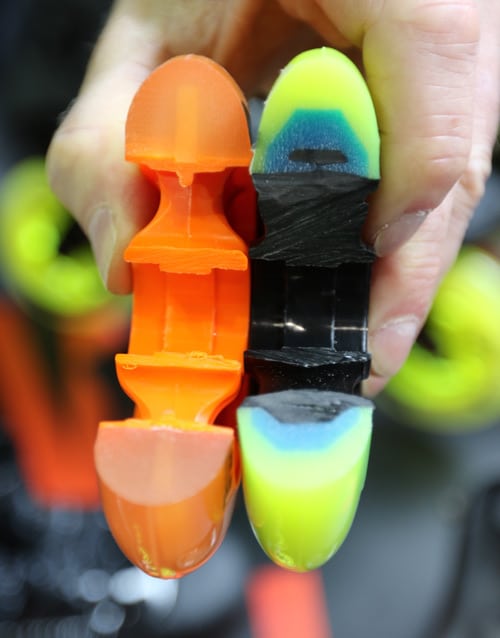 Until recently, most 3-wheel models were destined for kids. For a few years, Powerslide has spread the concept to adult models in speed and fitness, and even in freeskate.

In roller hockey, Powerslide and its new brand, Reign, insist on the better maneuverability directly linked to the 3 wheel set-up, with the central wheel serving as a pivot point. The bigger diameter offers better rolling and more inertia once set in motion.

More than just a question of diameter, Powerslide / Reign also bets on dual density PU to improve the performances of the skates. Here again, it's a concept widely used in speed skating (adapted to inline skating in the 90's by K2, but has been existing on quad wheels for over 30 years).

The dual density concept combines both the rolling quality of a hard PU on the outside, and that of a softer PU for the grip and comfort on the inside.

The experience drawn from other disciplines

It's interesting to analyse the evolution of other disciplines than hockey to evaluate the potential gain brought by these changes.

Speed slalom is the discipline the models of which are the closest to roller hockey, with high-top rigid shells mounted on short frames with big diameter wheels. In speed slalom, a drastic improvement in performance can be noted, with the breaking of world records thanks to new set-ups in 3x100 and 3x110 mm. Special frames have been created by Powerslide, the Pleasure Tool, and Seba, the 310.

Moreover, switching to 3 wheels led to a slight weight gain on each skate, so that you also gain in inertia, allowing better speed conservation.

Consequences on the field?

This type of set-up, 3x100 mm, should be better suited for big 50x25 m fields where the inertia gain should enable the players starting from the back of the field to benefit from a speed differential, especially to counter attack.

The maneuverability is close to that of a 4x80 mm set-up of the same interaxial spacing (around 243 mm).

The only damper would maybe be about the slightly higher height and consequently the lever arm increase when using edges. But this will be the object of an upcoming and more thorough test.

The Reign range is made of 6 models. Greek mythology seems to have inspired Powerslide with many legendary references:
• Triton (god of the sea)
• Anax ('tribal king' in Ancient Greek)
• Kronos (god of time and father of Zeus who ate his children!)
• Helios (the sun)
• Zeus (god of gods)
• Perseus (half-god, son of Zeus)

Find all the models in our skating data base. 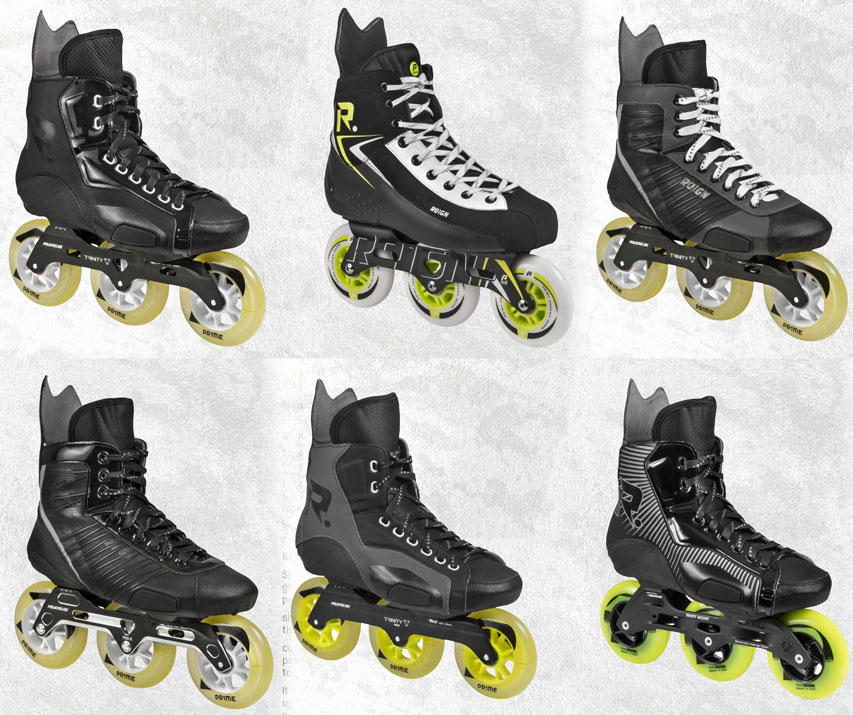