Ultimate day of the 2013 Senior World Championships of Inline Hockey 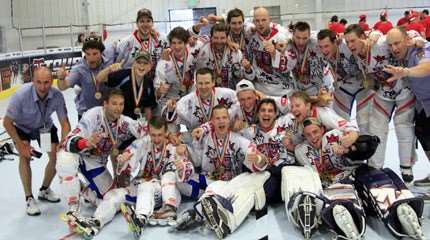 The Czechs on Top of the World In winning a third world title, the Czech Republic imposes itself a bit more on top of the world of inline hockey. The team was a cut above the Canadians during the final. The new world champions did a perfect game. They were efficient during the (too) many Canadian penalties. Final score: 8-2. The Czechs manage the Junior/Senior grand slam.

In the consolation final, Switzerland managed to defeat the Swedish team who had opened its game. That 7-3 loss doesn't question the nice 4th place of the Swedes, that team will be eagerly awaited next year.

The USA finished the worlds on a high note in front of their public. They completely choked the French Team who could contain the American attacks only for 15 minutes before yielding. On the small area of Huntington Beach the game was hectic and both teams exchanged blows, systematically attacking and counter-attacking. The USA finally end 5th. Behind, France gets the same place as last year. The French Team hasn't managed to reach the semi-finals for a few seasons. Italy completes the Top-8 in front of Great Britain. 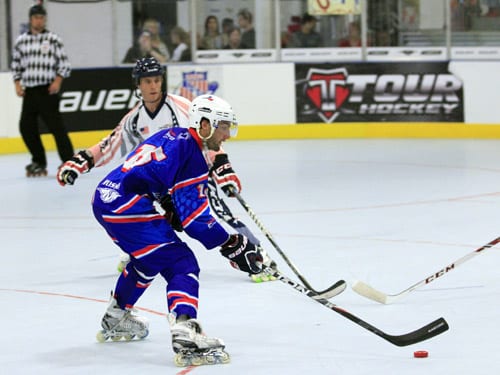 At the World Cup, Argentina was crowned champion after a crazy game against Brazil, lasting until the last minutes of the overtime to free the group and all the supporters. New Zealand imposed itselft 5 to 0 against Mexico and took the bronze.

Women's category: The USA for the grand slam

The suspense was breathtaking until the end of the game. Canada led the scores the whole game until they missed the occasion to make a grand slam. 3 minutes from the end the Canadians took two goals in a row and gave in 2 to 1.

The Americans seized back the title they had let to the Canadians last year. Despite a bad start they managed to reverse the situation with a tie, 3 minutes from the end. Then they took the advantage while they were at it, 2 to 1.

The women also got the title in the junior category. The American women got the upper hand for want of success in the men's.

Behind, New Zealand created a sensation in winning 5 to 2 against Columbia. They get a medal for their first participation!

The World Championships ended with mixed results. The problems of management of a venue without showers, with a too small hockey area, the problems of the unavailability of the Honda Arena for the final, and many other details spoiled a party that could have been spectacular.

However there are a few positive points: The number of registered teams has increased with new nations such as New Zealand and India. Moreover, we could enjoy the comeback of Great Britain and Sweden. The success of the women's junior worlds should also be added to the list.

Next year Toulouse will have a lot to do, but the organization is on the good way and will offer a great party, supported by a big fabric of associations from the South of France.

Since then, the World Games will take place in Cali, Columbia. Inline Hockey will find its place there from July 26th to 30th, just like many other sports. The World Games are a good showcase for skating. They are considered as the final hurdle for the Olympics.

In inline hockey, only the Best 8 nations of the previous year will take part, divided up in the same groups as for the world championships. That event takes place every 4 years. Inline Hockey has been invited for the 3rd time in a row and the USA have always imposed themselves at that competition.