Summary of the 2015 Terras do Infante International Tournament in Lagos, Portugal 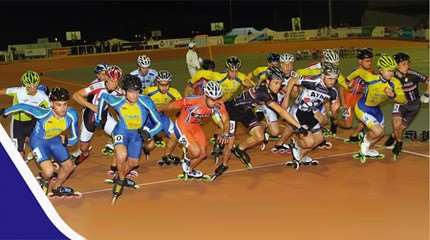 The organization of the 12th Terras do Infante International Tournament benefited from the renovation of its speed skating track. It has now a beautiful Vesmaco coating, meeting the international standards.

Teams for Powerslide, Bont, Luigino and Cadomotus made the trip. Despite the intermittent rain, the races could unfold in good conditions.

The skaters of the local club and the Bont Team put on the show in the senior men's category, especially Martyn Dias and Diogo Mareiros. They won the 500 m race, the 10 km point race, the 10 km point/elimination race and ended up 2nd at the 1.000 km race.
French Joris Garderes (Valence Roller Sports, France) also did good feats in taking the 3rd place, like in 2014. Felix Rijhnen (Powerslide, Germany) finished 4th and Mark Horsten (Luigino, Netherlands) 5th.
Let's also note the participation of Jan Blokhuijsen, crowned ice skating Olympic Champion at the 2014 Sotchi games.

In the senior women's category, German Katharina Rumpus (Powerslide) got the victory. She imposed herself on the 1.000 km and the 10 km point/elimination races before taking the 2nd place at the 500 m race. She got ahead of her compatriot and team mate, Sabine Berg. Clémence Halbout (2 APN Avon 77, France) finished 3rd at the general ranking.
Local Andreia Canha ended up at the foot of the podium. Juliette Pouydebat (Pibrac RS, France) took the 5th place.