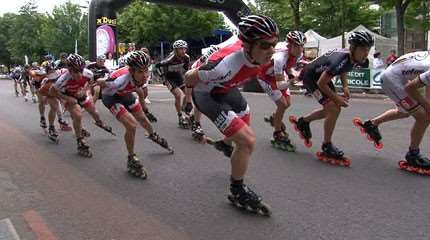 The forecast announced tough conditions for several days... but skaters managed to avoid the raindrops! The bourguignon rendez-vous offered us an amazing show. The we treat for the eyes with a morning was dedicated to the Master European Championships of marathon and the afternoon, the apotheosis: the stage of the World Inline Cup!

In the category of 30-39 ladies, formed a breakaway with a Dutch, three German and one French skater. The German Ulla Hingst can not follow the fast pace. The remaining skaters will attack to outdistance Celine Cognard (Generations Roller, France) but she stays in the pack. A new attack explodes the pack. The race ends in a sprint between two escaped skaters: Karen Teuling (Netherlands) takes the first place, Röhr Silke (Germany) is second. Celine Cognard (Generations Roller) takes the 3rd place.
You can watch the video of this race here.

In the men's race, the French skater Vincent Esnault (Team France) espaces with the  Italian Marco Nuvolara (Polisportiva Casier). The latter has had bad luck with a technical issue with two laps to go. Vincent Esnault therefore get his first European title... well deserved after several years of activity in the elite category! Hats off to this obstinate and tireless skater we have often seen at pride of place. The second place went to Marco Nuvolara (Italy) and the third place to Patrick Taubrecht (Germany).

You can relive the race on video here

The second European medal of the day falls into the hands of another skater equipped with a big heart, I named Erwan Le Corre! Again, under the colors of the French team, Erwan dares go over 4 laps alone (about 10 km before the line).
He take his opportunity during a moment of hesitation, he continues his effort, the gap is growing.
Behind him, the pack does not chase, the skaters have some difficulties to cooperate, the Italians skaters are discussing, the French team is stalling to help Erwan to make the gap. A one and a half turns from the finish, Erwan has 30 seconds ahead. Eric Weinbrenner (France) and Benoit Thiébault (France) will also try to escape... without success. The pack begins to chase but Erwan crosses the line and takes his first victory in a continental competition. Not bad for a skater who started skating at the age of 33!
The English Sutton Atkins (Sk8skool) won the sprint of the pack. The italian Patrizio Giulioni (Skate Club Jesi) is third.

In the women's race, Germany and Austria take the lead. Ute Enger (Germany) get the first place, followed by her fellow countrywoman  Gabriela Schwartz (Germany) and Eva Wagner (Austria). 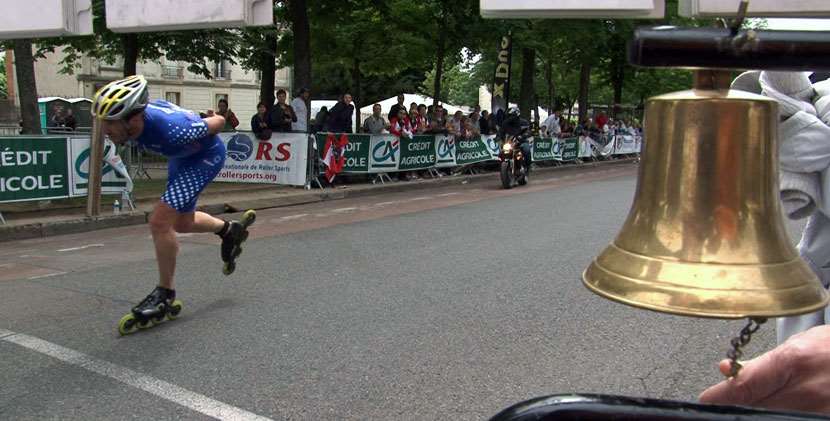 As for the ladies over 50 years, the Italian Desiana Caniatti prevails after a long solo breakaway where she manages to take more than 6 minutes of advances over the other competitors. Claudie Duval (CS Bretigny) takes second place in the final sprint of the pack, the Austrian Marlies Hotstaetter get the third place. You can watch the video of this race here

You can relive the race on video here

The men's race of more than 60 years skaters crowns a well known gentelman, Mr Giuseppe Presti (Italy). For those for whom that name means nothing, perhaps that you already heard of his sons? Luca and Massimiliano, two of the best italian skaters for the past 10 years? Yep, in Presti's family, skating is from father to son!
Dad Presti takes the first place of the race, the German Albrecht Bauer is second and and French Jacques Houssais (ASTA Nantes) is third. Serge Guichard (AM Sport) takes the 4th place.

Second painting: the third stage of the World Inline Cup 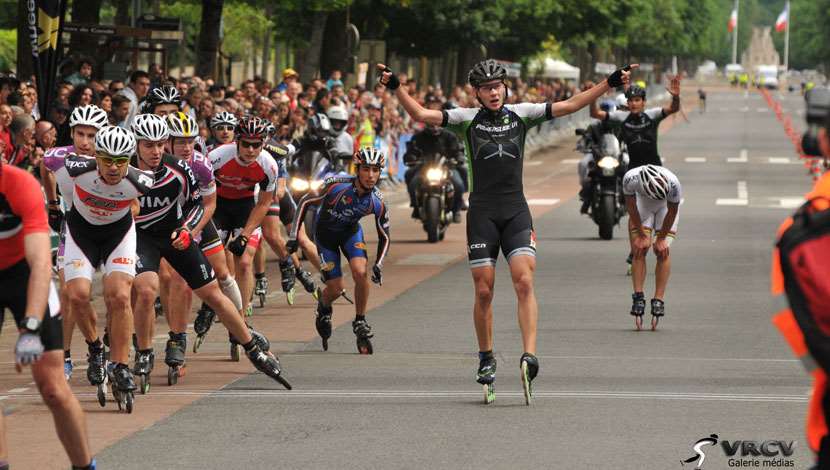 We saw records fall in Dijon, with a men's marathon as fast as a cannonball. The clock announces 59'15 - 2 minutes less than the previous record! Okay, the roundabout of the Wilson Place got a facelift with a brand new coating which make it faster, but the succession of attacks and counter-attacks certainly brought down the clock..

The observation round did not last long. The race starts at high speed. Ewen Fernandez lit the wick at the start of the second round. Yann Guyader (EO Skates) chases immediately with the Swiss Skate Team, the junction is made after 1 km. The peloton is considerably stretched. The tone is set.

A group of four skaters managed to escape from the pack: Julien Levrard (EO Skates), Felix Rijhnen (Powerslide Matter), Alessandro Gherardi (Vitamin & Co) and a Swiss Skate Team member. The latter will finally let the train go.
The major teams, Powerslide and EOSkates, have each a skater in the escape, so they do not chase. So the Swiss Skate Team has no other choice but to lead the pack to catch the escapees ...
And they got fingers burnt! The white and red make an impressive job on the front, putting all their forces into battle: Michael Achermann, Nicolas Iten, Severin Widmer, everyone pushed to counter-attack. And it takes a lot of energy to do it. Nicolas Iten will blow up the pack several times. Nolan Beddiaf (RPM Poli) and Yann Guyader (EO Skates) spend a lof of energy to stay behind him. This high pace is certainly the origin of the impressive average of the race: more than 42 km/h!
The Helvetians did not have enough, they harden the race by attacking one by one. EOSkates chases with Yann Guyader and Julien Levrard. Bart Swings (Powerslide) stay still wisely Yann behind, saving his energy.

The junction is made with 7 rounds (of 19) from the finish. All these efforts to finally see Ewen Fernandez (Powerslide Matter), Bart Swings (Powerslide Matter) and Yann Guyader (EO Skates) attacking. The three skaters fly to the line. The Swiss Skate Team is still tworking to come back but the race is over. Julien Levrard (EO Skates) tries to escape in the last lap to get 4th place but the rest of the pack back on him.

The three leading men have a score to settle after the victory of Yann Guyader in Koblenz (Germany) ahead of Yann Ewen and Bart the previous week. The mano mano to be launched. Ewen start to sprint, Yann in his wheels, Bart arrives at full speed from behind, no one can follow the high pace. Yann takes the second place of podium and Ewen is third. A great race! Ladies should take it as an example.
Seconds later, Felix Rijhnen just take the fourth place by winning the sprint of the peloton in front of Fabio Francolini (EO Skates).

VWatch the official video of the race here (in French) 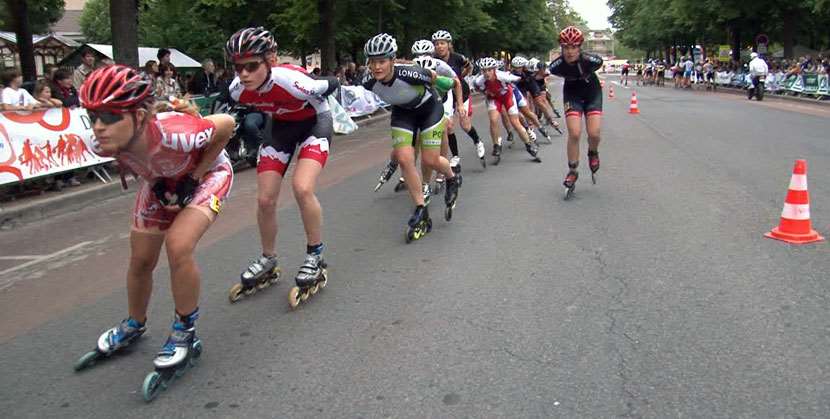 The women's race is boring (as usual?), no skater managed to escape... True to herself, Nathalie Barbotin (Powerslide Matter) gives life to a race that quickly becomes monotonous. She took the reins in the first lap. The relay follows on for the twenty skaters in the leading pack. Several attacks will be tempted without success.
The choice of wheels has been decisive in the women's race, many skaters opted for the rain wheels... but finally the ground remained relatively dry. The rain wheels stick on dry ground, reducing the chances of counter attacks and complicating the sprint.

The French Nathalie Barbotin has expressed her dissatisfaction over the inaction of the race after the finish. She also pointed an unsportsmanlike behaviour which was made shortly before the line. In the final sprint, the German Jana Gegner (EO Skates) won the sprint ahead of her italian teammate Roberta Casu (EO Skates) and before the French Justine Halbout (2APN Avon).

VWatch the official video of the race here (in French) 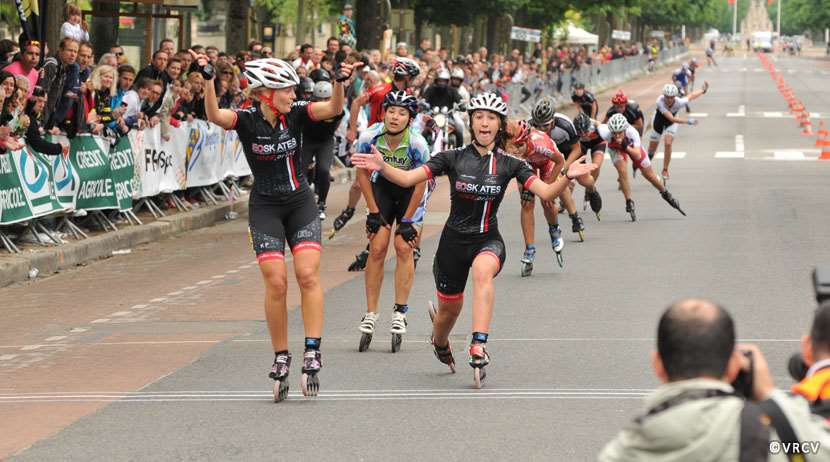 Main results of the Master European championship of marathon