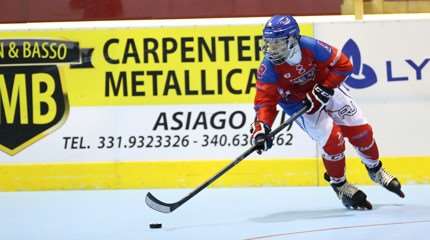 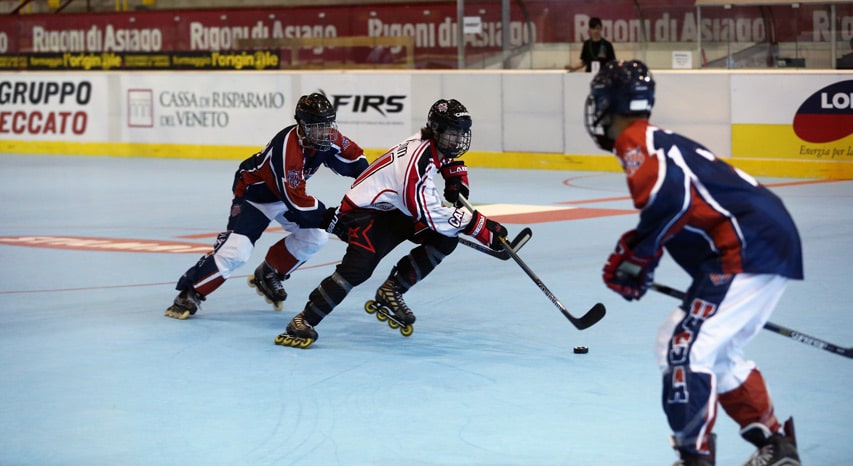 The 24th World Championships of Roller Hockey take place from June 12th to 26th in Italy, more precisely in the neighboring municipalities of Asiago and Roana. Those ski stations have two ice rinks, the size of which has been adapted for roller hockey. While the Italians did a great work of communication both on the spot and ahead of the event, hosting their 3rd Worlds in 8 years, the distance between the two rinks and the increasing number of teams — 68 in total — are harder to handle. Recap of those Worlds in the mountains...

2016 was the year of the comeback of the Canadian women on the higher step of the podium. The North Americans had hoped for it since 2011, a title seized first by the USA, then by the Czech Republic last year. But this year they proved to be untouchable, with a solid Kendra Fisher keeping the goal, the efficient offenses of Lindsay Grigg and a homogeneous team on the whole. But making their way to the top through the other 16 teams of their group wasn't an easy task.

They first had to fight against the Czech Republic in a group game, which finished on a tie score of 1-1. In the other groups, the USA and France qualified for the quater finals, just like Spain, Finland and two surprise-teams, Namibia and Italy. But these two were no match against Canada and the USA, who won their respective games and went through to the next round. The Czech Republic prolonged the suspense against Finland, finding the crack at the very end of the game, while France had a great fright against the young Spanish team, winning by a short head, 2-1.

But in the semi-finals, the USA and Canada decided to break the suspense right away, imposing themselves respectively 4-0 against the Czech Republic and 3-0 against France, to meet in a now-traditional North-American final game.

Just before that last game, France finally got the long-coveted bronze medal they had in sight since 2011, a well-deserved reward for the new head coach, Carlos Perez, who knew how to inspire the team and get a different approach to the worlds. Marina Drici Corbel was one of the key-players of the French team, scoring, almost symbolically, with a wonderful shot at a tight angle during the extra time to get the bronze.

Canada — USA: the opposition of the enemy sisters. It is what the public got to watch during 40 minutes. In a tight but committed game, Canada quickly took the advantage, and controlled the whole game with an iron fist. As the most complete team of the weekend, they highly deserved the title. 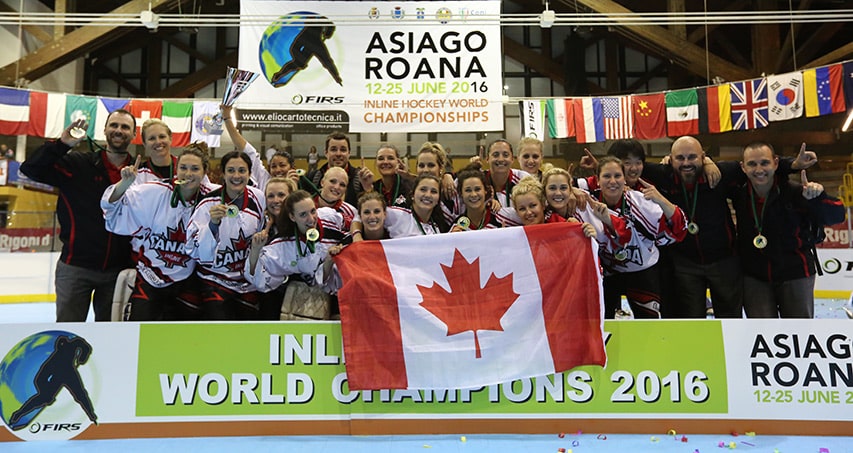 Junior Men: Italy was almost there!

Italy was dreaming of a home feat. They missed their ultimate goal by a whisker, filling the venue with excitement until the last seconds of their game, with an amazing catch-up against the formidable Czech armada.

At the beginning of the week, 18 teams were ready to fight. But at the end of the group games, all very tight, the Czech Republic crushed the USA, technically weaker, in quarter finals while Spain did the same against Canada, wining 5 to 1. As for the Swiss, they let their physical play do the talking to get to the next round and meet Sweden.

The only tight quarter finals game is the one opposing France to Italy, won by the locals during the extra time. The French may have some regrets since they didn't manage to make the most of the numerical superiorities they got at the end of the game.

The Czechs, calm and serene, didn't leave a chance to Switzerland.

As for Italy, they made the most of a non-game of the Spanish to be allowed to take part, for the first time, in the final of the Junior worlds against the Czech Republic, the current world champion.

Even if the current title holders were the favorites of the game, the locals had nothing to be ashamed of and put on a show for their 2000 supporters in the public. Italy caught up on the 2-0 lead of the Czechs after the break, but the Czechs took off, scoring several times in a row, up to a score of 5 to 2. But a double penalty at the end of the game offers the opportunity of a comeback to the Italians thanks to 2 shots. They removed their goalie to play 5 on 2, but the Czechs held on and finally won 5 to 4. They proved once more that their country is still the boss of the international roller hockey scene.

The second week of the worlds is dedicated to the Senior Men's and Junior Women's categories. Stay tuned for the recaps of the upcoming games ! 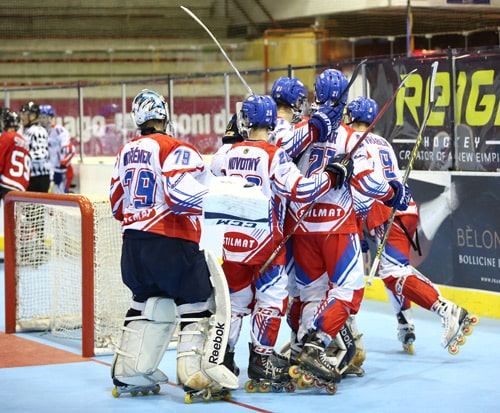 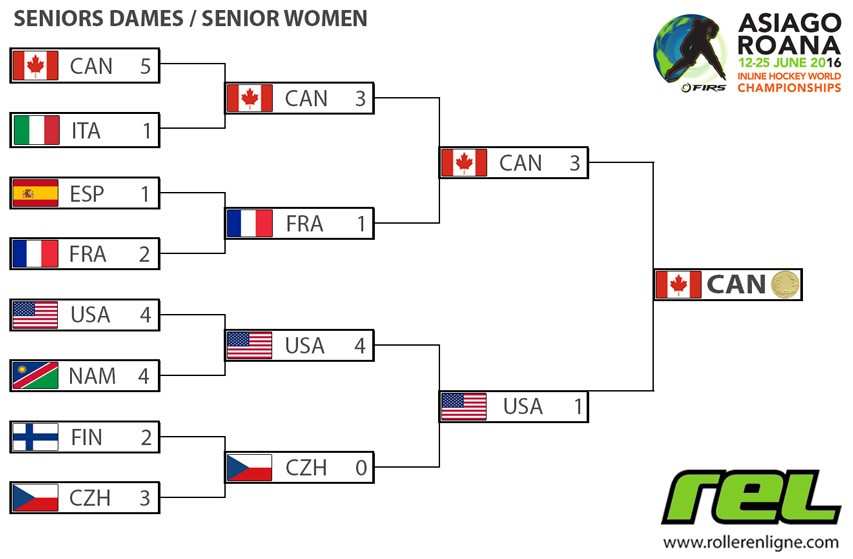 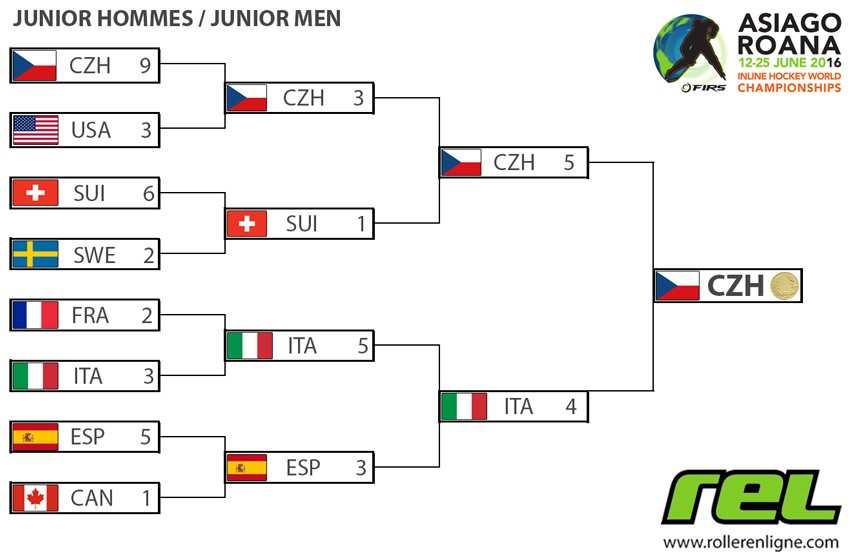