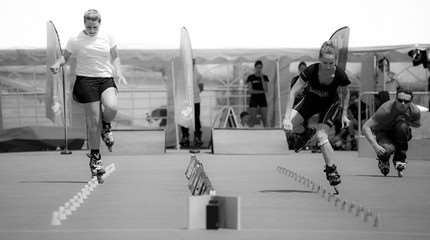 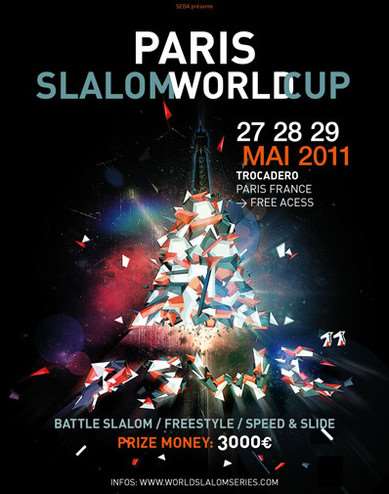 The event has resumed on Saturday morning with the key-competition of the day: Speed Slalom. The competitors are ready for qualifications at 9:30AM – after a short recovery for the most courageous girls who stayed ‘till the end of the night for the Slides competition.

The launching modules system tested at the PSWC two years ago, and improved last year, seems to be part of the event now.

However, athough the banks put forward the skaters at the starting line, they are unsettling for most of them, who are obviously not used to train, and to compete, with such equipment. As a result: a good cramp for the first-cone judge’s index… the bank extending the first paces of the skaters’ runs, they arrive on the line slightly ahead of their usual timing, and most of the time they jump over the first cone.

A little reminder on the competitors

“• In the Men’s category, the upper crust was there: they were 9 to belong to the Top-10! And 5 others were still in the Top-20… useless to say that the qualification places were very, very expansive. Especially when, moreover, there are 57 skaters for only 16 places…

• In the Women’s category it’s not much fun either. 7 are in the Top-10: the female leaders are also in da place. The rest of the 21 competitors is ranked further. But here too, with only 8 places for the KO Systems, everybody cannot afford to qualify.”

• The eight qualified for the KO Systems are essentially Italians and French, with one Russian lost in the middle. The Ukrainians and Polish are left high and dry.

• Cristina Rotunno (Ita, #6) is leading the qualifications with a perfect in 5.66 for her second try, improving her first run performance of 4 hundredths. Her steadiness pays off: she is the only one who manages two perfects for this round! Clémence Guicheteau (fra, #5, 2010 titleholder) qualifies 2nd thanks to her first run – a perfect too. The two are the only ones to qualify without penalties.

• Sara Barlocco (Ita, #2), one of the favorites, finds the door to qualification closed: she is 9th, 5 hundredths behind the 8th. I must say that she didn’t jump over one cone… but two! Greedy little thing. (Same remark for Chiara Lualdi who was more inspired in pushing harder). 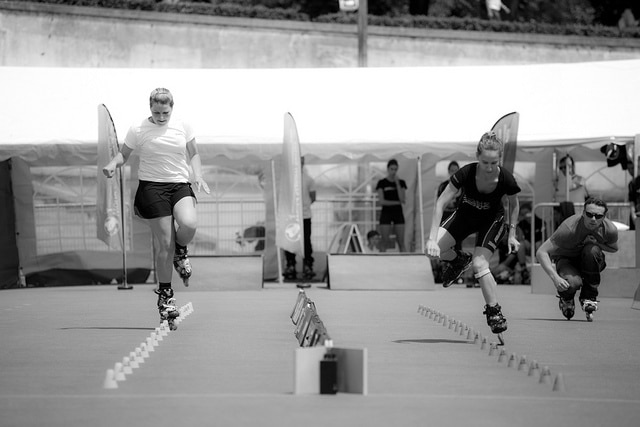 • In two winning rounds: While Christina Rotunno makes short work of Alizée Bert (two strikes), Tiffany Derisbourg copes with pressure facing Chiara Lualdi: although she gets heavy penalties, it’s still less than her opponent’s (5 against 7 penalties on the first round) and she is a few tenths ahead. Done!

• In three rounds: Clémence Guicheteau had a little fright offering the second round to Zoé Granjon, but she fixes it up and knocks her down with a perfect. She is far ahead too. The fight is tougher between Barbara Bossi and Kristina Lysenko, the 4th and 5th qualified. Three rounds are needed to separate them: it’s nearly a final in advance. Kristina shoots off and gets hold of the first round, Barbara strikes back and gets the second round… and continues her stride with a third run in 5.47: although Kristina does a perfect, it’s not enough to catch up with the Italian, even if the latter has a first-cone penalty. 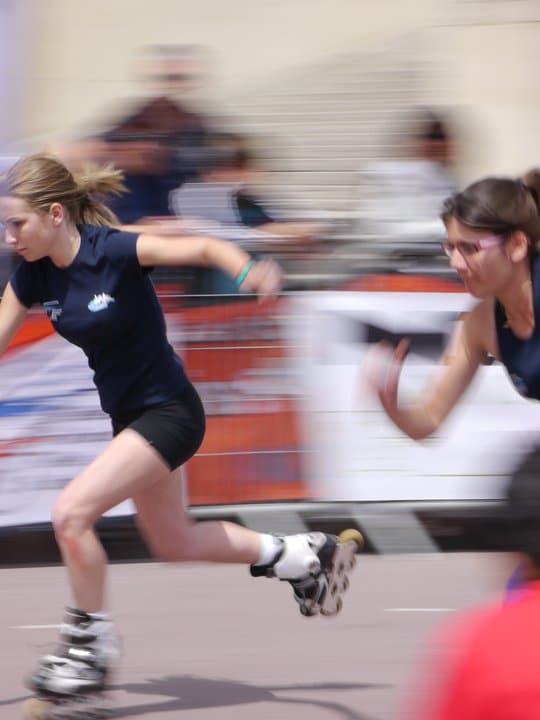 The semi-finals are fratricidal: the Italians are killing each other in one group, while the French are doing the same in the other group.

• France-France: Clémence Guicheteau, the favorite, is knocked down in two rounds by her team-mate Tiffany Derisbourg. The French have similar times (around 5.5). Tiffany has the advantage on the first round with “only” 2 penalties against 5 for Clémence. As for the second round… it was 5 hundredths close!

• Italy-Italy: In the Italian semi-final, Cristina Rotunno wins the first round thanks to one penalty less that Barbara Bossi, but she strikes on the second round. She slows down on the third one to play it safe but she still makes 3 penalties… as many as Barbara, except that Barbara is two tenths ahead…!

The consolation and the final are short work.

• Co-Final: Clémence Guicheteau, cleaner and faster, wins the co-final and gets the 3rd place in front of Cristina Rotunno.

• Final: Barbara Bossi has the advantage with a stunning 5.37 on the first round. Tiffany Derisbourg, takes up the challenge and answers back running in 5.44, but Barbara is on her heels (5.47) and she is cleaner. Barbara Bossi wins this edition, getting revenge on last year when she had cracked up in final.

Results of the Women’s Speed Slalom 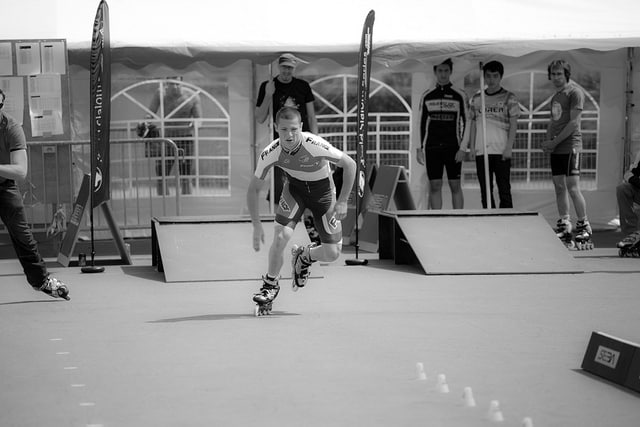 To give you an idea of how hard the qualifications were, let’s just remember that 14 of the skaters were in the World Top-20, that only 16 would be allowed to take part in the KO Systems and that they were currently 57… Just imagine the bloodbath at the threshold of the 16 places! And contrarily to what could be supposed, it was a general bleeding, outside and inside the Top-20!

• Maximum time: The time of the 16th qualified, Kirill ‘ReKiL’ Ryazantsev (Rus, #19) is 5.91. His best time is the same as that of the 17th, Davide Piacentini (Ita, #8) who mustn’t have ever seen his qualification flying away from that close.

• The head of the qualifications: Yohan Fort (Fra, #5), current European and World Champion and titleholder of the PSWC, gets the 1st place, playing safe with a perfect in 5.33. He is followed by Simone Nai Oleari (Ita, #6) with 5.39, and by Savio Brivio (Ita, #66) with 5.41 – an extremely fast opponent but whose performances are not very steady.

• The outsiders: Other outsiders like Savio Brivio came to infiltrate: they are ranked a bit further at the World Ranking, but their qualification times are proof that they are none the less serious opponents: Cédric Diguère, Pierre Célat, Marc Frémond, and Loïc Pasquier invite themselves to the party. 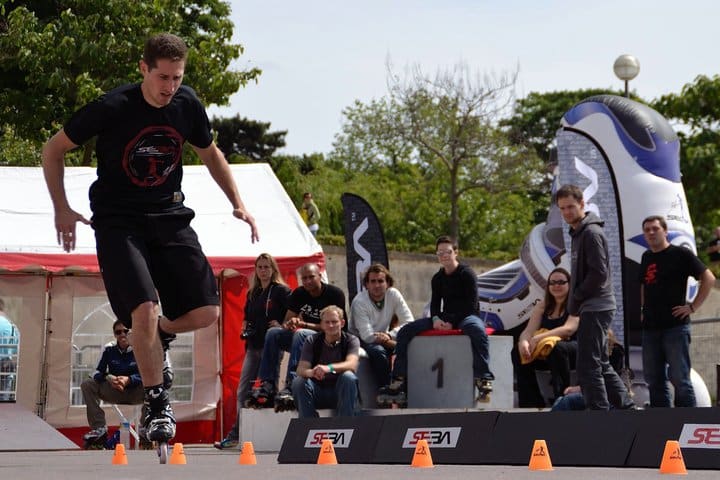 • Just like for the Women’s, the qualified are nearly essentially Italians and French, except for one indomitable Korean who still holds out against the Europeans, Kim Sung Jin.

• The Qualification ranking is going to seal the fate of some skaters in the most irrevocable way, with duels that could have been finals! It’s the case of Group 4, gathering Luca Ulivieri and Kim Sung Jin, World #1 against World #2. Luca wins the first round, Sung Jin ties… and wins after a very close third round. In Group 5, Romain Lebois is knocked out by the rocket Savio Brivio, less clean but so much faster that he manages to keep the advantage, despite two penalties more than Romain on the 3rd run! The third close fight is between Pierre Célat and Andrea Bellotto: the French has the advantage, loses it on the second round, and must have bitten his toes for the penalty that places him 3 hundredths behind the Italian’s perfect.

• The rest of the fights is less problematic: in general, the best ranked at the World Ranking knock out their opponents in two rounds. Yohan Fort, Marc Frémond, Robin Tessier, Tiziano Ferrari and Simone Nai Oleari sweep ReKiL, Igor Cheremetieff, Cédric Diguère, Loïc Pasquier and JB Milleret out of the competition.

• On the other hand, the 4th quarter final keeps everybody spellbound: Tiziano Ferrari against Simone Nai Oleari. Each one wins one round: a third round is needed. Simone deserves credit for winning the third round only 15 hundredths ahead of Tiziano. 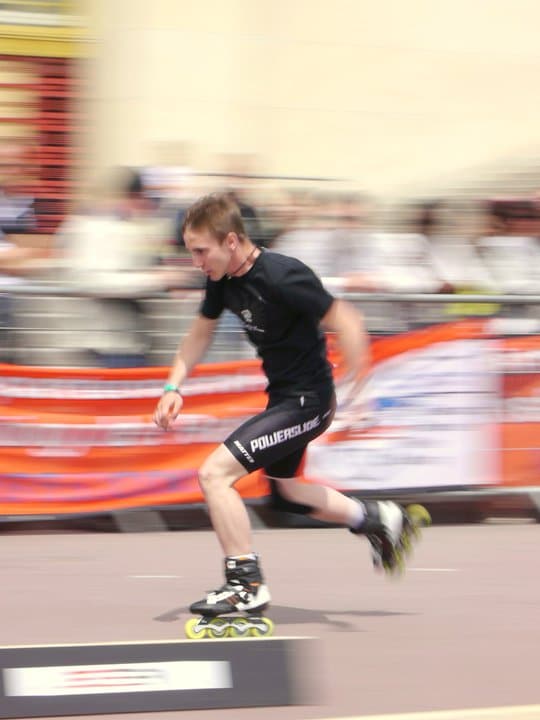 It was very close, though, that Kim Sung Jin tied and was allowed to play the decider (first cone penalty, again…) On the other hand, Savio Brivio didn’t let any hope to Simone Nai Oleari: with his first run in 5.08, he signs the best time of the competition – confirmed with a second run in 5.1.

• Co-Final: Simone Nai Oleari is leading the two runs with perfects, in front of Kim Sung Jin who cannot help but jumping over the first cone.

• Final: We were all very impatient to watch the final. Yohan Fort Vs. Savio Brivio. A cannonball Vs. a rocket. Savio Brivio, warmed up after his flash semi-final, continues his stride with a first run in 5.09. Yohan Fort is fast too… so fast that he puts his second foot on the ground: disqualified, Savio has the advantage. And this is when the improbable happens: it was just as if we had attended a re-run of the first round. The finalists take off… and Yohan puts his foot in it, again. No right of appeal, Savio Brivio wins the Men’s Speed Slalom Competition.

Results of the Men’s Speed Slalom

It does no harm just this once: We have a second winner as a result of these KO Systems: We have a brand-new World #1 at the World Ranking!

Remember the eight finals… Remember Luca Ulivieri, current #1, knocked out as soon as this very first round… And remember by whom… By the #2 who managed to unlock the final stage in winning the big boss. Being Freestyle World #1 was not enough for him, so he managed to get hold of the 1st place at the Speed Slalom World Ranking after a fight against the newly sacred #1.

There must be one happy guy: this one was not part of his collection yet!