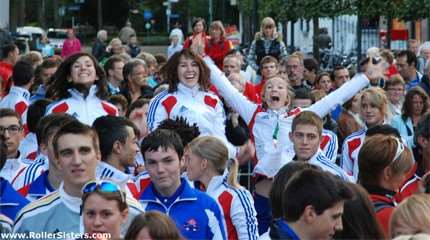 Gold for France, Italy and Belgium!

First race of the European Championship and first medal for the French delegation: Darren De Souza get the victory on the 300m time trial with 26'474. He beat the belgian Jore van den Berghe (26'709) and the Italian Mirco Mezzalira (26'862) in the Junior category. A good start to show the way to the other French skaters!

In the steps of Darren De Souza, Nicolas Pelloquin took the silver medal in the final with a 26'134 chrono. The Frenchman  has been dethroned by an incredible Ronald Mulder in front of his overexcited fans. The Dutch brought down an outstanding time  of  25'979! Julien Despaux get the  fourth place. The bronze medal belongs to Ioseb Fernandez (Spain) with a 26'302 chrono.

Mosf of the skaters admitted that the track is not necessarily fast. It is also true that the weather does help to realize performances: it is very cool in Heerde, the sky is low and really cloudy. The wind is really strong in the opposite straight before the finish line...
In senior women 300 m TT, the times are around the 29/28 seconds except for Italy's Erika Zanetti, who has largely won in the Elite with a time of 27'993! Jana Gegner (Germany, 28'566) and Desirée Content (Italy 28'657) took silver and bronze. 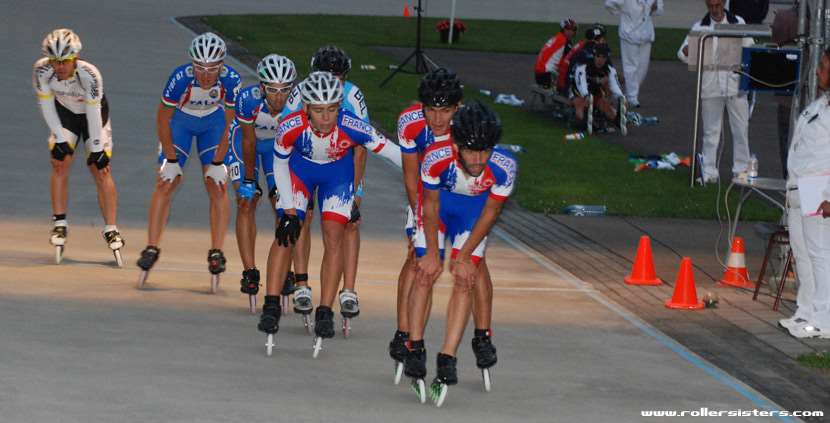 The elimination races are finals. No qualifications. The races started around 19:30 with the Junior Women in really cool temperatures.. is it fall or what?
Margot Pouydebat made a lot of work to protect Marie Poidevin in the first race of the evening. The french skater has led the most (nearly half of the race), always trying to get out of the package to bring her leader to the head.
In this race, the Italians seemed the most dangerous (there were three of a fairly homogeneous). Margot was able to protect themselves from elimination. She took the fifth place. Marie has launched his sprint with three laps to go, with Germany's Katarina Rumpus in her wheels. Katarina Rumpus tried to disengage the French women in the last two laps. She finally succeded in the last straight line. Gold for Germany and Silver for France. Sofia D'Annibale (Italy) finished third. 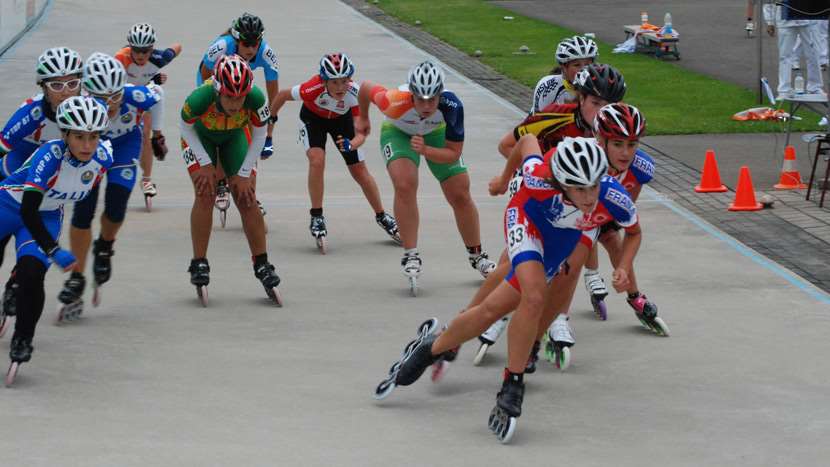 No chance for the French Junior Joris Gardères. He had managed a very serious race until he fell a lap and a half to go, shot in flight by Belgian Siemen Tas. This final of the race was really impressive. Many nations took the start with full teams of three skaters (Belgium, the Netherlands, Italy, Spain, Switzerland and France). Skaters really had to fight to find a place to be on the front... such as Guillaume De Mallevoue, he got two warnings by protecting his leader, Joris Gardères. Aurélien Roumagnac, responsible for leading the french team, also worked a lot.

But it is a Dutchman, Ruurd Dijkstra, who has been the most impressive during this race. We have seen him leading almost three-quarters of the race. He resisted almost to the end, taking the silver medal behind the Belgian Tim Sibiet. Special mention also to Portuguese Martyn Dias and Swiss Livio Wenger who had to fend for himself in this big pack. The first named has unfortunately fallen to 14 laps while the second ends in the latest eliminated. Aurélien Roumagnac finished fourth, despite his fall, Joris Gardères got fifth.

Nathalie Barbotin comes back for France!

The hot shot of the evening came from a thirty Nathalie Barbotin. Se clearly showed she still had the legs to win or more! In a race with 17 competitors, Italy, Germany and France have made the law, the French took the lead early in the race. Especially Justine Halbout and Laëtitia Le Bihan. They did everything to protect and assist their leader, but Nathalie Barbotin has also done an extensive work on its own. In the last five laps (of 50), while Le Bihan was back in the lead to prepare the way and prevent her from attacks by the Italians and Germans, Nathalie Barbotin began to prepare her sprint. A straight line before the bell, she launched the attack: Jana Gegner  took a few meters late... she could never fill the gap. Nathalie Barbotin took the time to raise her arms to the sky to celebrate his victory! 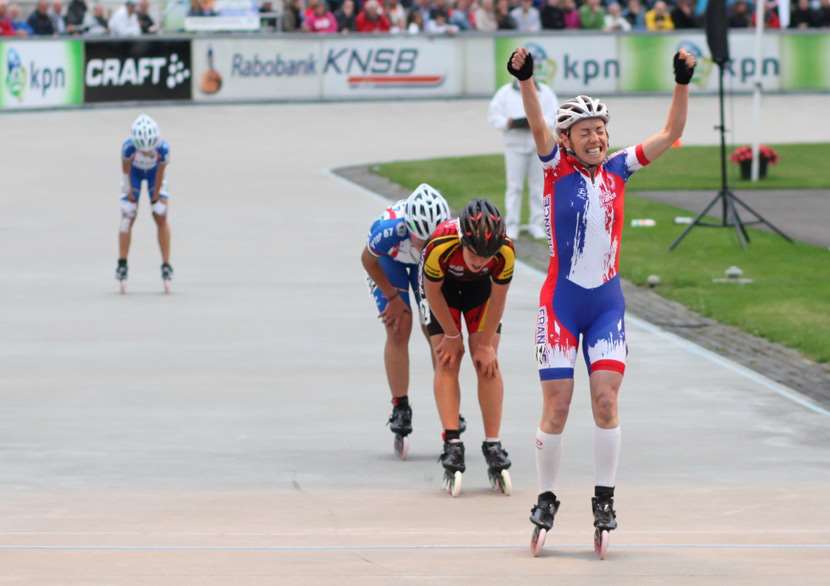 The last race of the evening has been the highlight of the show. The senior men 15km elimination has kept all its promises. The Dutch were the first to attack in front of their supporters: Ingmar Berga, relayed in the last twenty revolutions by Crispijn Arians. He has been used and outnumbered by the other teams. The Spaniards have been very vindictive and quarrelsome. Conversely, the Italians have been very discreet... The French skaters have operated very well, Yann Guyader helped by Ewen Fernandez and Brian Lépine protection. Brian Lépine has made a lot of counter-attacks to prevent the rise of the Spanish skaters, while Ewen Fernandez had took the lead of a second package to lure other enemies. The Belgians much rested on the shoulders of Bart Swings: his brother Maarten and Ferre Spruyt threw all their forces into battle to protect and help their leader.

In the end, the three favorites in the races are almost face to face: Guyader took the lead first, two laps from the end of the race, with Bart Swings and Fabio Francolini (Italy) immediately in his wheels. Feeling the urgency to pass the French skater, Swings took the lead in the last lap. Fabio Francolini was still in his back before the arrival. Yann Guyader, slightly behind the two skaters, had to settle for third place.
After this first day of competition, the French therefore fall with two gold, two silver and one bronze, five medals. Italian and Belgian also got 2 gold medals... 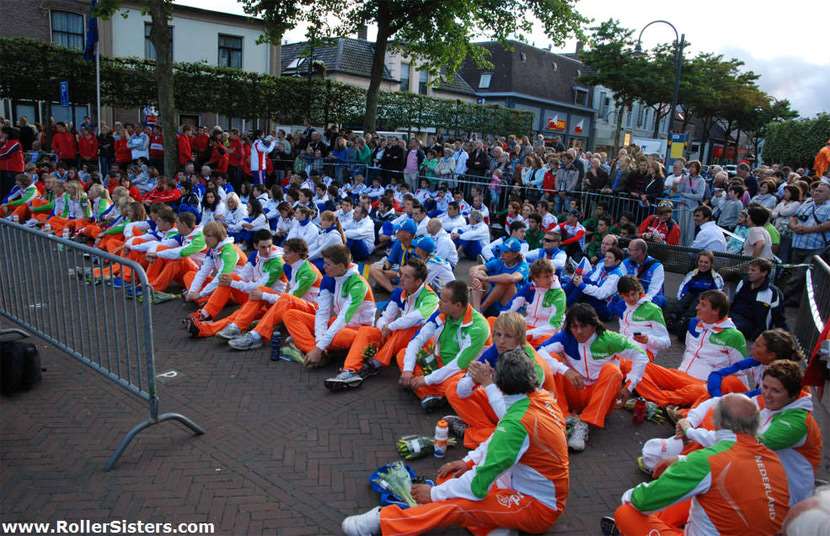 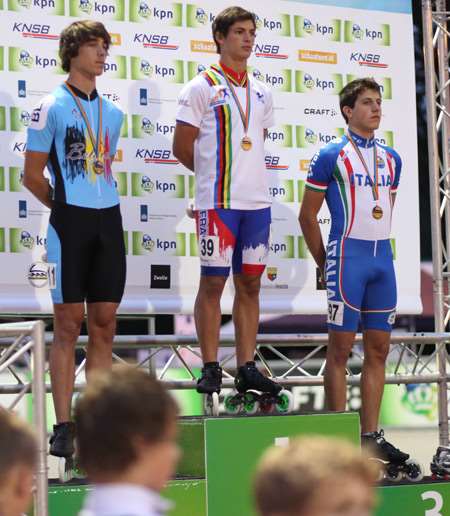