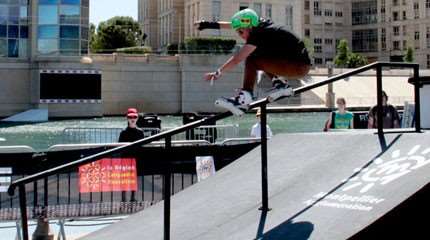 Three events in one 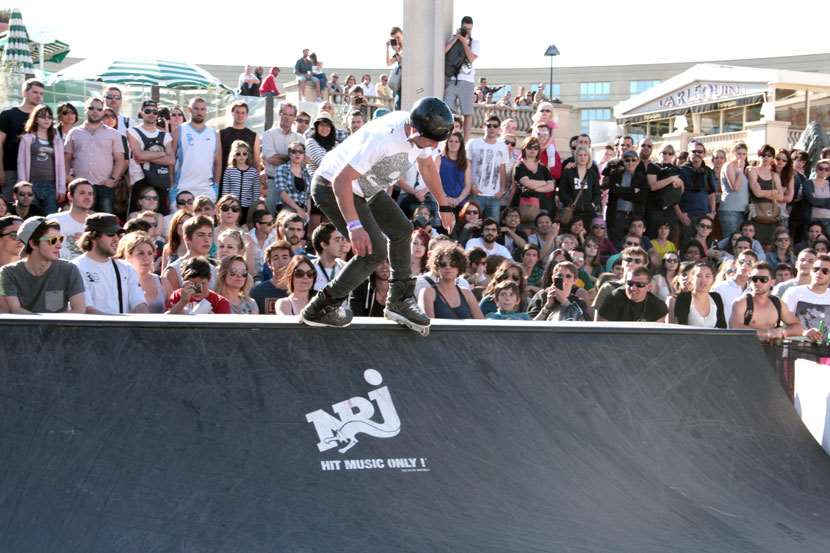 The pro skaters had the time to prepare their lines for a final that promises to be thrilling. The triple winner of the competition, Romain Godenaire, has something to worry about because suitors to the title such as Roman Abrate and Stéphane Alphano intend to seize the first place.

English Nick Lomax, winner of the Gladiator Contest, doesn't lose countenance with a clean run which offers him the 10th place of the 2013 edition, a tie with Rémi Santos, 18, sponsored by Clic n Roll. The young man won his ticket to the pros' thanks to his podium in the amateur category.

Stéphane Torres, with 6 runs since the previous day, doesn't spare his energy either, with true sunnydays and king grinds. Anthony Avella does a good job with his line made of grinds and very clean rotations, which rises him to the 7th position. Stephen Swain does 900 corkscrew on the second quarter-pipe and ends with 450 back royal and reaches the 6th place.

Level up with the Seba Team skaters: Australien CJ Wellsmore and Anthony Pottier use the slopestyle in a very different way from the other competitors. CJ skates fakie around half the park and launches full torque in getting up a rail to transfer doing backslide on the rail above. An original line which enables him to ge the 5th place.

Anthony makes a strong impression on his second run. Indeed he impressively manages to do wonderful fishbrain rocket on the curb and 450 top soul on the rail. A skater to be watched closely next year. He seizes the 4th place with panache.

The three leaders are 100% French. The skaters know each other well and never give in despite the pressure. Romain Godenaire opens the ball doing double backflip and successful alley oop mizu. A spectacular run which won't be enough to dethrone the two leaders of the qualifications. The winner of the 2013 WRS ranking, Roman Abrate, doesn't intend to play a secondary role and proves it with  double hot flip 180 called the Kangaroo, with a good landing. He uses the park to the max: true spin sunnyday, wallride and back sav on the rainbow. A disconcerting run that Stéphane Alfano tries to live down thanks to nice rotations such as 900 as well as back royal on the rail upwards to back royal on the rail above. A neck-and-neck situation which the judges separated with 1 point only. Winning the day before the invitational, Roman also wins the slopestyle and announces at the prize giving that he aims at the grand slam.

Just after the prize giving of the slopestyle, we join the skating community with pleasure at the rail of the Place de l'Europe, behind the restaurants to attend the rail contest.

This year the Clic n Roll shop supports the event, inseparable from the FISE. Only a few brave skaters throw themselves into it, but there is Guillaume Legentil, the winner of the 2012 edition, doing top soul which all the other participants manage without problem, event young Laurent Allessandri, applauded last year for his doing back royal from all of his 14 years of age.

Further to the unfastening of the rail, everybody migrate to the rail on the other side of the place to finish the competition. The juniors are over-excited and liven things up while the day is ending.

A lot of falls and retches give rhythm to the contest, but once again it's Laurent Allessandri who wins unanimous support doing fishbrain christy old school, then zero spin king grind. 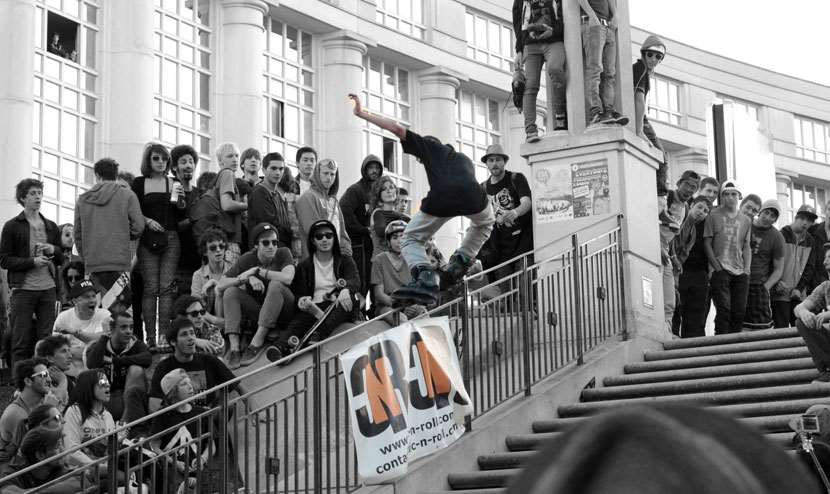 Women's final: Amandine Condroyer is a cut above the rest 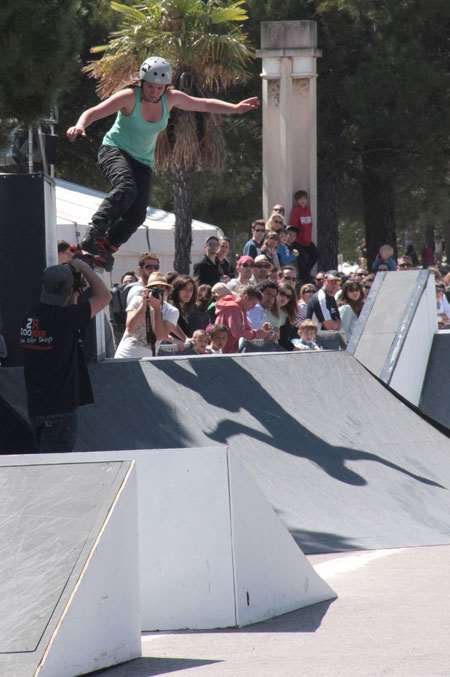 Mathilde Monneron, winner of last year, showed us the previous day that she intended to renew her feat. On Sunday she masters the slopestyle doing good 540 on the second quarter-pipe and top soul on the coping... but falls. Quite an explosive run which brings her to the 3rd place.

She doesn't leave the other competitors unmoved since Maria Munoz Diez nicely does negative mizu on the curb and easily overcomes the obstacles to finish with soul to top soul on the rainbow.

But let's not forget to take into account Amandine Condroyer who does a sensational comeback. A clean run made of 360 and successful top grinds. A final full of twists and turns which crowns Amandine, leaving the second place to Maria.

Amandine will have an attempt at backflip to celebrate her victory but she won't manage the landing.

Let's quickly regain our composure, because it's almost time for the final of the ramp with spine at the other end of the FISE...

Under a cloudless sky, the skaters don't have much time to warm up but they won't disappoint us. That final is the last skating competition of the FISE.

Let's note that the pro skaters always answer the call and that new faces snake in and out amongst the top-5, especially English Julien Swindells who shows that skating ramp with spine was easy as a pie. He follows up switch ups and rotations with a disconcerting ease.

However the regulars make short work of him, especially Anthony Avella who is peerless for bringing back old school tricks into fashion, such as liu kang, flat spin or safety grab. A cleanliness and an amplitude that cannot be found in any of his opponents.

As for Roman Abrate, he intends to win the three pro skating competitions and delivers a perfect performance with a stream of alley oops and countless rotations.

The greatest surprise of the 2013 edition is English Nick Lomax. He impresses us with his technique as he spends the whole run skating fakie on the ramp. He easily manages his tricks and the public is excited in front of such great feats. A highly deserved victory to the great dismay of Roman Abrate who gets the 3rd place. See you next year for the grand slam!