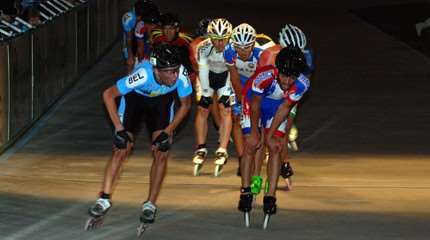 Bart Swings always at the top 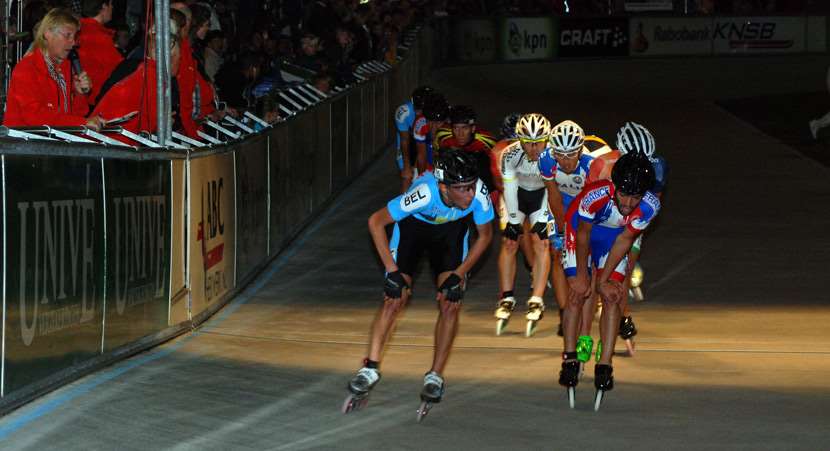 In the junior women race , the Italians may have won this very tactical race from the start, by launching a duo to attack, they grabbed points . With 12 points in his pouch, Sofia D'Annibale has quite clearly won the title. Both Rumpus Katharina (Germany) and Marie Poidevin have "awakened" too late ... When the French took the race in hand, she managed to lead in front of the pack. But the Italians have remained relatively well-organized as ten laps remaining to block Marie Poidevin. Katharina Rumpus  even takes silver for two points.
Podium: Sofia D'Annibale (Italy), Katharina Rumpus (Germany), Marie Poidevin (France).

Junior men have delivered a crazy race. We have only seen the Dutch, Belgians and Italians at the start. The three French skaters, Joris Gardères, Guillaume De Mallevoue and Pierre-Yves Péridy, initially expected in mid-pack. For the record, the Swiss Livio Wenger had to ally with the Austrian Tristan Ulreich to be able to score some points, as the race seemed locked by strong nations.
In mid-race, Martyn Dias (Portugal) escaped with Ruurd Dijkstra (Netherlands) in his wheel, we might even believe the race was done: especially since the Dutch had a real forcing to go and score as many points as possible.
Behind, the Italians were leading the hunt: an initiative that would be fatal. Once the escaped duo back into the pack, Pierre-Yves Péridy attacked for the French camp. In his wheel, Joris Gardères, he was taking to a bunch of points, and a well deserved silver medal. Impossible to dethrone Dijkstra, which is first returned in the leading pack... and escaped again to take the points of the second place in the final sprint. For the record (again), Livio Wenger won the final sprint.

Video of the senior women race

Women race: strategy above all

She held her medal firmly. In a race where she had to thwart the tactics of the Italians and Germans, Laetitia Le Bihan got nine points, enough for a silver medal. Except that the French was eliminated in the last laps abd the last eliminations.
It's a pity! In the meantime, she had a strong race, well-structured, supported by Nathalie Barbotin. The French skaters had managed to reverse a situation that seemed compromised in the first third of the race, They countered a breakaway of four including two Italian women (Francesca Lollobrigida and Arianna Arcidiacone) and two German (Mareike Thum and Tina Strüver). Nathalie Barbotin brought the pack with her before the halfway of the race. She put Laetitia Le Bihan on the good path towards the podium. The rest is history ... In this race, Arcidiacone won with 10 points while Lollobrigida took silver to Mareike Thum in the final sprint. Both of the skaters gleaned 8 points each. Nathalie Barbotin who has worked for Laetitia, finished fourth.

How to block the way to Bart Swings? The issue is recurrent in the Elite category. The French had prepared a plan nearly perfect, they have applied it with conviction. We can not say it was useless because Yann Guyader took the silver medal. He seemed to be the only one able to compete with the Belgian. But on the finish line, the point spread is quite large anyway (31 for the first against 15 for the second).
The two stars had to engage their forces early in this race: Yann came out first with Brian Lepine to pick up points in the second intermediate sprint. Bart Swings, feeling danger, immediately countered with Brian. He flew into a points race in the evening. The Italians and especially the Dutch hunted, despite the attempts of Ewen Fernandez and Ferre Spruyt to protect their leaders.
When the packs regrouped, Bart had 12 points and Yann 4. It was enough for the Spaniards: Patxi Fulani and Eugenio attacked to the benefit of Peula. Then, the points of Peula was near of Yann Guyader. Ewen Fernandez levelled... but as soon as the Spanish back into the pack, Bart Swings came out of the pack with ease. One felt the Belgian held to victory... and Yann, a little further calculated the silver medal. The Dutch put their strenghs in the fight to reach Bart Swings but it was uselesss. The pack ate them. Bart Swings was still mopping... Event Paxti Peula attempted to overthrow Yann Guyader of his second place. He came out in the last five laps. The French could still count on Ewen Fernandez in the final laps: Ewen has really sacrified to continually support his leader and allow him to secure his silver medal! It's still Bart Swings that left the last impression on the track. He emerged again from the pack to harvest the last points, as if nothing had happened, exhausting his remaining opponents left ten yards back... The crowd is already impressed and charmed.