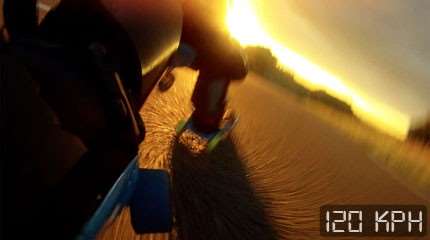 The story of the attempts at record breaking by Buggy Rollin' 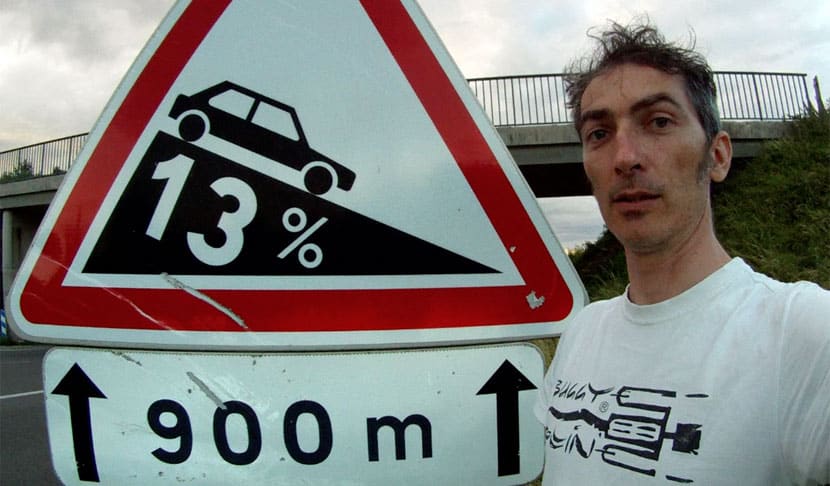 "I tried to break my speed record today at Lons-le-Saunier (39) on the Montaigu road. I did 106 kph then 111 kph. I changed helmets and plastrons and I started from the highest point. The helmet is less profiled and smaller but it holds the head better…

Oops! I did not think that the night was going to fall… The helmet has a tinted visor! I had waited for twilight to avoid cars… indeed there is really less traffic. It is even darker. It is hard for me to find my bearings. I go along the white line in the middle of the road, just a few centimeters next to my left shoulder.

I pass my starting point at 50 kph at least. The downhill is very stable with the golden chest because it has 180 trucks on it. The chest is tighter and the driving is then more precise.

First bump on the road, it is now a 13% gradient, it gets faster… it is scaring… POK! Did something touch my wheels? What was it? A pebble? A branch? I did not see it coming… Yet everything seems stable… Despite that frightening speed which keeps on increasing… Will I be able to brake down the hill? Will the change of position from speed pursuit to braking be stable? Will the wheel-set react well? 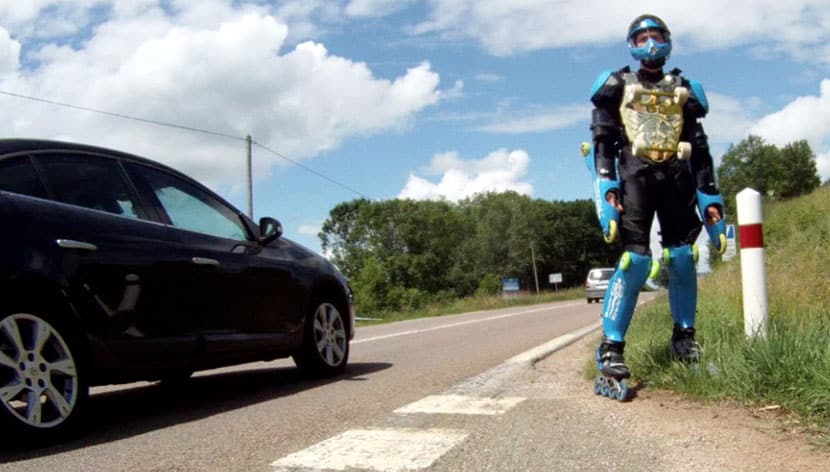 Oh! There is a cat on the side hesitating to cross! What if I hit it with my head… or with an arm? It finally turns back  and I avoid it with a bend.

Second bump on the road. It is very impressive, and you wonder if it is going to end well. And then the end is getting closer and you have to resist the urge of braking as it is the fastest part. You have to trust in your training and in your tracking: you do have time to brake. The problem is that you cannot see the braking zone, hidden behind security walls… and in the end, there is a roundabout.

Holding on. Keeping the position. Delaying the opening. Staying calm. Managing the weight bearings… Alright, let's open. I open the arms… everything goes well. Let's test the grip of the wheels for braking, a few vibrations say that the wheels will grip.

Braking. It is over. I put myself on the side, go to the car park and look at my GPS, panting: 116 kph, that is the previous record.

If the conditions are good, I try again tomorrow. 117? Maybe… it is not going to be easy! I don't know what to improve… One more little kilometer!"

A few modifications in order to bring more speed?

"Yesterday, at the end of the attempts at record breaking, it was late and I was lacking light. I was a bit disappointed to have only reached the speed of the previous record (116 kph)… exactly the same speed, that is quite surprising! I wanted to try again… my driver suggested to try at midday.

I go to sleep wondering what I can do to go faster: 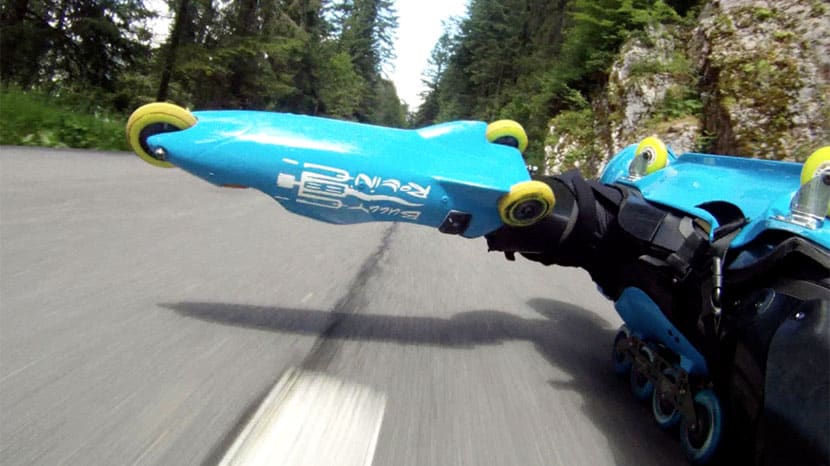 The night goes by and I have a few doubts as for the possible improvements, the weather, the traffic… We go downhill on an open road on a former national road (aouch!) Will it even be possible to have a second try…?

The weather is nice. The driver is ok to try again. He found me some WD40 and silicon lubricant… Not bad! It can work. I check the roller-skate wheels. Perfect. I change the wheels at the knees.

First try. It rolls even less that before! Do it again… That is better! I have a look at the plastron wheels. Not that good. I clean up, lubricate, I get uphill, it creaks… Noise? I resume the inspection. I turn the discs… It was it! It works!

Oops, it is already time! We jump on the car, I stick the camera on the front, I quickly slip on the armor…

Damn, there are cars in line behind a mobile home. What a pain! It is slow, it makes traffic jam… we have to give time to the road to digest all those big bites. Nobody in front for a minute. Nothing behind. Let's go!  We shoot off from uphill. We really start from the highest point and it is completely flat. You have push hard.

And let's go!  Still two double pushes and I go flat on the ground. Big sunny weather, I can see everything.

AAAAh! A car is waiting to come out! Hopefully, it saw us and waits.

As I can see clearly, I take the closest lines to the grass on the right. I lick the white line on the left. Everything is fine. It is still very impressive but it is less frightening than in the dark of the night.

There's a shock, like yesterday. I don't know what it is. Once again, I didn't see anything, it must be a joint in the asphalt. I am so close to the ground that it does not show.

The road plunges. I have the feeling of flying above the asphalt, It goes faster and faster. If I lower my head a bit, I can feel the wind getting in my back. I adjust the position for it to caress without ripping. Just like the breeze, I go… by the way, I slow down my breathing, it is useless to hyperventilate. In the end, I enter the compression. I open my arms.. Wow! What an air brake! I did not remember that the air made such a pressure yesterday…

I clear the road. I have doubts. Not sure I went faster. I undo the back of the armor. 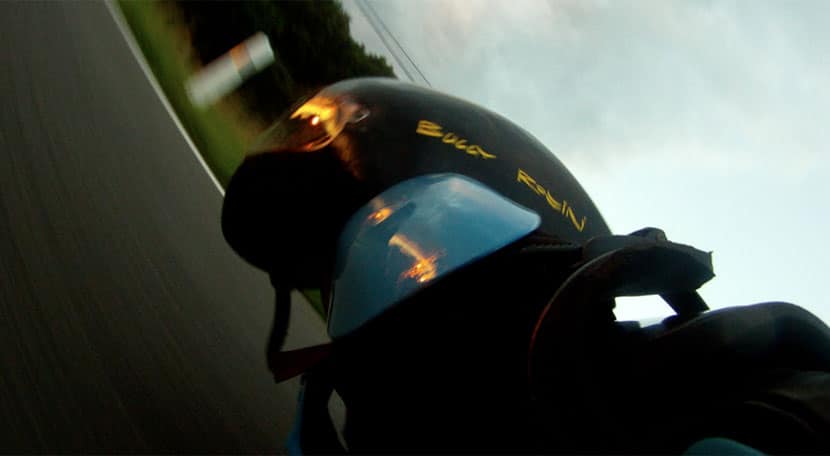 To learn more about Buggy Rollin, please visit  the buggy rollin section of online-skating.com and read his last interview ...