Back on the 2013 General Meeting of the FIRS 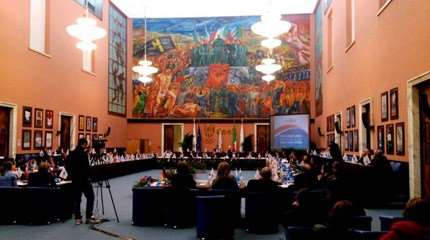 At the heart of the international authorities 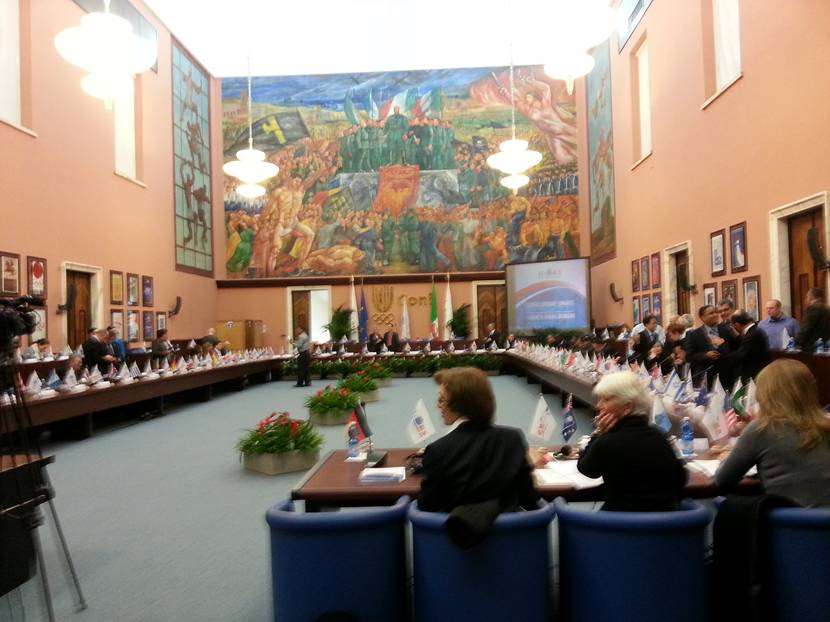 Friday afternoon. Meeting at the head office of the FIRS, North of the Roman capital. The FIRS is at the third of the eight floors of a building gathering other Italian federations, such as ice hockey, golf and equestrian sports.

It is entitled FIHP (Italian Federation of Hockey and Skating). Each federation has to register in order to get its accreditation, and its voting rights (in the form of three signs: yes / no / abstention) as well as elements relative to congress (status proposal, items on the agenda, etc.) 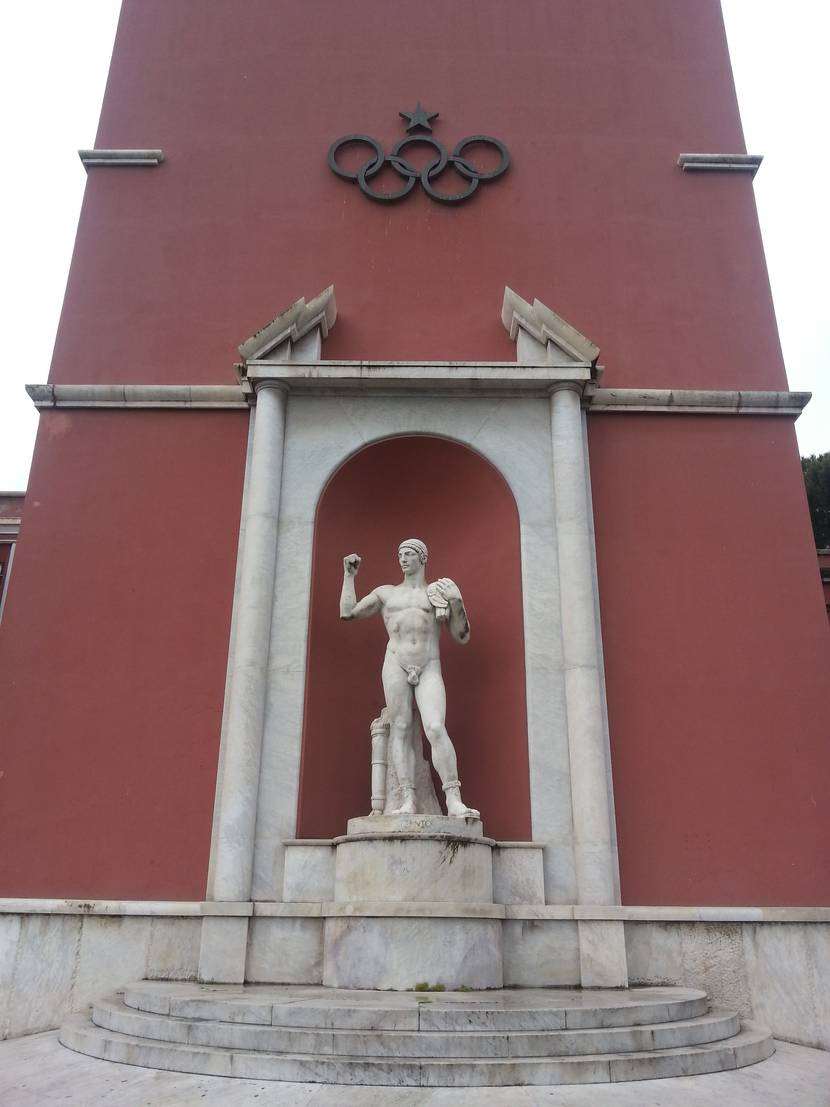 Then there was a pre-dinner drink at the second floor where the different participants could make contact and exchange with each other. On the evening, there was a dinner downtown next to the Vatican.

On Saturday morning, the annual FIRS congress was taking place at the NIOC (National Italian Olympic Committee). The session started at 10AM, once the translator arrived (English and Spanish being the two main languages of the FIRS).

After an introduction speech, several video commercials on skating at the Olympics are shown. Then the date of September 13th in Buenos Aires, Argentina, where the new sports joining the Olympics will be defined, is reminded. Let's note that the General Meeting is broadcasted live on the Website of the FIRS.

Approval of the previous moral report

Hervé Lallement (National Technical Manager of the French Federation FFRS) is part of the electoral commission for the checking of the votes of the day. He has much to do during the day.

In terms of figures: 55 federation are there and represent 161 votes. Countries such as France and the USA have 5 votes (the maximum for a country) because of their presence on all the disciplines of the FIRS.

The first vote concerns the summary of the last meeting. It is validated with only 2 abstentions.

A quick history of the FIRS

The president of the FIRS, Sabatino Aracu, reminds that the Federation saw the light 80 years ago with Hockey in Montreux, Switzerland. Today, lots of disciplines are recognized. New disciplines such as roller ball (very popular in India) and roller ski have been contacted to join the FIRS.

We learn that the main sponsor of the FIRS is one of the main manufacturers of floor covering for skating. We also learn that television rights have doubled.

The president states his determination to have a world championship in 2017 that would be common to all the disciplines of the FIRS.

Benin is officially a new country with a voting right, just like Ghana, Poland, Serbia, Sweden Inline Hockey, Trinidad and Tobago. The Polish case is raised: the country is proposed but delayed as it is already part of another federation.

Skating and the Olympics

A survey was made on the Internet to know which sport should be added to the Olympics, and skating would have taken the first position in front of all the other sports. Golf invested 2 millions of Euros into its video commercial for the Olympics. Skating did not even have a budget: "Money makes war!"

Election of the president and vice-president 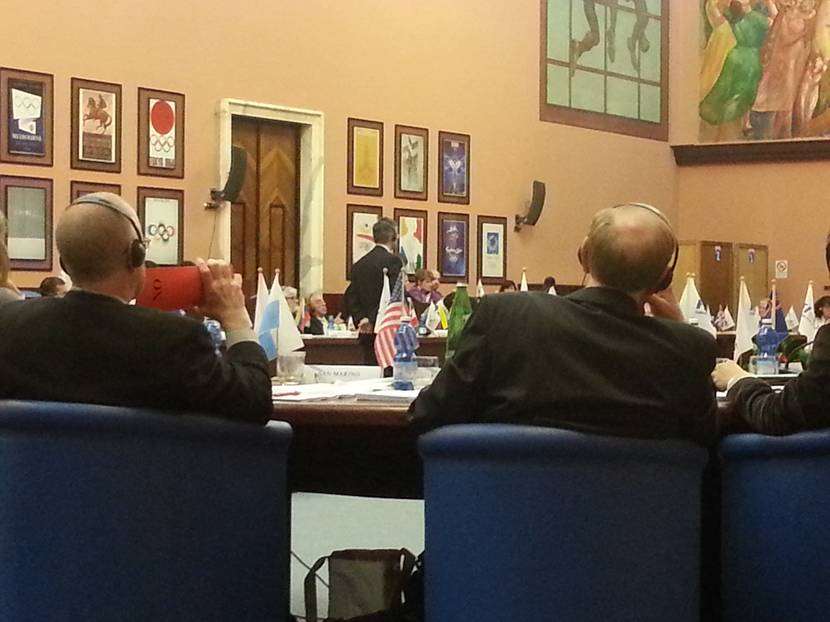 The election for the presidency of the FIRS (for 4 years) takes place. It opposes current president Sabatino Aracu (Italy) to Georges Kolibaba (USA). President Aracu is confirmed at his position with 115 against 46 for M. Kolibaba. No abstention on that vote.

The second vote is on the vice-presidency: Australian Valerie Leftwich against Chilean Armando Quintanilla. The vote analysis is closer. Quintanilla finally wins with 81 votes in front of Leftwich, 80 votes! Let's note that there were 6 abstentions on that vote.

Approval of the accounts

The morning ends up with the approval of the annual accounts and of the 2013 budget. It is already 1:30PM and the lunch-break is shortened to 45 minutes because the Meeting is already running late.

Changes of statuses: a hectic vote

In the early afternoon, the main subject of the day (after the elections) is the change of statuses of the FIRS. The aim of the reform is to make the representatives be designated, instead of elected as currently. The whole afternoon was dedicated to that subject. The president introduced it. He wanted to launch the debate and get the opinion of the meeting.

Lots of countries gave speeches in order to expose their view points and two sides appeared:

The first principle vote is launched, validating the will of the congress to change statuses. All the articles are then validated, one by one, more or less quickly. Let's note that the only votes "against"  were for the statuses questions. A pitfall appeared concerning the designation or election of the representatives of the Technical Committee, with a lot of back-and-forth.

As a reminder, the executive committee of the FIRS is made of the president, the vice-president as well as the 4 representatives of the historical disciplines which are speed skating, artistic skating, inline hockey and rink hockey.

At the same time and according to these new statuses, technical committees are implemented on the disciplines gathering at least 20 different countries. The disciplines in question are:

At 6PM, one of the professional translators having finished his day, he has to be replaced by a translator of the federation which disturbs the progress of the debates. At 7PM, the subject of the statuses is complete.

The moral report of the committee representatives as well as of the Pan-American confederation are done. President Aracu finally concludes the FIRS congress. A last group picture is made and the federation representatives leave the NIOC. 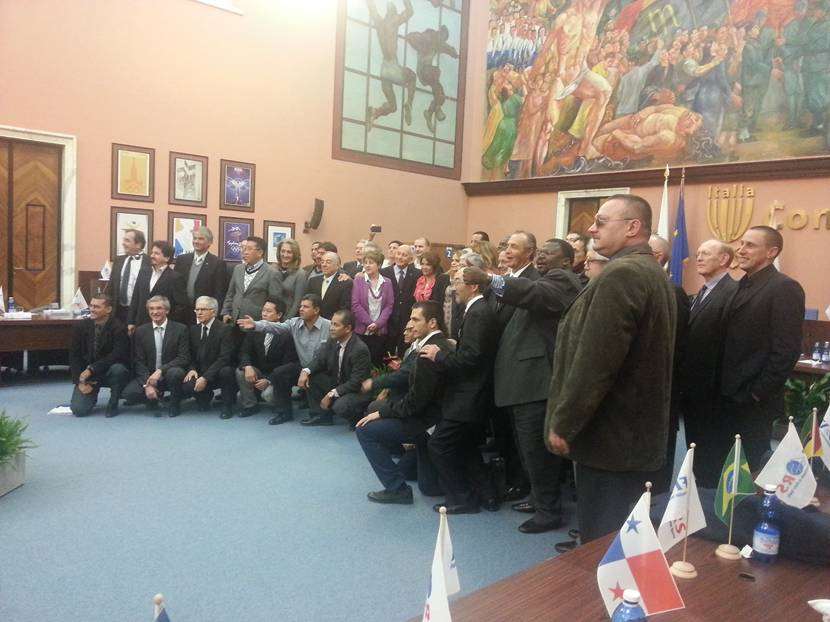 Sabatino Aracu, president of the FIRS