First stage: warming up between Besançon (France) and Montbéliard(France) 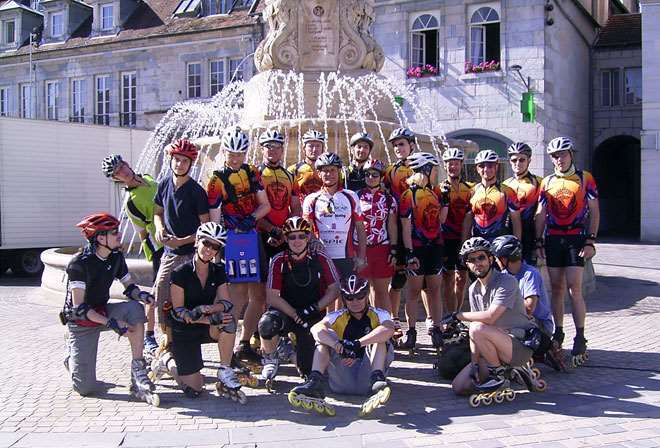 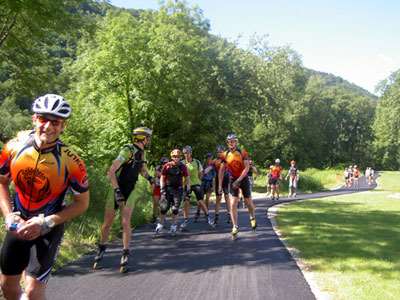 For the program of this first day, the banks of the Doubs river were the scene of the rollerblading raid between Besançon, France and Fribourg, Germany for the first time.

The kick-off was given à 9.30 at the very heart of the city of Besançon, France: at the Révolution place. Twenty skaters, 4 staff members and co-drivers loop backed around the citadel and left the town center. They began striding along the typical meanderings of the Doubs river and passing through the locks, one after the other, before arriving in Montbéliard, France.
After a few breaks and snacks (the Alliance Glisse de Franche-Comté association provided the food), the runners were full of energy to skate the 55 first miles until Froidefontaine, France, at the border of the Doubs subdivision (administered by a prefect). 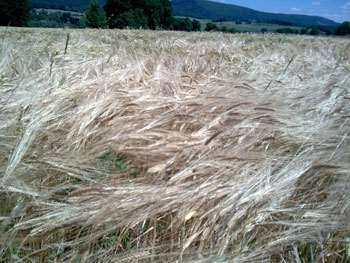 The skaters who wanted to go faster overtook the groups skating at their pace. The runners skated along different roads (specifically designed for skaters and bikes for instance) one can find along the Rhin-Rhône canal or the Doubs river. The skaters often let them exhilarating by speed as the GPS revealed some good top speeds.
The day ended by 6 pm. A shower at the hotel, a common meal and some of the skaters had a digestive walk … First cramps soon made their apparition. For some of them, this first "leg" was a baptism of fire. And for other senior skaters, the ride of the day after would be a very good training in view of mythic races such as One Eleven or "24 heures du Mans".

Second stage: about 85 miles to skate. 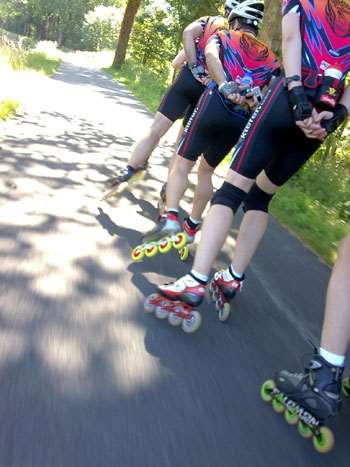 The runners were faced with a puzzle: how can I avoid blisters?
The runners had to leave early. Heat has grown over the weekend and summer temperatures were announced.
Everybody filled one's flask as 30°C were announced during this long day. Just before leaving, a few instructions were given in view of these straight portions ... "Go as fast as you want"!

9 am: The skaters left Froidefontaine, France

They arrived near the locks at Dannemarie (in the Territoire de Belfort, France) and knew they would enjoyed technical descents where they could reach almost 18,5 miles/hour.
They arrived at Mulhouse, France, where they had a break then took a car to avoid the town traffic jam.
The skaters took up the race again at the foot of the Napoleon isle near Mulhouse, France. The skaters reached 18,5 miles/hour, they were in pack (one could imagine it's a FIC Open), and came down along the Rhin-Rhône canal ending at the lock of Niffer, France. Everybody could rest and had a picnic in the shade.
The countryside roads of Alsace region, France, were lined with lanes. The skaters rode up until the lock of Fessenheim, France, where they crossed the border and found the German vineyards back.
Some signs already indicated the arrival point, but the skaters had first to skate through industrial zones and welcoming villages. 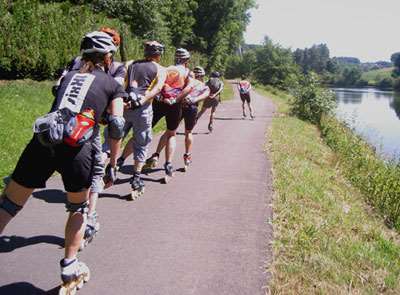 Most of the skaters, women and men, now felt exhausted. Heat and the reflection of the sun onto the asphalt worsened this situation. The wind helped the pack of skaters go faster. They felt secure.
The runners had a last break at Kirchhofen, Germany (where everybody could eat cherries at will, the speciality of the region), bananas bought the day before were swallowed in one go, and the skaters filled their "camelbacks".
The runners skated through some villages before ending this trip with uneven hills.
The skaters came into the town passing along the river by a highway which is a lane often crowded by joggers, bikes and skaters.
The raid ended with a friendly meal and a speech from a town councillor of Fribourg, Germany. Everybody already planed to make the journey back. 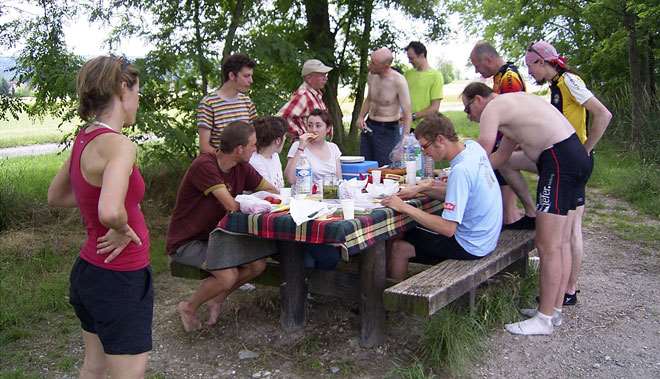 German web site of the raid
rando-roller.over-blog.fr
Article in german

About the Author: Vincent