24 Hours with the Powerslide/Ligne Droite team 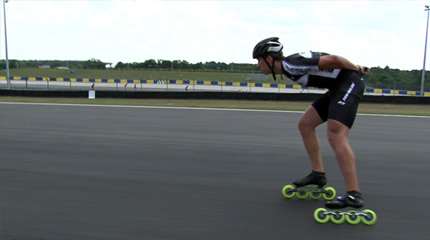 The Powerslide brand associated with its national dealer on racetracks, the www.ligne-droite-roller.com shop presented a head-spinning team for the 2010 edition of Le Mans competition.

Just for fun, let us list the exceptional pedigree of the Powerslide/Ligne Droite team members, starting with the best-known skater in the black and white team : Yann Guyader.
The frenchman never took part in Le Mans competition and dreamed of adding it to his already long list of successes, just for sake of completion. To put it bluntly, Yann has won everything: world champion, winner of the Swiss Inline Cup, of the World Inline Cup, of the French Inline Cup, the "3 pistes", Gross Gerau, the World Games... you name it. In short, the best world skater in 2008/2009. 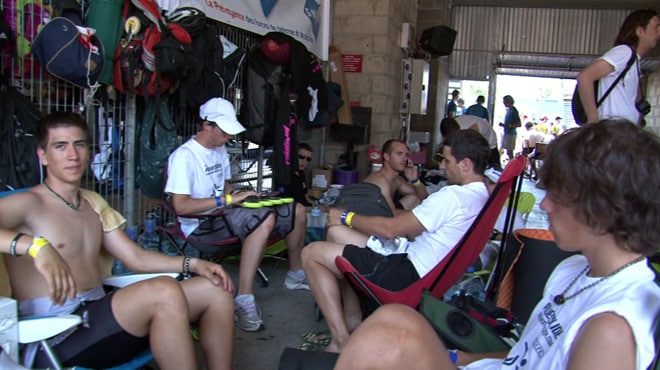 Le Mans is above all a team challenge. And the team Powerslide/Ligne Droite lined up is beyond a doubt the most solid ever engaged.
Among the high profiles, we also find a renowned german racer, namely Felix Rijhnen, a tall character easily standing more than 1,85m with a wild leg stretch/stroke and multiple podium positions in World Cup.
Top this off with frenchman Pascal Briand, multiple world champion, who also participated in the iceskating events at the Olympics.
Sprinkle with some Tristan Loy, a former member of the mythical Salomon team, international-level ice skater. And did we mention he holds the World Record for the 1-hour skating (36,450 km achieved in 2000 at Grenoble)?
Don't forget your Ewen Fernandez, in great shape this year with a nice second place in the World Cup at Rennes, who can record lap after lap like a ticking clock.
Beyond these famous names in the rollerskating circles, also add : Jore van der Bruge (Belgium), Ted Ooijevaar (Holland), Anthony Averty (France), Sven Mallazie (Belgium) and of course Kwinten Tas (Belgium), most of which regularly enter in Europe or World championships. 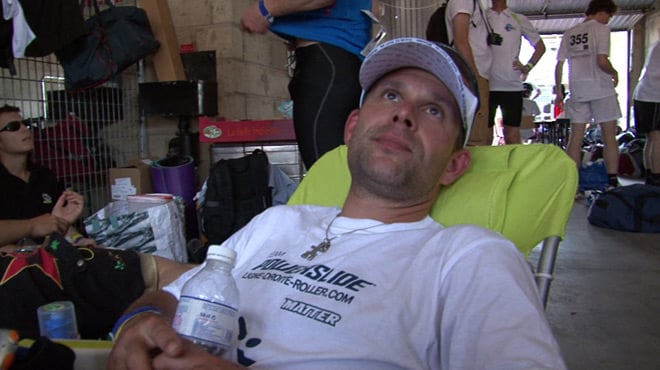 No less than 9 staff members helped around the Powerslide/Ligne Droite team during the "24 Heures 2010" : 2 cooks, a masseur / physiotherapist, 2 timekeepers, one manager, and more !

As some skaters had to be preserved for the France championships next week, Christophe Audoire, team manager, organized the watches as follows:
Ewen and Yann are to skate the most saturday before nightfall, so as to return fresh on the track the next day and then recover in time for the Track France Championships in Saint-Brieuc.
Those two racers will thus leave from 9pm on saturday, to return sunday 8 am.
Night will be covered by the old-timers like Pascal or Tristan.
As a matter of fact, Yann and Ewen are mandated to drop blasting laptimes. They should systematically record times below 6'30, so as to leave the competition way behind from the very beginning.
And they surely will fulfill the mission, clocking regularly below 6'15 to the lap.
They will therefore do one full hour just the two of them relaying each other before leaving for a night rest.
And they'll do the exact same thing again the next day, to widen the gap with the pursuit teams. 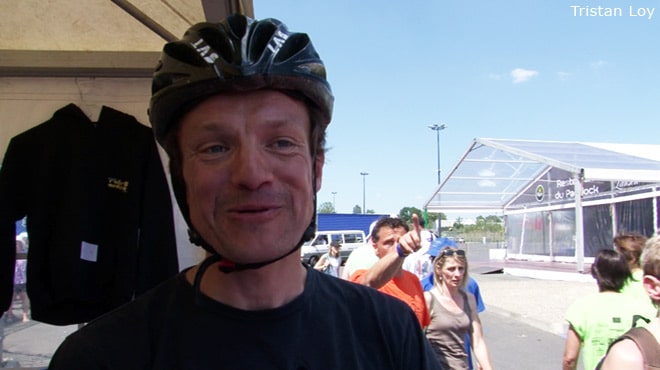 604 teams and solo skaters registered this year and are lined up on the endless pit straight. The image, strechted over 300m, blurs in the shimmering air on the overheated track. 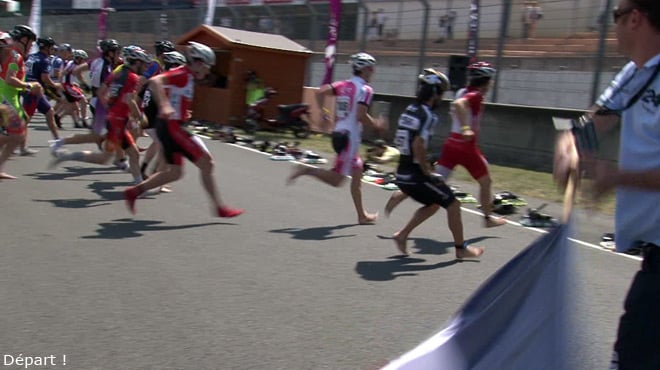 A desert-like mirage, where ground and sky mix up in a strange mirroring effect. The heat is overwhelming, beyond 33°C in the shade, with almost no air movement.
Countdown. 3..2..1, Yann Guyader rushes to his skates, he manages to put them on and take off within the 5 first skaters on the track, despite the extreme closefit of the moulded carbon shoes, absolutely unsuitable for this kind of exercise.
He takes a rushing start without even strapping them on, overtakes 3 fitness skaters within 10 meters. He is now alone ahead, taking on the Dunlop uphill slope.
The dense and colorful mass of skaters flows on the track for long minutes. The asphalt then clears up slowly, its flat quietness contrasting with the frenzy of the spectators massed up on the barriers and in the stands. All are scrutating the incoming end of the stands straight line, 300m further below. 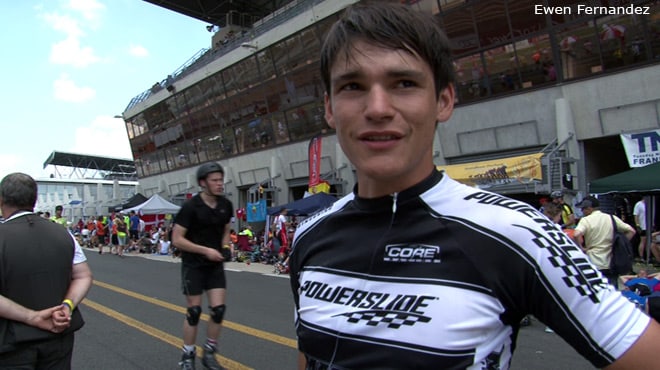 A racer finally appears in the shimmering distance, his silhouette surrounded by the motorbike headlights. There's no mistaking this low-rise position, characteristic of the french skater: yes, this is Yann Guyader, attaking solo the endless slightly uphill straight line, in front of a hysterical crowd !
The onlookers cheer his name, a moment to give you goosebumps. One then slowly considers the impressive acceleration he must have performed to ensure such a great gap with his competitors.
As his traits become distinguishable when he nears up, the followers have yet to show even the slightest tip of their frames in the last turn before the straight line. Absolutely boggling.
Yann crosses over the line when the pack of pursuers only starts engaging the last turn. He already registers a 45 seconds lead in less than one lap. To be sure, he completes his first lap in 6'45, including doning the skates and starting off.
The tone is set for 24 hours to come. The race is already done and over with, there will be no competition for the first place. Yann is already off for his second lap.
He will admit to us later, though, that the Dunlop slope did leave traces. Pfff, don't we feel better, he is still a human being, after all ! 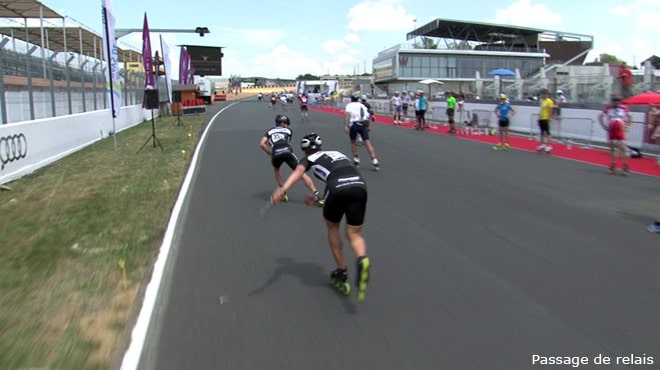 Yann will then relay with Ewen Fernandez. Then the other teammates will regularly register full-speed laps. To give you a taste of the laptimes of these fine gentlemen : Ewen is regularly lapping below 6'20. Pascal clocks in a 6'16 time. Yann is on record with a 5'58 lap (manual timing). Most of the other skaters in the team can regularly tick between 6'40 and 7'00. This is one homogenous team.
During the night, Tristan skates less strongly, but keeps registering laps like a machine.
At daybreak, Powerslide/Ligne Droite already boasts 6 laps advance on the CSR Team. Paris Hockey Club is currently in 3rd position.
When Yann and Ewen reappear on the track, the gap will widen again. The two skaters will register lap after lap and accelerate for one full hour. At race end, the team enjoys an advance of 13 laps over the second team and 18 over the third. 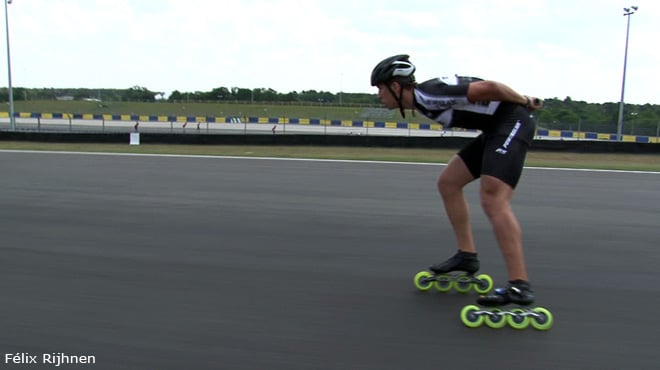 Official Lap Record in 6'01, record number of laps (208 times around the circuit), Powerslide was not out to do thing by half this year. The black and white team totals 866 km at an average speed of 36 km/h.
It is great to see international teams interested in such competitions. Maybe this will enhance the visibility of events like Le Mans. This race offers unrivaled mediatic exposure to sponsors. Let us hope that in time, other teams of commensurate aura will also join the competition.
Who knows, why not in an endurance World Cup ?

Yann Guyader's words on the race 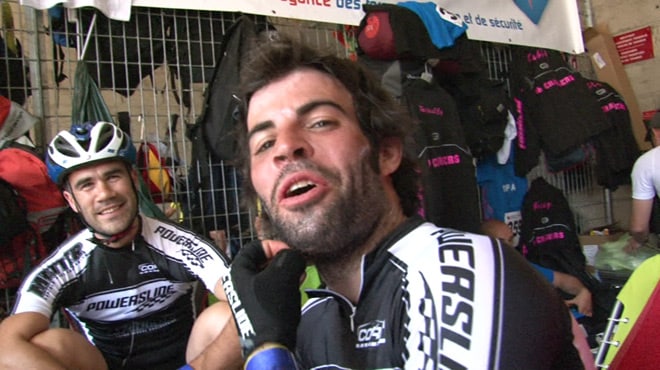 "I had only caught a glimpse of the race 4 years ago. This time, I was flabbergasted from the very start of the event.
Even during the opening parade, I realized the magnitude of what is happening here and its impact on the rollerskating world. I never felt this way except maybe in Berlin, the best rollerskating competition.
Waiting for the start was really cool : the speaker countdown, the adrenalin buildup with the full tribunes cheering... and then the start is given. Here, I had to choose between reason and madness. I opt for the second solution and take off with completely unfastened skates.
No matter, this allows me to take a decisive advantage. My first crossing of the line is memorable. The crowd cheers and I am alone on the straight line to enjoy it. The others are already way behind. Complete bliss, the end of this first lap !
Then things calm up a bit. I can now enjoy the athmosphere. This is what I enjoyed the most, more than the race itself, this heteroclit mixing of experienced and beginner skaters, sharing the same box with us. I shared moments with all sorts of people, some I knew before, some complete strangers. I can now say that rollerskating without the "24 heures" wouldn't be rollerskating in its most complete acception !
I appreciated the professionalism of the organization. Everything is smooth, everything feels secure and entices one to achieve the best performances, in the best conditions.
I rather disliked the heat which kept us from doing better times : 5'50 in cooler times is definitely achievable. I enjoyed at some times, even if it was uneasy, the traffic at the very beginning and the end of the racelaps. It's like driving a sportscar full speed on the public highway between Lyon and Marseille on a day of heavy traffic (just a metaphor!).
In a word, I now a fan. I loved the experience, racing as a team and supporting each other, and mostly bringing the best out of oneself over 24 hours, even though for us the effort is different and is more a succession of short and intense rushes than endurance proper.
So, I am happy with this participation and this new facet to my skills. I only regret the lack of recognition for all types of performances from the organization :
I would have liked that any broken record be recognized, the lap time record, the total number of laps, and this, in all categories. Even with no money involved, some achievements deserve better recognition. I am thinking specifically of the solo skaters.
With just a little more recognition and rewards, the picture will be complete, Mr Mogis !
It is quite close to perfect already !" 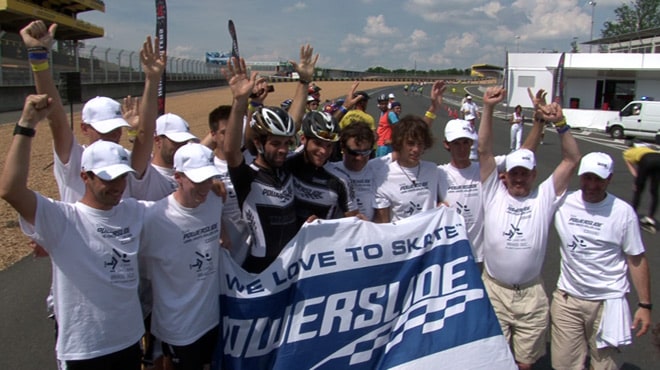