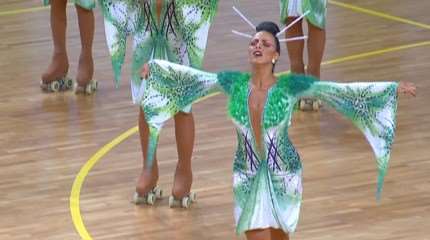 Main Results of the 2017 European Championship

Italy and Spain are the leaders in group skating with perfectly synchronized performances. Portugal also seized several victories, and some promising nations, like the Netherlands, are rising.

The Latin domination is real, as soon as the youngest categories. The winning Spanish group immersed the public in a troubling crime scene. Despite a fall in the last seconds, the collective gets the first place in front of Division.

Portugal won on the edge against Italy — the latter placing 3 teams in the Top-4! The Lusitanian quartet (1st) got less points but better spots against Magic Skate (2nd). The Juventude Pacense Club presented enigmatic double-sided characters, and original technical elements.

Quartet: The Latin Countries in the Lead

To the La La Land Sound tracks "Someone in the Crowd" and "Planetarium", the four Italian women of Celebrity won the audience over with their good mood, their dynamism, their smiles and colorful outfits! A breath of fresh air, hardly a few months after the release of the movie (late January!). The Italians finish just in front of the Portuguese men of The Project with "Are You Mambo?". The latter were a whisker away from the gold, with their choreography to Lou Bega's "Mambo Number 5".

This year, the Italians presented programs that were often based on the same themes or soundtracks. It was the case for the two winning groups in the Junior Precision category.
The French managed to take the fourth place behind the combined success of the Italians.

Only four teams took part in this category. Without surprise, Italy seized the whole Top-3, in front of Estonia. The pieces of music of the American production music company Two Steps From Hell were used a lot this year, with five tracks at least during the championship! The Sincro Roller Calderara ASD chose the piece "Flameheart" for their choreography and to warm up the atmosphere. The skaters then discreetly changed outfits and finished their show to a version of "Ave Maria", as a symbol of their "redemption".

Division offered us one of the most memorable performances of those European Championships with their "Love for a Stranger" choreography, filled with grace and elegance, inspired from Giacomo Puccini's opera, Madame Butterfly. The outfits, designed with a care for details, made a strong impression as soon as the group's entrance on the competition area. The second place went to New Age with "Season of Life". The theme of time passing by and death were present in all the performances.

Large Groups Show: C.P.A. Olot Living Up to Their Reputation

The performance of C.P.A. Olot was highly anticipated and didn't deceive the public nor the judges. The skaters immersed us in a dark atmosphere where prisoners were trying to escape from their jailers. The soundtrack shifted from suspenseful hip-hop to rebellious metal (Metallica, please!). A fascinating, captivating, oppressive choreography performed with pin-point precision! The best is yet to watch the video...

Diamante made us time travel to the roaring twenties of Broadway with "The Producer". A well-deserved second place, in front of the Royal Eagles with "I've Lost My Head", who finished third.

Note: Spain and Italy both got 3 spots in the Top-6! The Netherlands are ramping up and reached the seventh place, just in front of France.

Visit our page on the 2017 European Championships of Group Skating in Mouilleron-le-Captif, France

About the Author: Aurélien