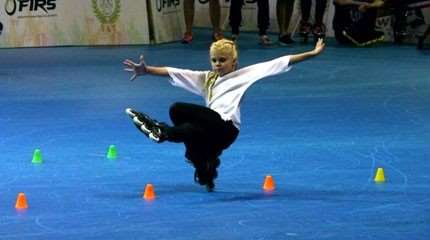 The Senior Men open the competition as soon as early morning. A good dozen of skaters had been divided into two groups, only the two Top-3 of which would qualify for the afternoon final phase.

In the first group, 2015 World vice-champion Chinese Ye Hao Qin finishes on top of the ranking, in front of Thai Sawangsri Kanchanok (finalist at the 2015 WFSC Battle) and Spanish Nelson Carlos.

The morning ended with the competition of Pair Slalom. A small dozen of pairs took part in this open competition of synchronized slalom skating. The favorite and much awaited pairs were the Koreans, the Italians and the Polish. In the end, it's the Italian pair, made of Valerio Degli Agostini & Lorenzo Guslandi, who got the gold with a very technical and synchronized run.

Check out the end of their run in the live video posted on the Online-Skating Facebook Page.

The rest of the Top-3 is completed by the Chinese Ye Haoqin & Zhang Hao (2nd), and the Japanese brothers Masayoshi & Taiki Shibagaki (3rd). 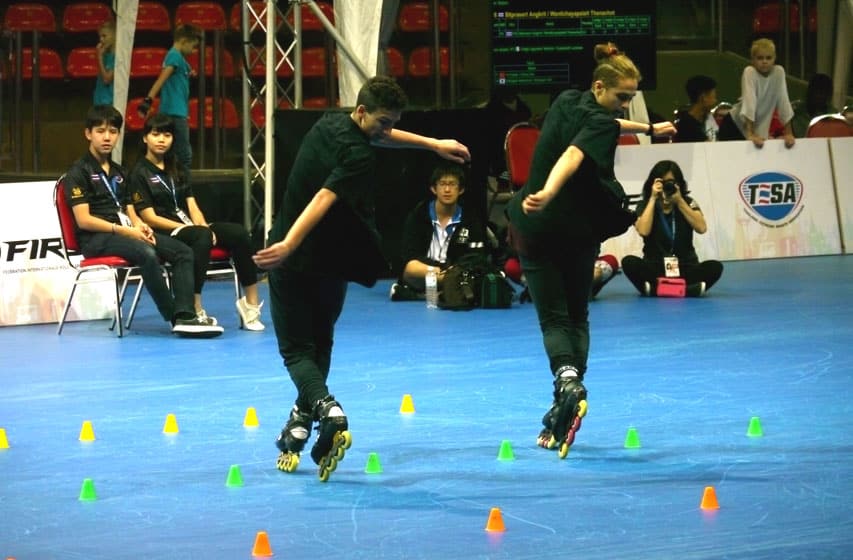 Last year, the Top-3 was made of Chinese Feng Hui (1st), Russian Sofia Bogdanova (2nd) and Chinese Guan Yu Xiang (3rd).
This year, those were still the two expected leading nations, with mayby a couple possible outsiders, such as French Lily Granjon, and Chiu Yin Hsuan from Chinese Taipei, or even Thailand.

In the end, it was a remach between Feng Hui and Sofia Bogdanova. The marks given by the judges were extremely close, both competitors having put on a great show.
The title finally goes to Russian Sofia Bogdanova, who wins the junior women's competition, and the world title for the first time:a powerful rise for the Russian, who went from 3rd in 2014, 2nd in 2015, to 1st today!

Chinese Feng Hui, who had won the title 5 years in a row, has to make do with silver. She didn't hide her deception. Behind her, two other Chinese, Bao Yi Fan and Liu Jia Xin, finish respectively 3rd and 4th.

In 2015, Chinese Zhang Hao pulled off a hat trick, winning the competitions of Classic, Pair and Speed Slalom in front of Italian Valerio Agostini and Lai Hsu-Chieh from Chinese Taipei.

Since then, the Ialian has switched to the senior category but still has serious junior contenders such as Alessandro Lissoni and Lorenzo Degli Agostini. As for Russia, Korea and Chinese Taipei, they are also amongst the favorites of this category.
In the end, Chinese Zhang Hao irrevocably keeps the junior men's world title, with his run a cut above the rest, full of self-confidence, speed and technique.

Behind him, the Top-3 is completed by other Asian countries, with Chinese Li Wenzhuo taking second place, and Lai Hsu Chieh from Chinese Taipei, reiterating his 3rd place of last year.

Let's mention that last year's champion, Chinese Su Fei Qian, being absent, this was somehow opening the way to her main rival, Russian Daria Kuznetsova, who had to make do with silver last year. Ukrainian Maryna Boiko got the bronze in 2015, and she remains a serious contender to the title.

This year, several other Europeans are in the running for the title, including other Russians, Polish Klaudia Hatmanis, and French Zoé Granjon. China presents two qualified skaters, but both outside of the Top-10.
And surprise did come from China: Meng Yun, not much used to podiums so far, manages such a clean and technical run that she is propelled to the top of the ranking, getting the gold to everyone's surprise, including hers!
Having presented her run amongst the first competitors of the category, she remained first until the end, and couldn't hold back tears of joy at the announcement of the results. 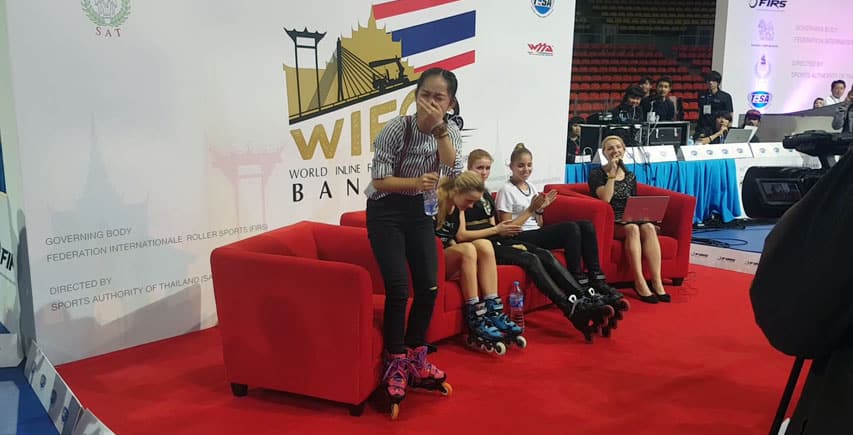 Check out the results announcement broadcasted live on the Online-Skating Facebook Page.

A great revenge on women's Classic for China, after the deception of the junior women's category.

Finishing 2nd, is Russian Daria Kuznetsova, who couldn't land all her tricks and was penalized by kicked-off cones, which cost her the title.
Ranked 3rd, is Polish Klaudia Hartmanis, with a clean and varied performance. 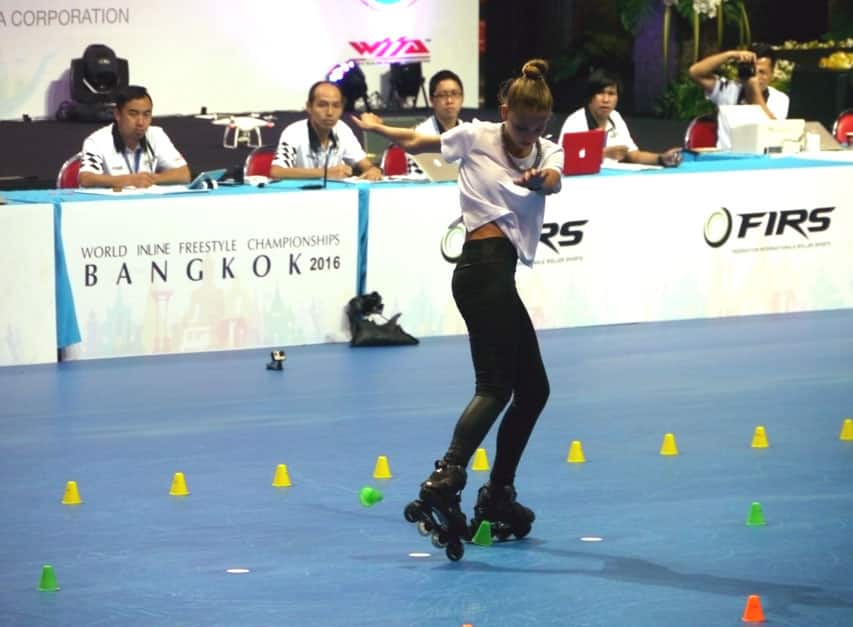 The Timchenko brothers had seized the podium last year in this category: Serguei got two world titles and his bigger brother, Alexander, got the bronze... with Chinese Ye Hao Qin in-between.

Behind those 3 leaders of the discipline, once again Russians, Chinese, Italians, French and Polish were outsiders to be watched for, always able to create a stir.

Chinese Ye Hao Qin runs in the first half on the finals and get provisory first place. Competitors run one after the other, and the Chinese holds on to first place until the last competitor's turn: Russian Serguei Timchenko. 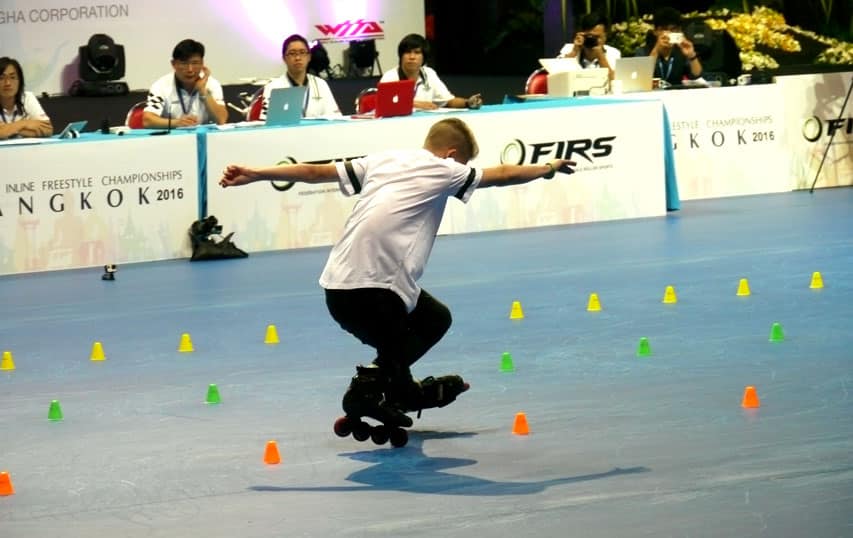 The latter doesn't give in under pressure and does a great performance, getting once more the world title. Chinese Ye Hao Qin finishes second, bettering his ranking of last year by one spot! Getting 3rd place, Serguei's brother Alexandre Timchenko, keeps the bronze with a very successful run.

The Classic competitions of the day finish with a China/Russia tie match: 2 titles to 2. Let's however note the increased presence of Asian skaters in most Top-3s.

Sunday will be dedicated to Battle Freestyle Slalom, a promising day full of suspense ahead, which will enable the disappointed skaters of the day to get revenge on their opponents.

Visit our page of the c2016 World Championships of Freestyle Skating in Bangkok, Thailand