Make Way to the ShowPiece Event of the Worlds: Battle Freestyle!

This year, the 4 skaters reaching the Final Round are favorite Russian Sofia Bogdanova (the brand-new 2016 Classic World Champion), with her team mate Smirnova Anna, and Chinese Liu Jia Xin (4th in Classic) and Thai Chinupun Nichakan.

For the Last Trick, Sofia Bogdanova's line, exploiting the allotted 30-sec to the max, stands out. Check it out HERE.

At the results announcement, just like in the Classic event, China springs the surprise with Liu Jia Xin, just as little used to podiums as her team mate yesterday, who gets the gold for her country! China have so many competitors up their sleeves that they knew how to impose themselves again, Despite Feng Hui's absence.

Behind her, Russian Sofia Bogdanova gets 2nd place for the 2nd year in a row in the Battle Competition.
Her team mate, Anna Smirnova, completes the Top-3, finishing in front of the Thai who gets a well-deserved World 4th place. 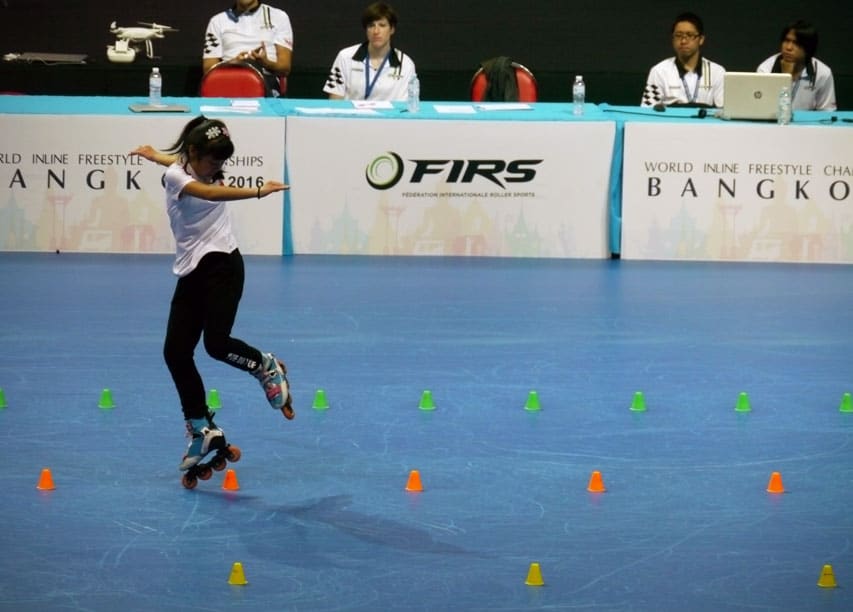 During the previous edition, Chinese Zhang Hao won the title for the second year in a row, in front of Italian Valerio Degli Agostini, French Nathan Menard and Japanese Shibagaki Masayoshi. This year, there are no less than 9 countries taking part in the final rounds, which promises to make the competition very open!

3 Chinese make it through to the Final: Zhang Hao (brand-new 2016 Classic World Champion), with Li Wenzhuo and Gu Kunqi. The 4th skater to take part in the Final Round is Italian Lorenzo Degli Agostini.
Without surprise, Zhang Hao wins his 3rd consecutive world title, thanks to his execution speed! Behind him, the rest of the Top-3 is completed by China, with Gu Kunqi and Li WenZhuo. Italian Lorenzo Degli Agostino finishes 4th.

What will be remembered of those Junior categories is the undisputed Chinese domination! 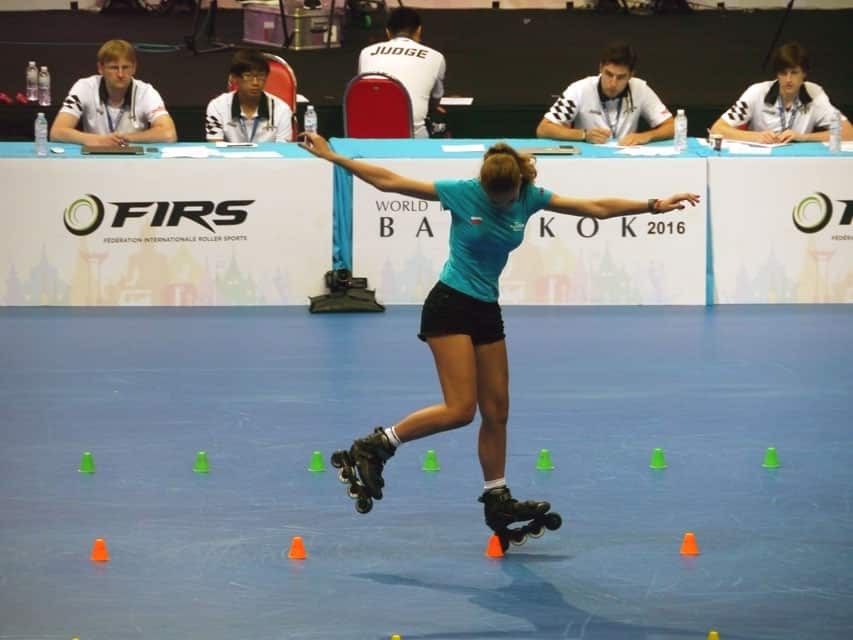 Last year, Russian Daria Kuznetsova won the women's senior battle for the 3rd time in a row. As for Chinese Su Fei Qian, she finished 2nd for the 2nd time in a row, the Russia/China match having been very tight once more. Russian Ksenia Dubinchik and Spanish Alba Garcia Patiño finished respectively 3rd and 4th.

This year, Su Fei Qian is not here, and not a single Chinese qualifies for the Final Round. The two Russians, Daria Kuznetsova and Ksenia Dubinchik, meet in Final with French Zoé Granjon, and Polish Klaudia Hartmanis.

Russian Daria Kuznetsova keeps the title in outdoing her opponents. Check out her Last Trick HERE.
Russia wins a double, with Daria's team mate Ksenia Dubinchik getting the silver (and improving her result of last year by one spot).
Behind, Polish Klaudia Hartmanis gets the bronze, leaving French Zoé Granjon at the foot of the podium. 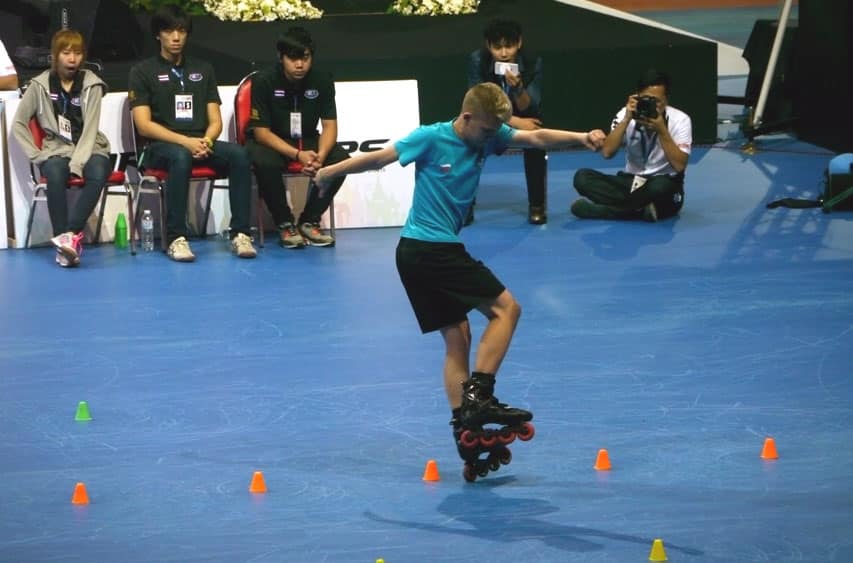 Senior Men's Battle – Russia Rubs It In With the Timchenko Brothers!

Last year, Russian Serguei Timchenko had won his 2nd World Title in front of his brother Alexandre. Thai Kanchanok Sawangsri got a great 3rd place. This year, skating at home, the latter took it to heart to reach the finals again. The last spot of the Final was taken by Italian Lorenzo Guslandi.

Today, both Timcheko brothers are present. Chinese Ye Hao Qin is ready to do everything in his power to end the siblings' domination. The 4th Final skater is Italian, Valerio Degli Agostini, who qualifies at the very last moment. The usual China/Russia match will then also happen in the very last round of this last slalom event of the 2016 Worlds!

Once more, The Timchenko brothers dominate the competition. Serguei gets his 3rd consecutive title, in front of his brother Alexandre. Chinese Ye Hao Qin, who didn't prove unworthy at all, has to make do with 3rd place, in front of Italian Valerio Degli Agostini (4th).

Russia finishes the 3rd day in a flourish, knocking down their opponents in the senior categories.

Monday: Dedicated to the Freestyle Slides and Freejump events, that will end the 10th Worlds of Freestyle Skating. 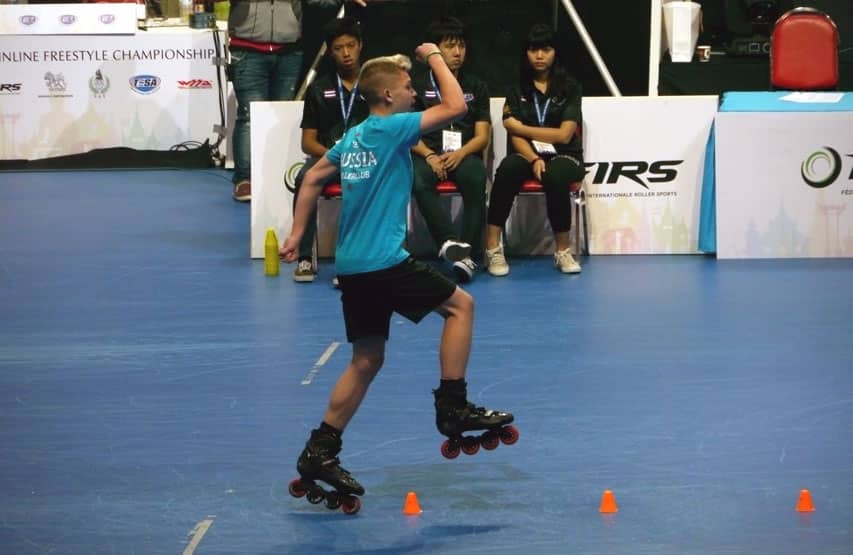 Visit our page of the 2016 World Championships of Freestyle Skating in Bangkok, Thailand