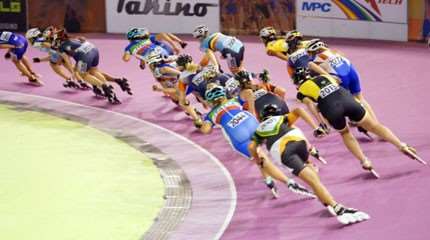 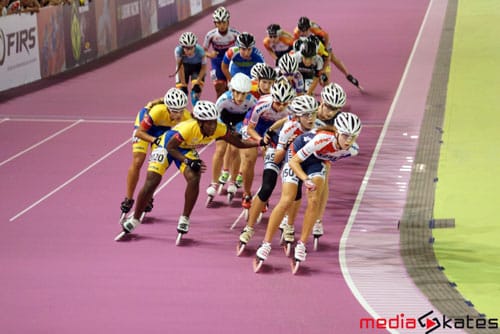 After a few laps, more than the third of the rear pack skaters is caught in a collective fall. So that the eliminations are momentarily suspended. Only one skater will take a little longer to get back up. At the front, a group of 4 skaters, including 2 local skaters and 1 Colombian, gleans points. The Koreans take the lead in turn and get points.

Chang Yu-Hsin (TPE) breaks away, with Luz Karime Garzon (COL) in her stream, widening the gap with the pack. After a few laps on her heels, Colombian Luz Karime Garzon goes solo and gets a 1-lap lead on the pack. She finishes the race with a total of 32 points. Chang Yu-Hsin (12 points - TPE) crosses the finish line a few seconds behind. Yewoon Choi (9 points - KOR) completes the podium, in front of her team mate Goeun Jeong (3 points - KOR).

The race is tight, with the French and the Colombians occupying the outposts. Colombian Fabian Valencia (COL) and Italian Daniel Niero (COL) get most of the points while eliminations follow one another at the back of the pack. Attacks regularly happen, but without major consequences on the ranking. 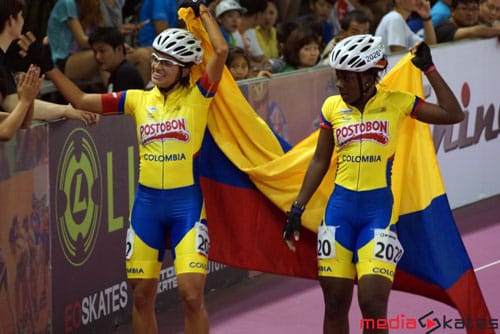 Daniel Niero (14 points - ITA) knew when to seize the opportunity and get in the stream of each skater breaking away. He finishes first in front of Fabian Valencia (11 points - COL) and Jeong Bye (7 points - KOR). Dutch Chris Huizinga (6 points - NED), often in the first places of the pack, finishes at the foot of the podium. French Quentin Giraudeau, the 2014 world champion, finishes 5th with a total of 5 points.

No skater really made the difference in the Senior Women's, the pack remaining together the whole race. The first places were very coveted and many skaters took them in turn, USA, South Korea, Chinese Taipei, Colombia, France. South Korea did an impressive job in locking the race and controlling the front of the pack, with Argentina in her stream.

In the last laps, only two Colombians, two Koreans, one Argentinean and one skater from Chinese Taipei remain and fight to stay in the running. The latter will be eliminated a few laps from the arrival.

Colombia, Fabriana Arias wins the final sprint, in front of Koreans Sook Woo and Yu Garam. Argentinian Maira Arias sees the doors closing in front of her in the last straight line, getting 4th place.

The tight pack of senior men goes for 75 laps. French Alexis Contin and Ewen Fernandez quickly take the lead, followed by Italians. South Korea also takes part in the fight. The front positions are locked, and eliminations thin down the pack from the back. The South Koreans, French, Italians and Colombians don't let anybody in.

In the last laps, with only a small dozen skaters remaining, Italy gets the lead. Colombia tries to pass on the outside together with Venezuela, but without success. The French seize the lead back. Italy loses one skater on the second-to-last elimination. The skater from Chinese Taipei manages to join the battle while the French launch the sprint. Ewen Fernandez protects Alexis Contin, swift as an arrow in the last lap. Ewen controls the race and gets the 2nd place. A nice strategic race from the French!

Visit our page of the event

Full results of the point and elimination races

Photos of the races of the first day on mediaskates.com