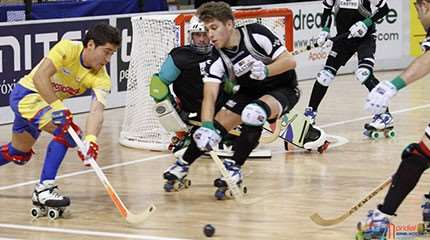 Before the day off 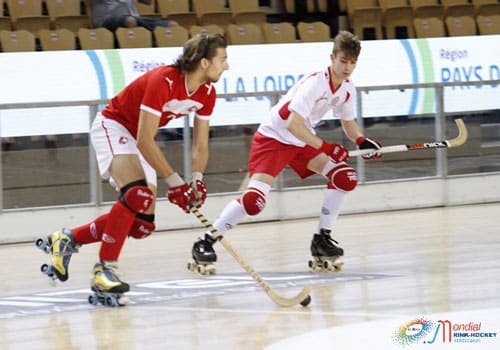 The Swiss surprise the Britons from the start, with Jimenez opening the score after one minute. The game is unbalanced but the Swiss get the clearest opportunities. They score twice, with a first goal by Imhoff at the 8th minute, and by a penalty shot converted by Kissling at the 9th minute.

The Brits are looking for a flaw but the opposite defence remains sealed around their goalie. At the end of the first period, Waddingham manages to reduce the score for Great Britain.

Score at the break: 3 - 1 for Switzerland

Back from the break, Schaffer scores soon for Switzerland. Two other goals will be scored at 30' and 32', a Swiss penalty shot converted by Kissling and a shot around the cage by Vanina.
The Britons try to fight back but can't overrun the Swiss. Jimenez bumps up the bill, bringing the final score to 6-1 for Switzerland.

The Colombians try to impose their pace and their technical quality but the South African defence remains well organized around their goalie. They even open the score at 10' with Figuiedo. The Colombians push and try to catch up on the score, the game gets harder, and penalties shower down on both sides. 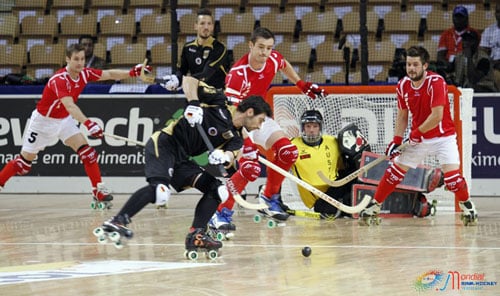 25 seconds before the break, Ramirez scores on a penalty shot, enabling Colombia to tie.

Back from the break, Ramirez gives the advantage to Colombia. the South African players lack precision and don't manage to catch up on the score. 6 minutes from the end, Giraldo scores and gives a more comfortable lead to Colombia. From then on, the Colombians control the end of the game. Toro scores at the last second and Colombia wins 4-1.

The beginning of the game is relatively balanced. Parreira opens the score for Germany at the 3rd minute. From then on, the Germans keep the advantage over the Austrians who seem to lack inspiration.
The German team scores twice in a row, at 9' and 10', with Hages and Karschau.
At the end of the first period, the Austrians manage to reduce the score gap on a direct foul shot converted by Parfant.

Score at the break: 3-1 for Germany 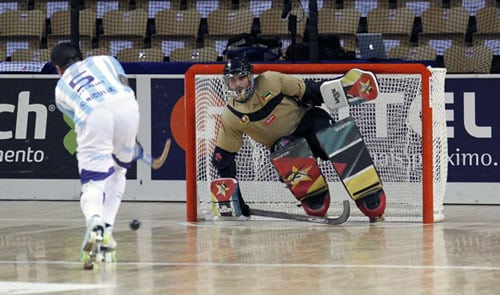 As soon as the beginning of the second period, Germany widens the gap. Austria catches up with a goal by Bruner, but Germany fights back scoring twice in a row again, at 23' and 26'.

Surprising Mozambique! The game promises to be enjoyable as soon as the first minutes, the two teams show great intentions. Quick game and determination are on the court. The Mozambicans surprise and open the score. In the first 10 minutes, 4 goals are scored, 3 on the Argentinean side by Nicolia, and 1 by Pinto for Mozambique. Then Ordonez bumps up the bill at 11' and increases the lead of Argentina. Exchanges balance and at the very end of the period, Saraiva offers a second goal to Mozambique, who can hope a little more.

Score at the break: 4-3 for Argentina

The second period starts at a very fast pace and actions follow one another. On a direct foul shot at 23', Araujo ties for Mozambique. Argentina quickens the pace of the game, they want to force the decision and touch the post several times. 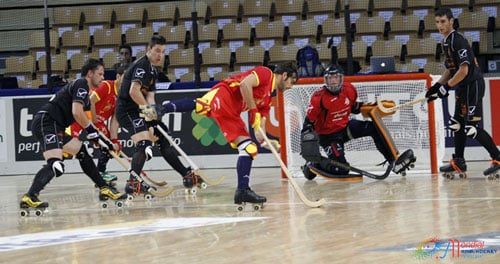 After a wonderful action, Ordonez finally scores for Argentina. The game goes on and remains very enjoyable, both teams being ready to score at any moment.

The score remains in favour of Argentina, 5-4.

The Spanish show their technical quality and their teamwork speed right away. They score twice in the first 5 minutes, by Gual and Androher.
At 11', Androher adds another goal, bringing the score to 3-0. Lamas closes the score of the first period on a penalty shot.

Italy does a very good game start, scoring 4 goals against Chile, including 3 in the first period. The Italians pass the ball, make only little penalties and have a good game flow. Their scorers are Ambrosio and Tamaranni. The Chilean regularly go for counter attacks but without success.

But it's without taking into account the determination of the South Americans in second period. They manage to catch up on the 4 goals, 3 minutes before the end, thanks to Osorio, Castro, Fernandez and Carmona. Chile misses two direct foul shots. The last Italian goal is scored 2 minutes before the end by Ambrosio, on a counter attack.

Portugal is a cut above Brazil, in terms of technique, teamwork and speed. Brazil counts 3 defeats and logically end up last of Group C. They will play the classification games. As for Portugal and Germany, they qualify for the quarter finals. 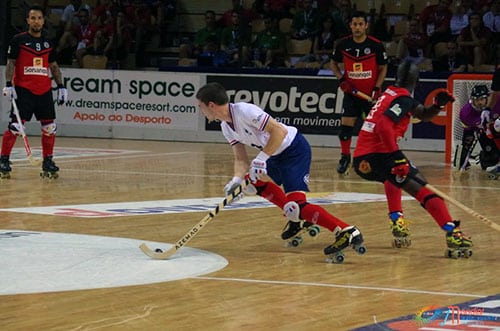 The game of the day! After standing up to Spain, Angola impressed the other teams and the French will need all their determination to reach the next round.

Things don't start well for the French who let a goal in after a few minutes. The Angolans are quick and, above all, physical. Their harsh game puts the French defence at risk. France struggles the whole first period. The Angolans physically dominate the French.

Back from the break, the French implement a more determined game. Florent David scores the first French goal. All the Vendespace stands up to celebrate the opening of the French score. 2'40'' from the end, the French take the advantage on the Angolans in front of 3.700 supporters. The last seconds were the longest ever. The Angolans are still as committed, the French get the first blue card of the game, but Angola fails to convert it. Soon after, France gets a compensation that seals the results for good, with a goal by Carlo di Benedetto. The French are in quarter finals!

The quarter finals game of the French will take place on Thursday evening. Let's hope that the live streaming will work!