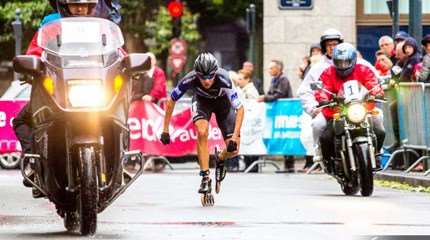 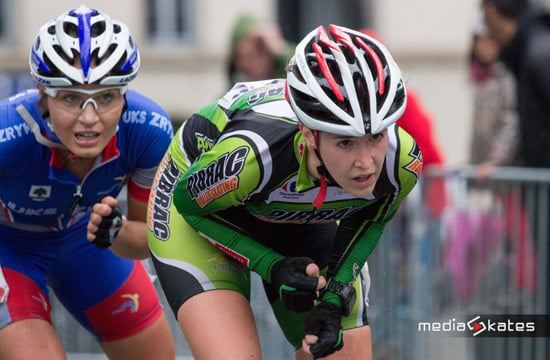 The rain and the wind didn't spare the competition in Rennes...

Semi-Marathon: The U15 don't always win

There are a little less than 100 skaters at the start. The weather conditions are not favorable. You have to be careful with the paved corners and the pedestrian crossings, typical of the Rennes route.

In the women's, the younger ones rule the roost, one by one they reach the finish line, Maureen Hayes (U20 — ADEL Patinage) first, then her club team mate Laurine Vannier (U15) and two minutes later Camille Court (U20 — Roller Créchois). The first senior woman, Bénédicte Le Pennec (Roller Skating Hockey Caen) finishes at the foot of the podium.

Men and women take the start at the same time as the Semi-Marathon. Let's remind that it is a qualifying race for the master worlds of marathon that will take place in Dijon, France, in mid-June. All the candidates to the French Team are present.

The Women's race has 9 skaters at the start. The local Gaëlle Duplenne (REC Roller) makes the difference in breaking away solo. She finishes with almost a 4-minute lead on Claudie Duval (CS Brétigny), also in a breakaway. 40 seconds behind, Stéphanie Lavergne gets the Bronze on the razor's edge, in a sprint against Pascale Tendron (Roller Skating Hockey Caen).

The Men's race starts with a good pace and the leading pack grows thinner as laps go by. In the final sprint, there are only a dozen pretenders to victory left. Sylvain Cabotin (ROC Steoruellan) imposes himself in front of Nicolas Laval (Haut-Rhône N Roller) and Frédéric Techer (La Reunion — Roller Skate Dionysien).

Only 10 women take the start of the international marathon. Amongst the forces involved, several of them are used to international marathons, such as the Polish Alexsandra Goss, the French Clémence Halibut (2 APN Avon), Sabrina Gaudesaboos and Marie Poidevin. The skaters of the Pôle France are also there. After 9 laps, Aleksandra Goss and Juliette Pouydebat (Pibrac RS) break away and widen the gap, lap after lap. the French launches an attack in the last corner and wins at the sprint in front of the Polish. Clémence Halbout completes the Top-3, settling the 3rd-place sprint 3 minutes later.

'During the first half of the race, we were 4-5 to regularly relay each other and Marie Poidevin launched a few attacks. I was feeling I was in on it. When it started raining, I took the front and started speeding up the pace a little. We quickly found ourselves just the two of us, with Aleksandra Goss. We got on well together in trying to keep a fast pace not to lose the lead. In the last lap, I wanted to launch the sprint from the front and I got it into my head that I would do it at the stretch before the arrival. And I got on a sprint at that moment and until the finish line.' 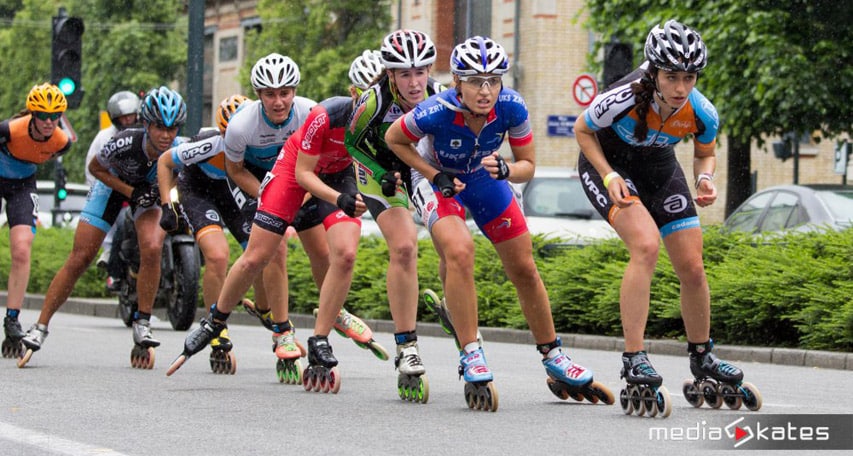 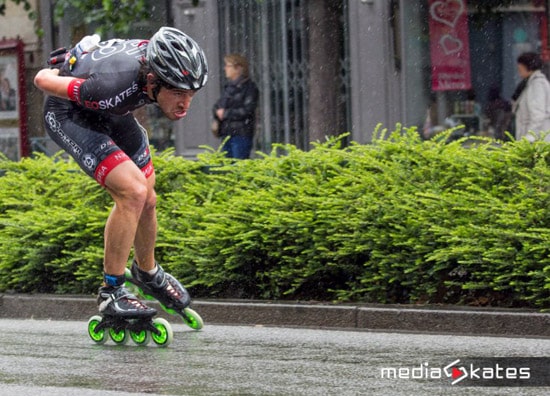 While the weather seems to get a little better for the international marathon, about 60 skaters take the start. The main protagonists don't take much risk during the first laps. After 6 laps, the leading group is made of about 20 skaters. Peter Michael and Nolan Beddiaf take off... A group of skaters is on their heels. Rain crashes the party. Falls follow one another and Bart Swings (Powerslide) skates towards the front, together with Ewen Fernandez (EO Skates). While Peter Michael gives up, Bart Swings goes on a solo breakaway. Behind him, Ewan Fernandez (EO Skates) and Martin Ferrié (U17 — Pôle France) fall but manage to catch up and fight in the sprint to get the silver and bronze.

'It was a very tactical race at first, with a lot of mutual observation from the leaders. I made the most of it to break away with Peter Michael (New-Zealand), just before the rain started and twisted the end of the race, a little extra spice that wasn't needed! Falls kept on reshuffling the cards until the arrival... Luck wasn't on my side. I fell in the last lap and ranked 4th...'

The official website of the French Cup of Roller Marathons