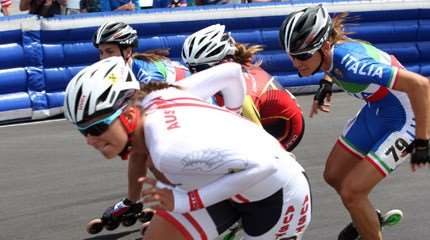 Here we are, it is the last competition on the road circuit before the marathons! The weather conditions of the previous day delayed the relays until Sunday morning. All the skaters had to wake up early to complete the schedule.

Veronica Luciani, Giorgia Bormida, Beatrice Fausti and Laura Lorenzato made the difference for Italy against the German and Dutch skaters. The French, victim of a fall by Chloé Geoffroy coudn't finish the race. The Spanish had to withdraw too.

The French quartet made of Bastien Lhomme, Martin Ferrié, Valentin Thiebault and Flavien Foucher imposed themselves against Germany and Hungary. The Italians, used to battling with the French during those Championships, have to make do with the 4th place.

Junior A Women: Belgium settles everything

Belgium let the gunpowder do the talking in the last hectometers with Stien Vanhoutte, Nymphe Keuleers and Ellen Van de Catsye. The three skaters outdistanced the Germans by 1 second and the Dutch by 5. France was disqualified and Charlotte Frouin fell. We wish her a quick recovery.

Daniel Niero Marco De Flaviis, Duccio Marsili and Roberto Fiorito got the title for Italy against France and the Netherlands. Germany had to make do with the 4th place. We couldn't watch the race, our apologies for the lack of details.

The pace of the race increased little by little. There were Italy, Germany the Netherlands, Portugal, France and Belgium.
10 laps from the arrival, all the skaters were gathered in a pack, everyone trying to place themselves to pass the relay in the best conditions. At 6 laps, France was leading with Italy in its stream and Belgium. Italy passed in front at 5 laps. France took the lead back at 4 laps.
At 2 laps, France attacked. Italy got back in front at the beginning of the last lap and won't be caught back up on. Final ranking: Italy, France, Portugal.

Full Results of the relays on road