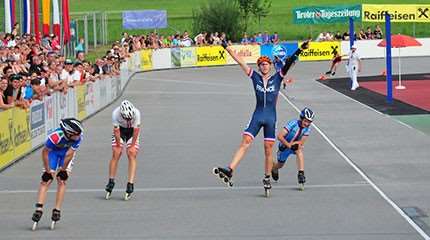 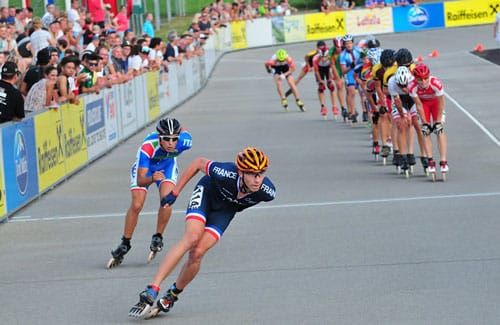 The Austrian Vanessa Bittner performs at home and makes the most of this advantage as soon as the first race, with a time of 25.973. Her knowledge of the track probably helped her make the difference against the formidable Italian, Erika Zanetti, who crossed the finish line hardly 5 hundredths behind, in 26.036. The versatile Sandrine Tas (BEL) completes the Top-3.

The race was closely fought in the men's, and it's finally the young German prodigy Simon 'Boom Boom' Albrecht who wins it in 23.460. The European record holder outruns the French Darren De Souza (23.553). The 3rd place goes to the Dutch ice and inline skater Ronald Mulder (23.704). Elton de Souza (FRA) remains at the foot of the podium in 23.854.

Note: the Top-4 men made times under 24 secs and under the word record by Andres Felipe Munoz (23.896). The oddities of international rules...

Italy strikes again with Giorgia Bromide (26.821) who imposes herself in front of the German Elisabeth Baier (27.032) and the French Chloé Geoffroy (27.126). There are only 2 tenths of difference between the first three, proof of how homogeneous the level is in this category. 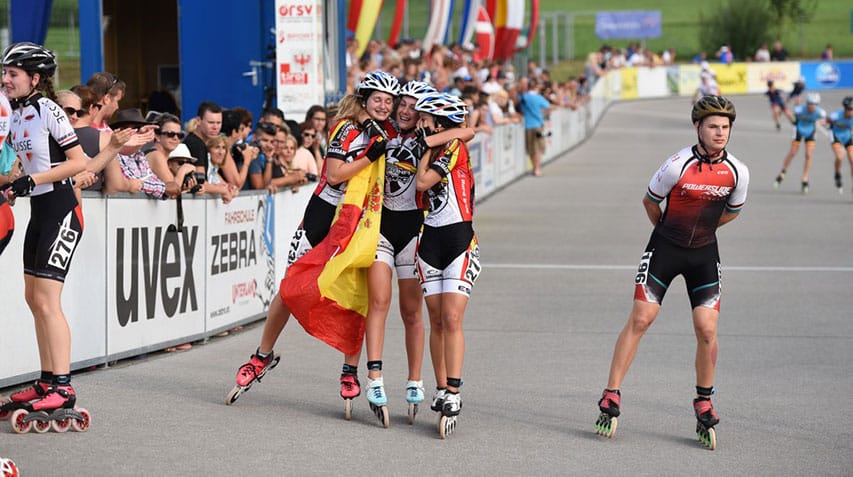 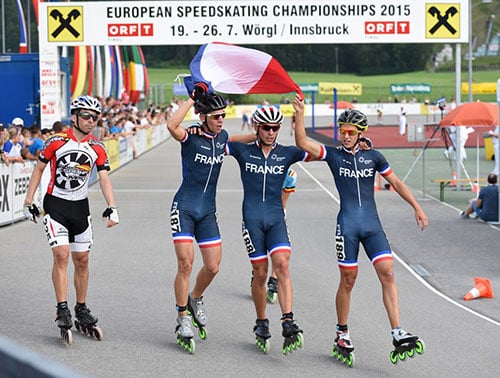 After the sprints, let's make way for the long-distance races!

The French hat trick on the 5000 m point race of the Junior B category is probably the most striking moment of the first day of competition: Martin Ferrié (10 pts), Flavien Foucher (7 pts) and Bastien Lhomme (4 pts) perfectly negociated their team race, leaving but little opportunities to their opponents. The Italian Daniele Di Stefano (4 pts) remains at the foot of the podium.

The fight was far tougher in the Junior B Women's where the Spanish Ana Humanes finished to a tie on points (5 pts) with the Italian Veronica Luciani. The French Myriam Talloussi (3 pts) completes the Top-3 in front of the German Larissa Gaiser (3 pts). Nora Le Guennec (FRA - pts) finishes 5th, with a tie on points with 3 other competitors.

Thimothy Loubineaud had the honor of opening the French title list. The French imposed himself with 20 points in front of the formidable Italian Daniel Niero (14 pts). Another French completes the podium: Quentin Giraudeau (8 pts), the 2014 double world champion in Rosario, Argentina.

Bart Swings (BEL - 16 pts) proved once more his mastering of the race against the none the less experimented Alexis Contin (FRA - 13 pts). The two men fought at the top for the first place. Livio Wenger (SUI - 6 pts), the Powerslide team mate of Bart Swings, completes the Top-3 in front of the second French skater, Ewen Fernandez (5 pts). The 5th place goes to the olympic champion on ice Jan Blokhuijsen (NED - 4 pts). Nolan Beddiaf finishes 6th with 3 points.

Italy can always count on Francesca Lollobrigida! She wins the race with 24 points and a lot of ease in front of two impressive opponents, both multiple European champions: Sandrine Tas (BEL - 11 pts) and Manon Kamminga (NED - 11 pts). The French Clémence Halbout (5 pts), finishes at the foot of the podium.

The medal ranking at the end of the two first races

Italy makes a great way in with 11 medals, including 3 gold and 6 silver.

France took a bit more time to open the scores but is hot on the heels of the Squadra Azzurra as for the number of medals, especially with the Junior B Men's hat trick.

Belgium, with 4 medals including 2 gold, can count on two big names: Bart Swings and Sandrine Tas.

Germany, Spain, Austria and the Netherlands all won 1 gold medal. After one day of competition, everything is still possible! 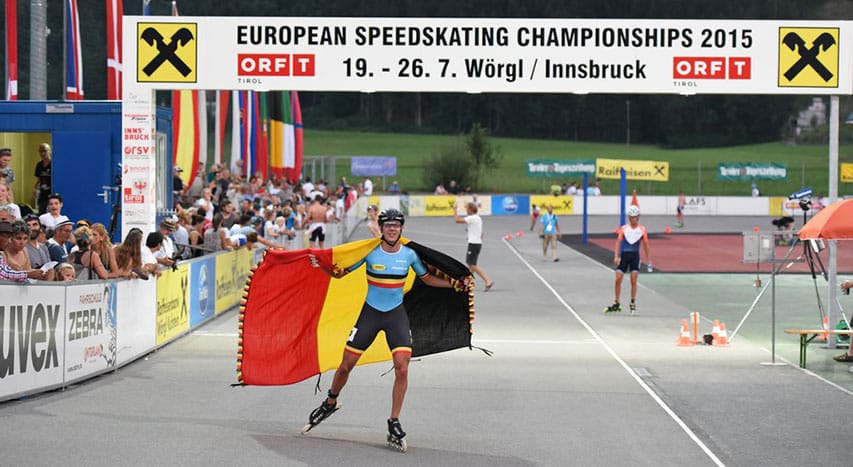 Results of the 300 m against the clock

Results of the point and elimination races