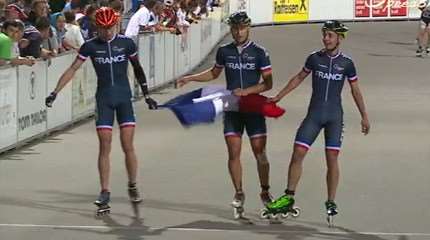 Junior B Women: Italy misses the hat trick by a whisker! 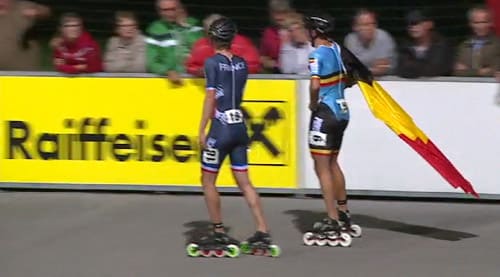 The rain was somewhat disruptive for the schedule of the races. The final of the Junior B Women's category starts at 21:15. 3 Italian skaters and 2 Dutch skaters are lined up on the start line. The 3 Italians take the lead right away. The Dutch Maya de Jong catches up and takes the front after having tried to enter the group without success. Italy gets the lead back in the last 300 m with Béatrice Fauti, Giorgia Bromide and Veronica Luciani. One may have believed in a hat trick but the German Ronja Binus goes for a hawk and gets the bronze hardly a few centimeters behind Béatrice Fauti and Giorgia Bromide.

Junior B Men: A collective race for France

Junior A Women: The observation race

Italy takes the reins with Alessandra Franco and Giulia Bonechi. The two skaters wait for each other. The competitors observe one another for two laps. The Italians control the race and keep an eye on the attacks from the back. The Spanish Gutierrez takes the inside full speed and gets the lead, with the Belgian Stien Vanhoutte on her heels. The Italian Giulia Bonechi powerfully catches up and takes the first place in front of Itziar Gutierrez (ESP) and Josie Hofmann (GER).

Junior A Men: The hat trick of the French

Again, 3 French skaters are lined up at the start: Matthieu Gilbert, Quentin Giraudeau and Timothy Loubineaud. The Netherlands don't give the other skaters time to fall asleep. Chris Huizinga takes the lead as soon as the start of the race, with 2 French and 1 Italian in his stream. The French try to gather together and close the door to the Italians. Hazing doesn't seem to be willing to leave his place but he gets passed at the end of the first lap. Quentin Giraudeau crosses the line, followed by the 2 other French, Matthieu Gilbert and Timothy Loubineaud! Hats off!

The Netherlands are a few seconds ahead with Manon Kamminga before Germany catches up on her with Laetischia Schimek and Mareike Thum. Vanessa Bittner (AUT) is settled in 3rd position. She gets her place taken by Sandrine Tas (BEL). Manon Kamminga tries to catch up in vain.
Vanessa Bittner passes in front at the beginning of the penultimate lap. She finds herself battling on the line with Sandrine Tas. A photo finish will be needed to decide between the two skaters. It's finally the Austrian who gets her 3rd gold medal of those European Championships, in front of Sandrine Tas and Francesca Lollobrigida.

Fabio Francolini (ITA), Bart Swings (BEL), Alexis Contin and Gwendal Le Pivert (FRA), Stefan Due Schmidt and Simon Albrecht (GER), Paxti Peula (ESP): This 1000 m final has quite a casting. The 2 French control the race, Bart Swings is 3rd and gets a warning. He passes 1st, the French are on his heels. This time, Bart is more careful with his finish hawk against Alexis Contin and gets another title. 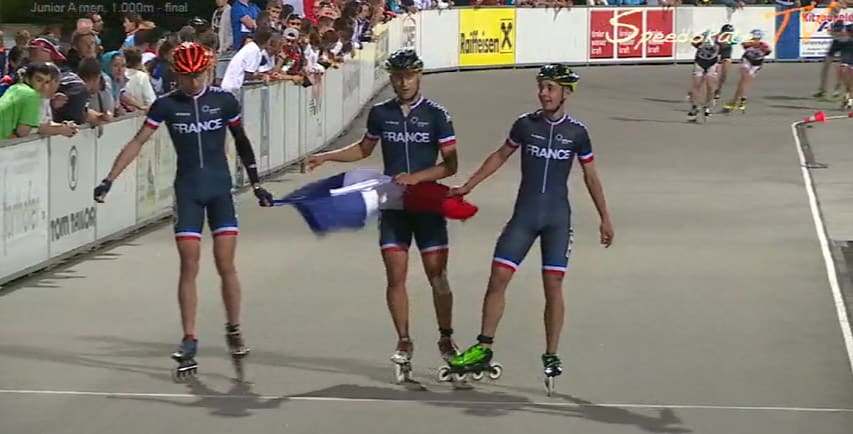 Junior B Women: Spain and Italy call the shots

France is in the lead after 1 lap. The Netherlands seize the front on the next lap. Germany is disqualified. The nations relay in turns at the front, but none takes the advantage over the others. The Netherlands get a warning. France, Italy and Spain alternate at the front. Spain gets more punchy 5 laps from the line. Italy passes on the inside line, 3 laps from the end, and runs away for a good relay. Only Spain manages to stay in contact. Italy, more winged, makes the difference at the sprint. Final ranking: Italy, Spain and the Netherlands.

Junior B Men: Let's do it again

After a race interrupted by the rain, te Junior B men re-raced the next morning. The French manage to contain the Italian attacks and get the victory in front of Spain and the Netherlands.

Belgium got a new gold medal at the instigation of Stien Vanhoutte, N. Keuleers and Elen Van de Catsye. The Belgians impose themselves in front of the French and the Germans. We couldn't see the race, our apologies for the lack of details.

At the image of the Junior B, the French Junior A get the gold medal in controlling their race, especially the assaults of the Italians who have to make do with the silver medal. As for bronze, it goes to Spain. A French double for the relays!

The level of the relay in the senior women's category is close to that of a world championship's with skaters like Francesca Lollobrigida and Erika Zanetti (ITA), Mareike Thum and Laetichia Schimek (GER), Manon Kamminga (NED), Clémence Halbout (FRA), as well as Sheila Posada (ESP), amongst others. Italy wins, followed by Germany and the Netherlands.

Here again, the skaters in the running could have you believe in a world's final. Fabio Francolini and Lorenzo Cassioli (ITA), Alexis Contin, the Souza brothers and Gwendal Le Pivert (FRA), Bart Swings (BEL), Simon Albrecht (GER), the Mulder brothers (NED). A hardcore line-up! Despite the competition, the French perform a hat trick with this ultimate relay race...

The race by Elton de Souza:

A second European title on the relay race! A wonderful race with Alexis Contin and my little bro', Darren De Souza!
In the last two relays, Darren propels Alexis who makes a hole on the rest of the pack. From then on, there's no choice, each of us has to go all out for 2 laps and never look back. The Italians and the Belgians are a few meters behind but they can't reduce the gap that separates us.
Euro Champs on track at the top, let's go for the road now!

Full results of the relays on track

Full results of the 500 m on track

Full results of the elimination races on track