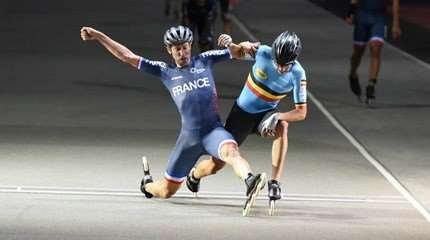 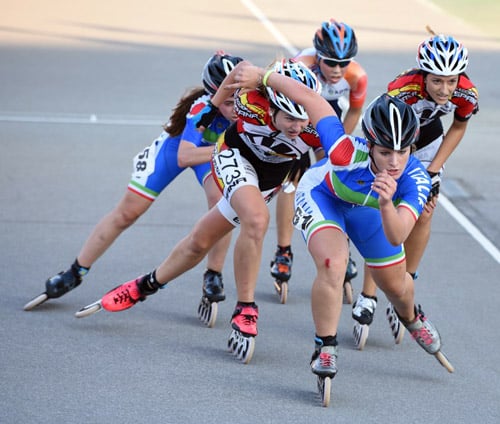 The race witnesses an Italian double by Giorgia Bromide and Alessia Mincela, in front of Ana Humanes Fernandez and Andrea Miranda. The 4 skaters finish in the same tenth!

Two Italians against two french on the start line. After a double false start for Enrico Pavaretto (ITA) and his disqualification, the race finally starts. Valentin Thiébault takes the lead without looking back, the Italian Enrico Rossetto is in second position but he is passed by Martin Ferrié. Valentin Thiébault finally wins in front of Martin Ferrié and Enrico Rossetto.

The two Italians, Giulia Bonechi and Carlotta Camarin, take the lead. They get a good step ahead of the other competitors. Stein Vanhoutte (BEL) catches up. The Spanish Itziar Gutierrez takes the second position just behind Giulia Bonechi, who wins after having led the whole race. Stein Vanhoutte completes the Top-3.

Roberto Fiorito and Marco De Flavis take the lead. Thomas Dambrun (FRA) tries to pass them without success several times, the Squadra Azzura has locked the race. Forte and Marco de Flavis finish 1st and 2nd, Tomas Dambrun 3d, and Borja Navarro (ESP) stays at the foot of the podium.

The Austrian Vanessa Bittner is the first on the line. She finds herself facing Latishia Schimek (GER), Erika Zanetti (ITA) and Giulia Bongiorno (ITA). False start for Erika Zanetti. The second start is the good one. Vanessa Bittner takes a long time to get into the action but then takes the lead and widens the gap progressively with her impressive body built. Behind, there is a relentless fight for the second place. Lastishia Schimek gets the silver on the finish line, in front of her Powerslide team mate, Erika Zanetti. 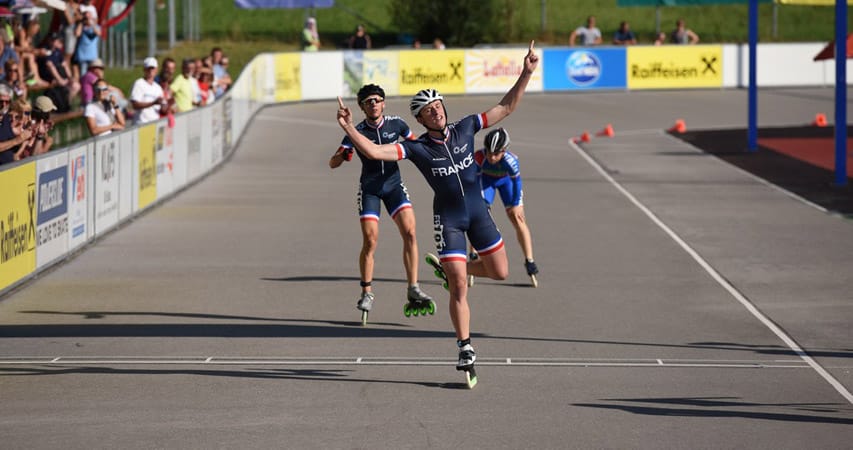 Darren and Elton de Souza (FRA) line up for France, against Andrea Angelletti (ITA) and Michel Mulder (NED). Good start for the two French who take the lead. Elton flies like a cannonball while Darren tries to hold back the attacks. Elton skates away and crosses the finish line in front of Andrea Angeletti, Darren de Souza and Michel Mulder, 4th.

Positions often change, up at the front: Italy, Germany, Belgium and the Netherlands all show up in leading position. Skaters are eliminated two by two. Quickly, there is only a dozen skaters remaining. 3 Spanish are well settled in the pack. The Dutch are more at the front. Mélanie Lizé takes the reins for France. Italy, then Spain, take the lead in turns. Mélanie Lizé is out. 6 laps from the arrival, only 2 Italians, 2 Dutch and 2 Spanish skaters remain.
The last skater to be eliminated is Dominika Gardi. The Spanish Leire Larrasoain takes the front but it is the Italian Veronica Luciani who launches the sprint and wins in front of the Spanish skater. The second Italian, Béatrice Faust, takes the 3rd place.

33 skaters take the start, the packs are dense and skate head to head. Several falls happen repeatedly, but luckily nothing serious. France, then the Netherlands take the lead. Italy skates in a tight pack, close from the front. The 3 French go for an attack, with the Italians in their stream. The Dutch try to catch up on the group of 6. The pack stretches.
At 12 laps, the big nations are still well organized with 3 skaters each: the Netherlands, Italy and France. At 8 laps, the French attack again. The Italians keep their eyes open. France attacks again with Martin Ferrié but Italy catches up. At 4 laps, the 3 French are in the lead and speed up. The 3 Italians make good use of their stream. 500 m remaining. The Italian Leonardo Marina attacks but it is the French Martin Ferrié who steals the victory with a mohawk finish on the line. The 3rd place goes to the Italian Daniele Di Stefano, in front of the French Bastien Lhomme.

There are not many competitors at the start. Several skillful skaters get prematurely eliminated, like Itziar Gutierrez (ESP) and Jenny Peissker (GER). At the arrival, Josie Hofmann (GER) imposes herself in front of Elena Møller Rigas (DEN) and Martina Zanini (ITA). 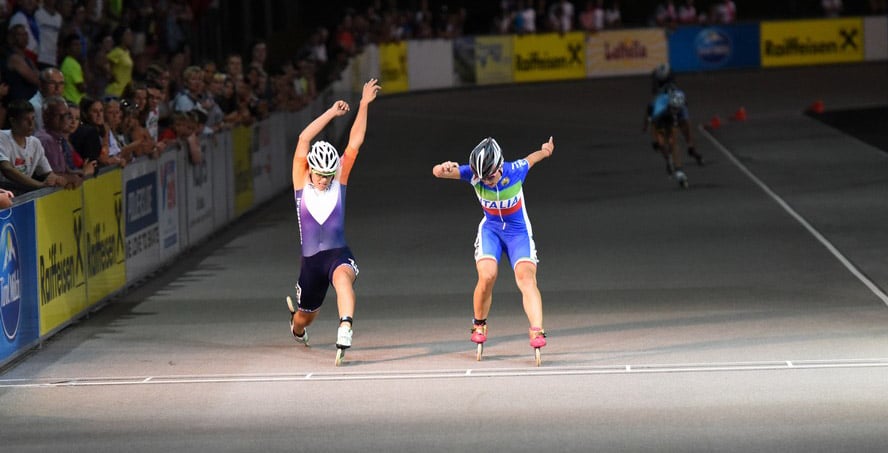 Quentin Giraudeau leads the start of the race for France, followed by Timothy Loubineaud a few places behind. The Netherlands, Italy and Germany, take the lead in turns. The two remaining French take the lead halfway through the race. Italy is on their heels. The Netherlands catch up, followed by Germany. At 12 laps, the 3 Italians gather at the front. At 10 laps, Quentin Giraudeau, the world champion of the discipline, launches an attack. 2 Italians chase him and catch up on him. The 2nd French, Timothy Loubineaud, is in 4th position. The pack divides into small groups.
At 8 laps, the remaining skaters have gathered together. The Spanish David Lopez saves his skin at the expense of the Italian Duccio Marsili, but he is the last skater eliminated at the next lap. The final sprint crowns the Italian Daniel Niero, for a few centimeters in front of the French Timothy Loubineaud and the Dutch Chris Huizinga. 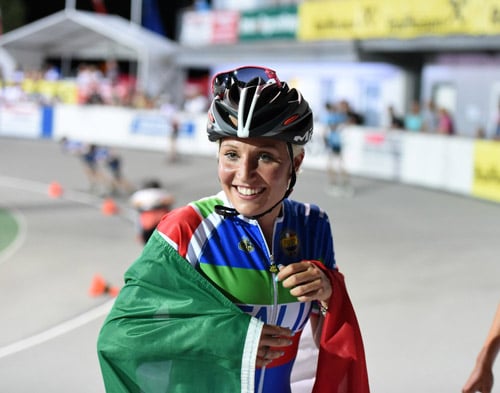 Vanessa Bittner opens the way for Austria, then Manon Kamminga takes over. The Netherlands make the most of it to catch up on the lead. The 3 Italians are just behind. The 2 Portuguese skaters catch up in turns. The Italian Francesca Lollobrigida shakes up this sovereign train that has settled in the first third of the race. Elma De Vries (NED) sets off in the pursuit of the Italian. The pack gathers back and the Netherlands call the shots.

It's Sandrine Tas' (BEL) turn to lead. The eliminations start: Renata Karabova (SVK) is the first out. Italy and Germany attack with Francesca Lollobrigida and Mareike Thum.

For the last elimination, the 2 French are in the lead. The Italians charge at them. Sandrine Tas is shaken up. One might think that she is going to get eliminated, but she manages to catch up and eliminate Juliette Pouydebat (FRA).

Francesca Lollobrigida (ITA) catches up on Manon Kamminga (NED), who launches the sprint. She passes her on the line where the two skaters fight with finish hawks. Sandrine Tas (GEL) gets the bronze.

Last race of the day. The start is given at 22:15. The Italians, the French, the Dutch and the Belgians take the lead in turns. The speed increases in the curve, the skaters elbow and shoulder their ways through. A few well known skaters go down the drain, like Matej Krupka, Tim Sibiet, Maarten Swings and Jan Blokhuijsen.
The French try to keep the lead, then Italy takes over at 10 laps. The Italians take Bart Swings (BEL) in their stream. The Spanish Paxti Peula gets a warning. At 6 laps, the 3 French are leading again. Bart Swings attacks at 3 laps, the victory seems clear... but it's without taking into account Alexis Contin (FRA), who comes and challenges the first place with a huge finish hawk! Elton De Souza (FRA) completes the Top-3. 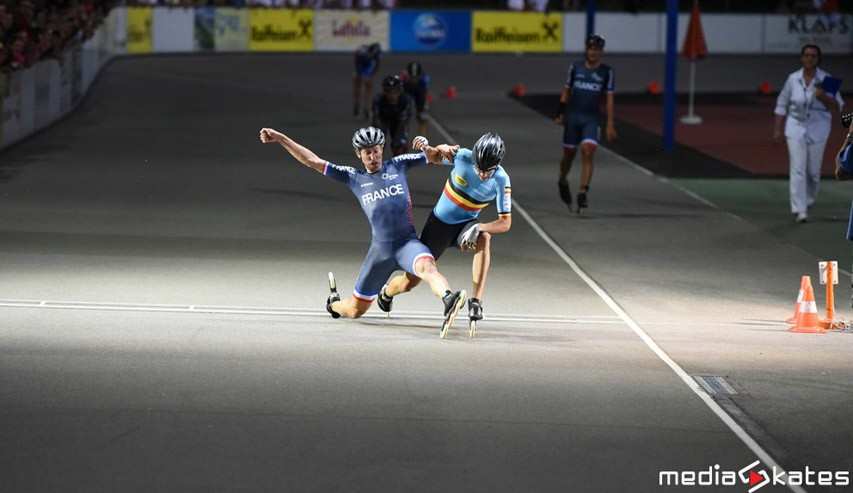 Full results of the 500 m Series on track

Full results of the elimination races on track