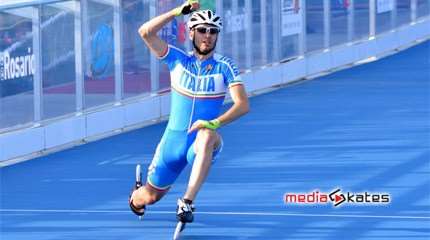 Without intending to make easy puns here, one may say that the winner of the junior women's category is pretty aptly named! Colombian Andrea Canon imposed herself in 26.545 in front of two other South Americans, Venezuelan Yarubis Bandres (26.714) and Colombian Jenesia Escobar (26.802). Let's note once more the dominance of South America and Asia over Europe for sprints. Only 4 Europeans qualified for the finals.

The German phenomenon, Simon Albrecht, stroke again! He took the first place in 24.298 in front of Colombian Edwin Estrada (24.453). The podium was completed by Venezuelian Jhoan Guzman.
Albrecht would have taken the second place if he had raced with the seniors.

The favorite Colombian Pedro Causil won in 24.109, signing the best time of the day - obviously. He finished in front of Korean Lee Myung Kyu (24.327) and of another Colombian, Juan Camilo Perez (24.354). French Darren de Souza ended up at the foot of the podium, just like the Spanish king of sprint, Ioseba Fernandez. 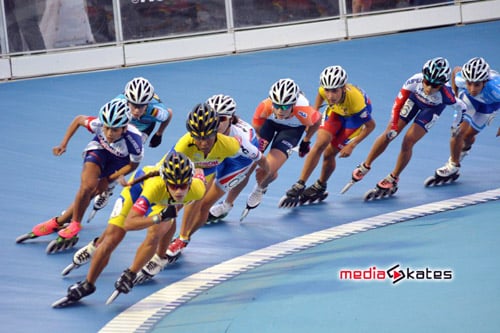 Colombian Fabrina Arias (19 points) and Korean Gan Ran (16 points) dominated the race hands down, helped by their team mates. French Déborah Marchand (8 points) did a very clever race, patient and cunning, but it wasn't enough. She found herself alone after the fall of Mounya Talousi at the beginning of the race. Déborah Marchand fell too, just before the last home stretch, without consequence on the final ranking.

We believed for a long time in the victory of French Alexis Contin. The French did a great race, together with his team mate Ewen Fernandez. But it was without taking into account the formidable New Zealander, Peter Michael, who didn't let him out of his sight at the end of the race. The New Zealander seized the victory on the line with a finish hawk... His 4th title in a row!
Ewen Fernandez (France) completed the podium in front of Korean Son Geun Seong.

The level was very high with Paola Serrano (Colombia) back at a very good world level. The Colombian imposed herself in front of formidable Italian Francesca Lollogrigida. The 3rd place went to Chinese Guo Dan, who did a lonely race. The Halbout sisters (France) did a great placing job in the pack.

The races unfold in good conditions, it is the most important. However, let's deplore the poor quality of the direct broadcasting with many cuts and low quality images. Moreover, many races are not broadcasted, which is very frustrating. 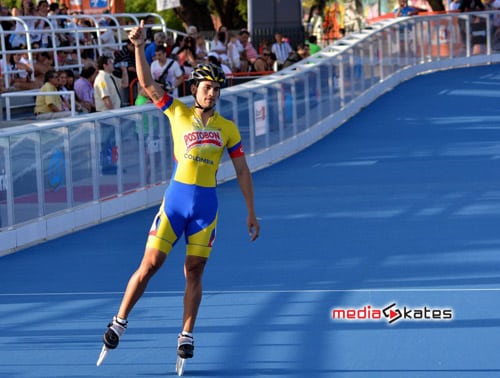 Results of the point and elimination races on track

Results: Colombia show their hands on the 300 m races

Results of the 300 m senior series

Results of the 300 m junior series