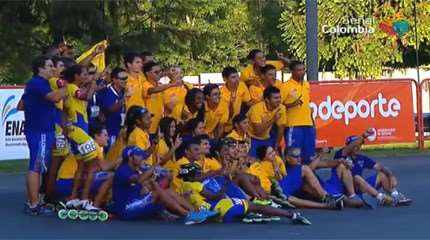 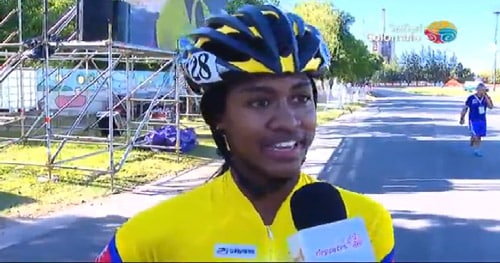 Colombian Yesenia Escobar skates the whole race in the lead, in front of German Jenny Peissker in her stream, and Belgian Sandrine Tas in 3rd position.
The Colombian knows how to control her opponents and manages her lines to the best until the finish line.
Sandrine Tas couldn't do anything, probably tired from her series of races and her 3 world titles!

The Junior Men's race is a game of balance between the two Colombian skaters (Garzon and Estrada) and German Simon Albrecht, favorite but outnumbered! Albrecht seizes the lead. A colombian cuts his line in a bend and passes ahead. Albrecht pushes him and loes balance a little. The second Colombian skater catches up on him. In the end, Colombia wins with Edwin Estrada, Fabian Garzon finishes 3rd and Simon Albrecht is disqualified.

The race start is quite calm, the skaters observe one another and pace themselves. Italy, France, Spain, Belgium, Venezuela and Korea are in the running. Only the relays shake the pack. A clearer acceleration is launched 4 laps before the end with Korea in front. Belgium takes the lead at 3 laps, Germany and France take the sides to catch up.
One lap from the arrival, Venezuela, Korea and Belgium fight for the lead. Korea and Chinese Taipei speed up, with Venezuela in their stream. Taipei wins with a comfortable lead. 10 m behind, the fight is settled with front hawks: Belgium wins over France. 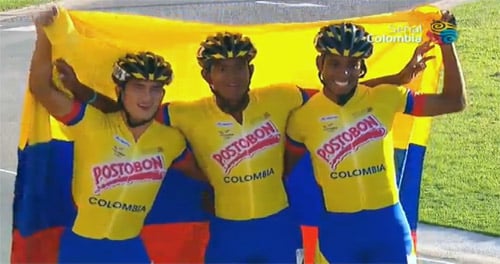 The Junior Men's race seems to offer us the same scenario as the women's. The pace is moderate during the first kilometers. In the running, you can find Italy, South Korea, Colombia, France and Venezuela. The pack wakes up 8 laps from the arrival, after the fall of the Ecuadorean skater during his relay. The pace being slow, he can catch up and stick at the rear of the pack.

5 laps from the line, Colombia takes the lead, then Korea one lap later. France takes the outside to catch up, Colombia too, forcing his way through and almost finishing in the grass of the roadside.

3 laps from the end, Colombia takes the lead. The last couple of laps are restless. The Korean, in total overspeed, goes off the road. Italy is in front, but there is a lot of ramming going on in the last bend. Colombia exits from the ultimate bend first, with Italy in his wheel, then Venezuela and France 4th.

The race starts faster than the previous ones. The pack remains dense and relays follow one another. Each nation seems to be able to fight in the final sprint: South Korea, Germany, Italy, Colombia, the Netherlands... The overall level seems homogeneous. 3 laps from the end, Colombian Yersi Puello speeds up a gear to replace herself. Italy relays in her stream, Germany follows. The sprint is launched in the two last laps. Paola Serrano (Colombia) is in front but Italy passes her, lining up Francesca Lollobrigida for the last relay in the best conditions. Johana Viveros passes her in her turn, and exits first from the last bend. Colombia wins another title after a closely fought sprint!

The Colombian TV channel has already an eye on the French, even before the start! There's no doubt that the results of those last day carry weight. Chile, the Netherlands, South Korea, France, Portugal and Argentina are lined up at the start. The teams observe one another during the first laps.
10 laps before the end, Alexis Contin hardens the race. All the skaters keep a close eye on their opponents. Elton de Souza shoots off, with Argentina hot on his heels. Alexis Contin relays. The two nations break away. Chile tries to catch up with Portugal. Ewen Fernandez seems to keep his energy for the end. Elton de Souza sets things in motion again, still with Argentina in his stream, and Portugal, who does his best to catch up. It's Argentina's turn to lead, with Alexis Contin in his stream, followed by the Netherlands.
Two laps from the end, the Netherlands take the lead in front of France and Argentina. The group of 3 breaks away. Ewen Fernandez is stuck.