2012 French Cup of the Skating Marathons : a rainy stage in Lille 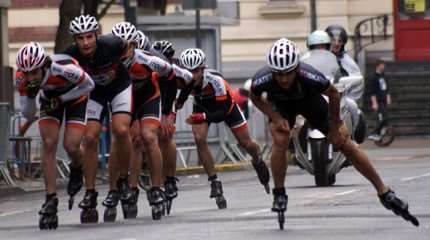 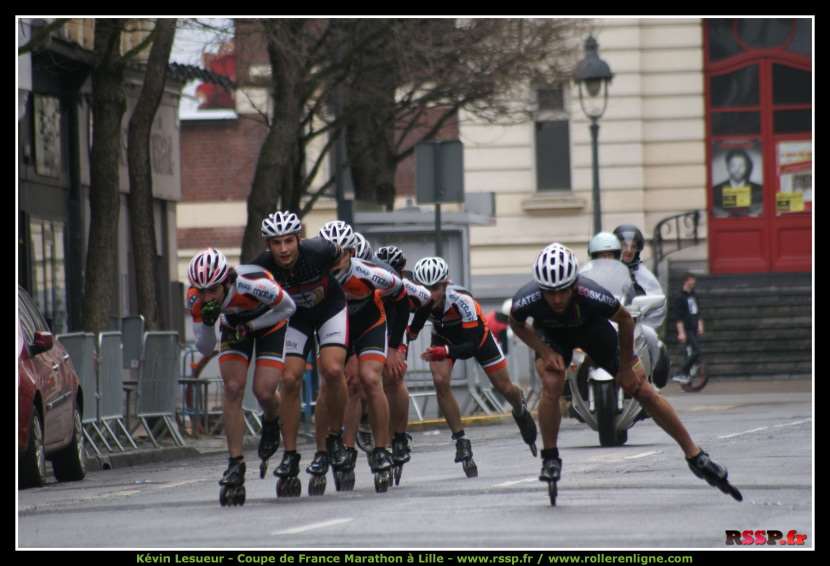 A stage close from having been cancelled

Organizing a race is never easy, particularly when you have to requisition the streets of a city center. Then, when it’s about a major city like Lille, the task is arduous and requires a few compromises.

At first, the CDFMR of Lille was almost cancelled a couple of weeks before the event because the municipality decided that too many events were happening in the city center. Some of you may remember the violent stopping of the World Inline Cup of Nice nearly ten years ago for similar reasons, because the Promenade des Anglais was over solicited.

The organization of Lille had to fight to save its competition which was finally concentrated on Sunday afternoon! It’s useless to say that the schedule was tight.

The weather conditions didn’t make it easier. The rain started to fall on the previous day, calmed down and turned into drizzle before falling harder than ever during Sunday morning. As a consequence, the ground remained wet the whole day. And it even snowed on Monday morning! In fact, the skaters avoided the worst! 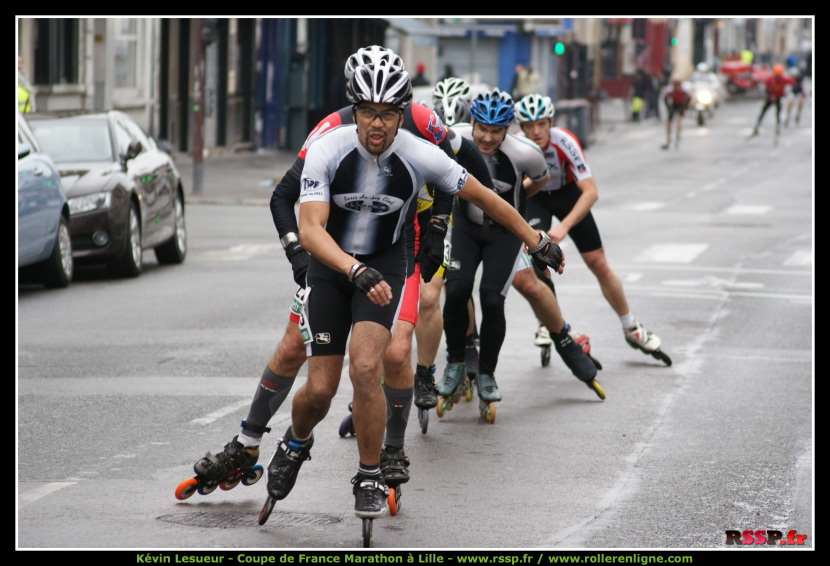 The Mens Marathon: Guyader as the big boss

The marathon started at 2:00 PM in order to enable the skaters living far from the North capital to take their trains without complications. The podiums followed immediately at 4:30 PM. For once, the marathon took place before the leisure race.

Half of the circuit was renovated and the skaters could focus more on their race than the previous years. Still a good half remains rough, which put calves to a severe test and made numerous participants fulminate.

The elite and national skaters started the hostilities under a heavy and pendulous sky during a break of rain. On the starting line, there were serious skaters who had made the trip: Yann Guyader (EO Skates) back from Columbia two days before, Julien Levrard, a freelance writer for EO Skates and young father, the Lépine brothers (RPM Poli), the Da Souza brothers, Nolan Beddiaf, and the young and gifted Guillaume de Mallevoué (Ligne Droite / Powerslide)…

You don’t have to wait very long to see Yann Guyader break away. The Columbean by adoption clearly announced it before the start: “Cartridge from the very start”… and he kept his word. He will need two laps to really make the difference, as the group of pursuers isn’t willing to accept the situation passively. The hunt is organized… except for Brian Lépine, no skater seems to be able to go back on his heels. The RPM Poli skater is going to manage to go back to contact and take a few relays, but Yann Guyader steps on the accelerator again and definitely draws away: he’s 30 seconds, and then more than 1 minute ahead!

Behind him, the group of pursuers gathers 6 skaters. Several of them are going to fall during the 19 laps next to the Place de la République. The white stripes of the pedestrian zebra crossings are pitiless in the bends… The fastenings and screws suffer too: indeed, at least 4 skaters lose their frames during the race.

Yann Guyader finally wins with a comfortable lead. As for the pursuing group, only the final sprint reveals the right order in the Top-5: Brian Lépine establishes himself on the finish line in front of Julien Levrard. 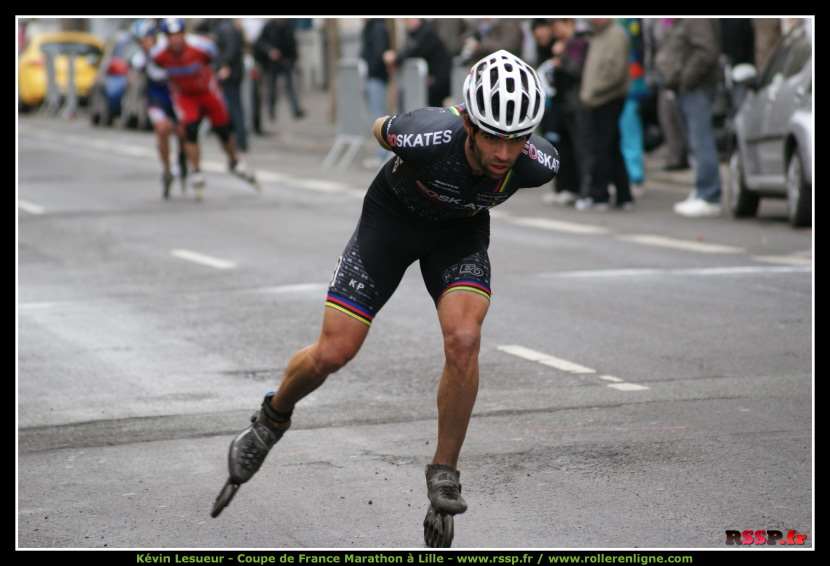 Womens Marathon: The race gets lively during the sprint, at last!

In the womens category, the race unfolded quite unusually – unfortunately: a train of senators before a more dynamic final sprint. Yet, we could have hoped more excitement with the presence of Belgian Hilde Goovaerts (Cadomotus), the winner of Berlin’s Marathon one or two years ago who is just back from her ice skating season. The Gaudesaboos sisters made the trip too, just like Mélissa Chouleysko, Laetitia Lebihan (RPM) who ended her international career, Justine and Clémence Halbout, and also the young ladies of the French Pole, Lyse-Anne Planchenault and Deborah Marchand.

Despite a few supported relays, the race only becomes lively a few hundred meters before the last bend. Clémence Halbout wins the sprint in front of Hilde Goovaerts and Justine Halbout.

The girls finished the race with 4 laps of difference compared to the first men. The latters finished on a dry ground but the ladies had to cope with a heavy rain during the last meters. 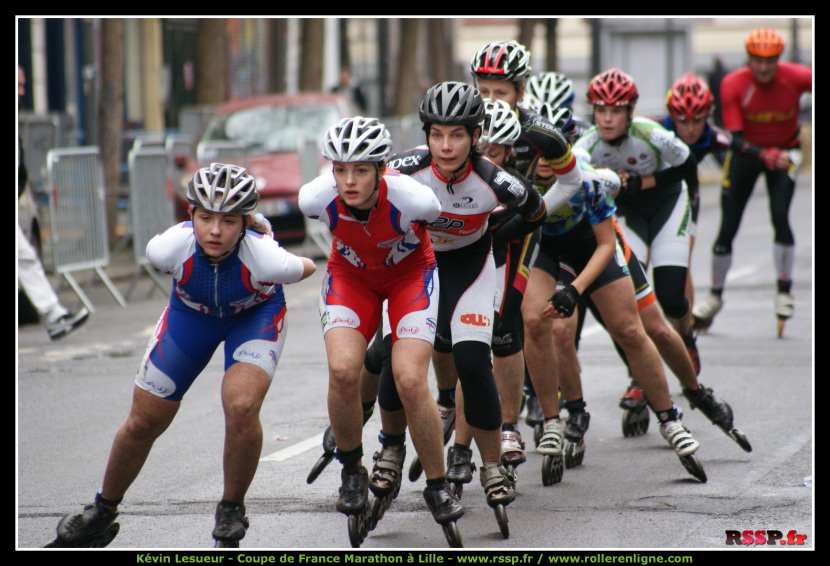 The podiums and the formal ceremony of the marathon took place under umbrellas while the leisure race was starting. As soon as the first meters, Anthony Della Chiesa (CARS), who belongs to the Minime category, takes the lead. He is confident about his weight-bearings and doesn’t hesitate to push. He heads up at the end of the first lap. Behind him, some Belgian skaters are there in ambush. 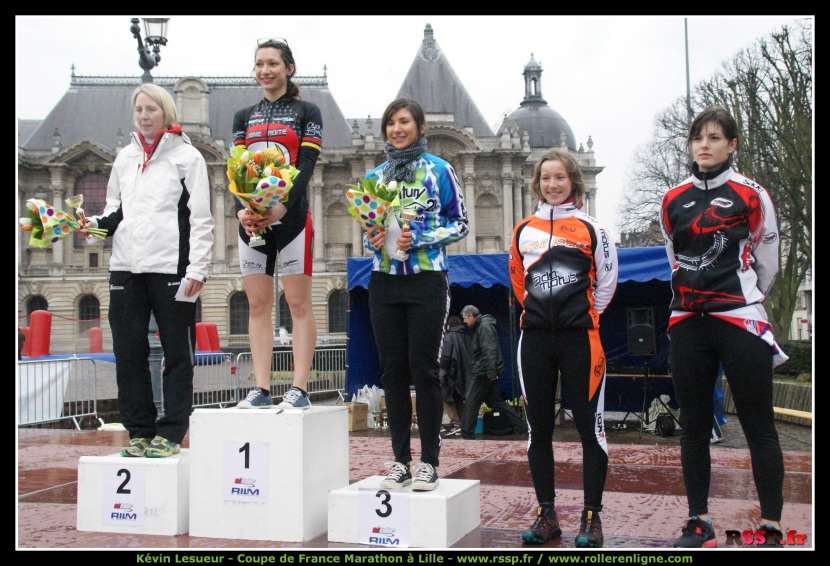 The stage in Lille didn’t benefit from the best weather conditions and let’s hope that the other stages will take place under better auspices. Let’s note some improvements compared to last year in the organization of the competition by the students. Amongst the positive points, the motorcyclists were very professional, making the skaters’ safety a priority. They showed great mastering on a slippery ground. The organization had also better prepared the numbers and chips, the distribution seems to have unfolded without problems and the students were very welcoming.

However, a few points would still need a little improvement. Organizing a race in a city center is a good thing for the image of skating but it is better if the ground lends itself to it… The skaters had a hard time with the half smooth/half rough ground. Moreover the Place de la République with its cobblestones is inappropriate for organized activities and skating initiations. Why not abandoning the prestige of the city center to find a more outlying but more favorable place for skating…? All the more so as the city council is hard to be convinced for reserving the area.

On the course, let’s note a lack of signalers and Vauban barriers: pedestrians were crossing in numerous places without being really aware of the skaters’ speed. Same comment for the finish line: the sides of the arch were not secured enough. Hopefully somehow, the bad weather reduced the risks with only a few spectators watching.

The sound system left much to be desired too: you can’t cover a big area with only two 150W speakers, especially when the starting line is 100 meters further. The MC had two solutions: either he was on the place to liven up the village at the expense of the race, or he was on the line to comment the race and he was no longer audible in the village… improving but could do better. 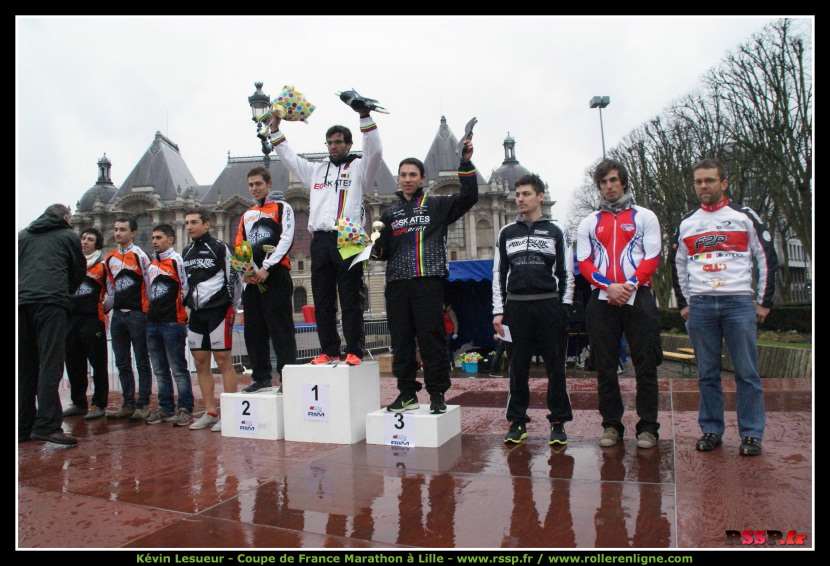