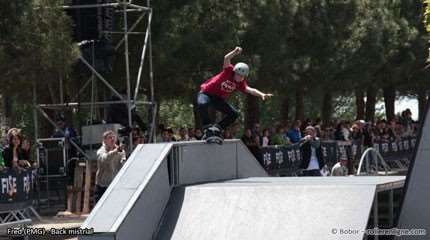 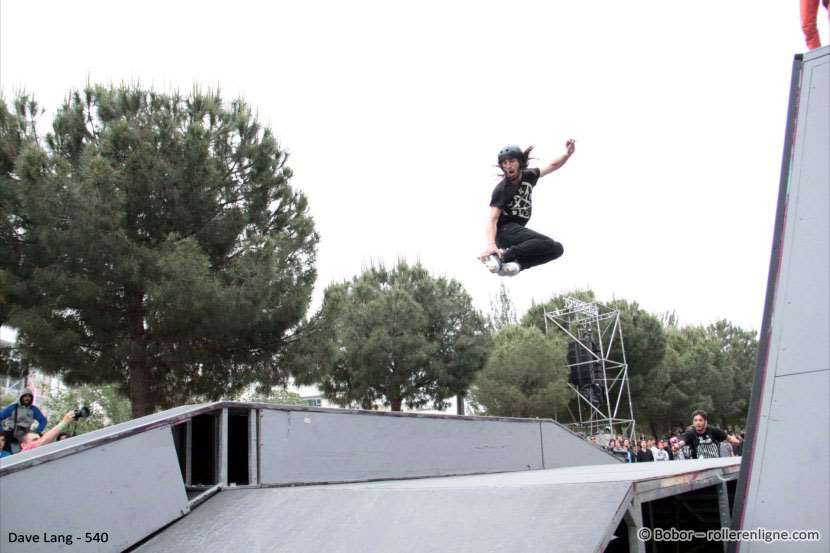 This slopestyle area seems to be a world first. It is set on a slight downhill, 100% aggressive skating. The skaters start from a huge launch ramp which is around 4-meter high, in order to pass a big table. Then, the competitors go on with a second table topped with a rail and a quarter-pipe before going on.

Then, there is a rainbow and a flat rail. The skaters must take some speed in order to take the downward flat curb with a wall. Then there are two curbs up high on a quarter pipe equipped with a coping, followed with a corner with a wall. The rest of the course leads to a second rainbow and directly onto the spine. The area ends up with a quarter-pipe topped on both sides with kinked rails. Unfortunately, the organization not having the authorizations to make holes on the road, some modules are quite unstable.

“The skating area comes from a reflection of the whole team after the 2011 FISE. We said to ourselves that the bmx/skate park wasn’t conceivable anymore, especially with the weather problems of 2011. The number one goal of the FISE is that the skaters have a good time. Sharing the area with the 250 BMX was becoming lame for everybody!

I suggested the slopestyle with the support of my management. I had had this idea in mind for a good bunch of years and I took the opportunity!”

It is not possible to go back and forth. In case of a fall, you resume your course from where you are. Three falls and you are out. The aim is to pass as many technical tricks as possible on the modules available.

As soon as 12PM, both amateurs and pros had a go at the slopestyle course. The general opinion approves of the originality of the park. The 65 registered skaters are not short of work: they have two runs and cannot exceed two falls in order to qualify.

The first groups unfold and lots of neglected skaters make the difference, like Paul Bandicourt and Pierre Doriez. The 4th group wakes up the lethargic public.

Thomas Riffaud, Rémi Santos and Jordan Matlaya set the park on fire. Riffaud passes a nice top soul, Santos shakes up the arena with two runs close to perfection and Matlaya entertains the public with numerous rotations. Last but not least, the 5th group puts an end to these uneven qualifiers. Some nice lines definitely made a deep impression.

However, even if the organizers are willing to give a chance to everyone, let’s deplore the obvious difference of levels between the skaters, sometimes too young or lacking experience. 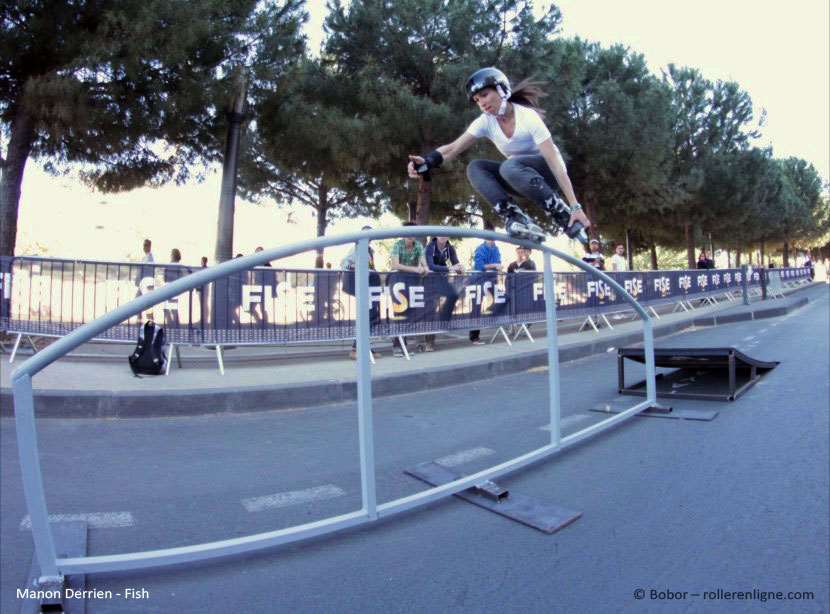 As soon as 11 AM the skaters under 16 warm up for the final. The tricky thing is to manage to pace themselves for their final. Unfortunately, they are hungry for success and throw themselves headlong into the contest… hence the number of falls and visits of the medics!

The qualifiers let a good impression to the public. The young skaters gave all they had to qualify for this final phase but we are far from imagining what is going to come.

Divided into two groups, the 10 qualified skaters will have to elbow their ways to the victory. No matter how big the falls, the -16 amateurs get back up without hesitation. As for the tricks, they have no reasons to be jealous of the senior amateurs: rotations from all sides and varied grinds. A real war was declared between the first qualified skaters.

The first run goes to François Tocquer, who takes the advantage with a series of rotations from 540 to 900.  Nevertheless, Yuma Baudoin wins the second run thanks to a sweastance on the flat rail, a full tork on the rainbow and a top soul on the curb, and with nice rotations on top of all that. The PMG skater, Frédéric Bukowski brings up the rear with a nice 360 and a back mistrial. The fight between the top three was a delight.

24 skaters qualified and will do anything to get the victory. Stéphane Torrés, second to last of the qualifiers, gives all he has and makes the difference with two runs without a hitch. He achieves the best ranking recovery and reaches the 8th place.

Despite their different styles, English Julian Coulter and Jack Winderllis, both 17, arouse our curiosity. Coulter shows a very clean run with varied grinds, highlighted with a true king grind and a fishbrain, while Winderllis has a very clean and aerial style which enables him to get the 6th place.

The public is hungry for more and impatiently waits for the next skaters. We are now at the foot of the podium. Alexis Vallés does a run full of backslides and true makios. Ending up 1st of the qualifications, Rémi Santos unfortunately got drowned in the slopestyle course but still secures the 4th place thanks to nice flat rotations.

The serious things start: here is the podium of the 2012 edition. Paul Bandicourt, a neglected skater until then, is the discovery of the year. He passes a 900 with surprising ease, and his disaster true top soul sealed his outsider position.

Local skater David Aubert is the favorite of the public and loses no time in confirming it with an amazing makio rocket. With great speed on the course, he passes a wonderful fakie misty re-named “galipette cendrée” (greylag somersault), a hijacking by the MC Tim Marsh of the name of an imaginary bird invented by French humorists.

However, it is not enough to dethrone Jordan Matlaya who mixes speed and risk taking. Managing a double backflip is not easy, but going on with your run with as many difficulties, a 900 and then taking speed in order to do a wallride on the corner, must be exciting. Hats off! 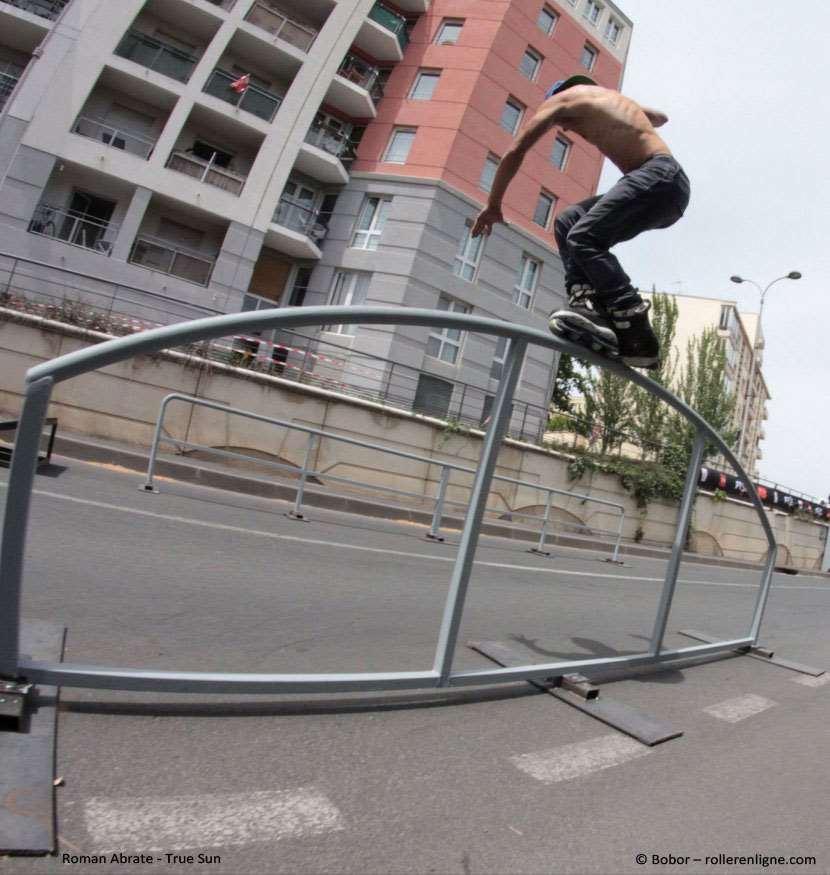 We had been waiting for the pros since the beginning of the FISE. Some have been skating the slopestyle since the beginning of the competition and we have witnessed only amazing stuff since then. 37 pro-skaters: European skaters mainly, coming from England, Germany, Spain and Belgium. The first manifestations of the public go to Romain Abrate (Team France), very aerial and clean. He sets the bar high with rotations, disasters and backslides. As for Warren Digne (Rollerblade), he did not have to be asked twice to go higher thanks to a fishbrain rocket at the top of the quarter-pipe. Canadian Richie Eisler will have given what he could despite an oedema at the knee. Mister Alfano (Team France), who has kept a low profile until now, starts with a 1080 and doesn’t neglect a single module on the course.

Same thing for the double winner of the FISE, Roman Godenaire (Team France), who skates the park just like a video game character. David Lang, an American skater of the Shima Skate Manufacturing Team, gets his ticket to the final thanks to a constant speed throughout his run, punctuated with fakie 540s. The public expects a lot from Swiss Maxime Genoud who made a strong impression with a speed high 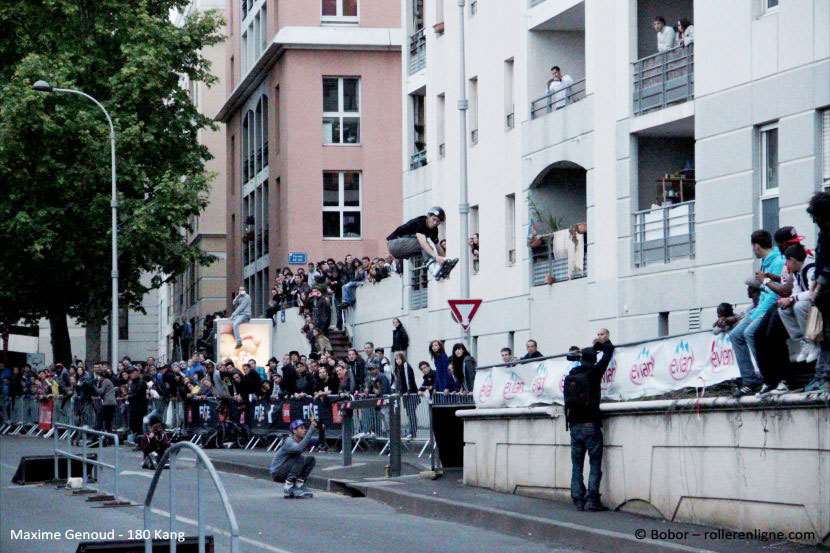 er than the average and an original way of using the park. Dominic Wagner and Stephen Swain also qualified. The final promises to be huge!

The day is not over yet: the rail contest will finally take place despite the absence of the sponsor, and thanks to the generosity of the skaters who finance the reward! The surprise comes from 14-y old Laurent Alessandri who managed a royal on the rail in front of a wild public.

As usual, this contest livens things up despite the rain threat. Guillaume LeGentil put everyone on the same wavelength with an impressive (360) hurricane top soul. 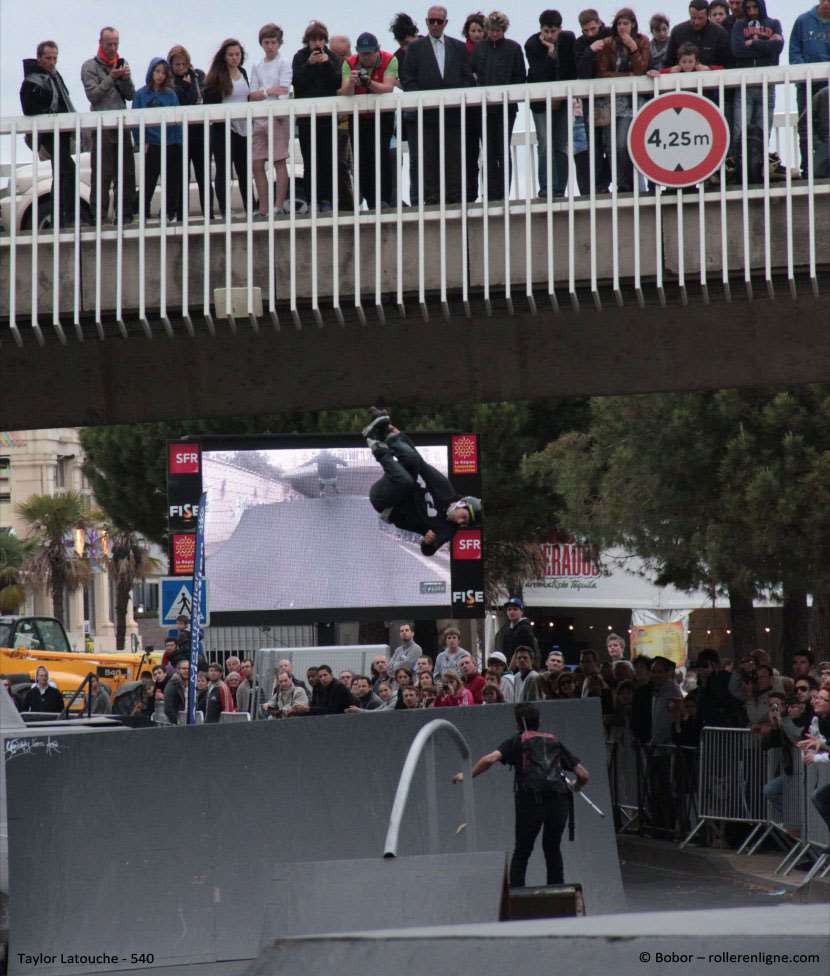 The rain and storm postponed the rest of the competition. Initially planned at 11 AM, the contest resumed at 5 PM.

The women are 9 to take part and are intent on promoting female skating. The Top-Three didn’t do each other favors. The 3rd place goes to Spanish Maria Munoz Diez who manages wonderful alley oop souls and a back UFO on the rainbow.

English Jenna Downing, just back from injury, still passed a 540, a back royal on the downward flat curb and a successful wallride on the corner.

Mathilde Monneron is a cut above the rest during the final thanks to her speed and nice rotations throughout the course. A final full of lightness which gives a foretaste of the long-awaited pros final.

This is the last stage of this edition of the FISE, 15 pros cautiously warmed up with the fear of a new shower coming. Consequently, the group system was not applied.

Luckily, the competition could unfold without a hitch until the end. The final held its promises: we were waiting for even more ambition from the skaters, and it was the case.

German Dominic Wagner made the difference with a fast and dynamic run made of a very high wallride starting from the spine on the wall of the Avenue du Pirée. The European scene is not outdone and Stephen Swain very well understood that taking risks was rewarding: he devised a very aerial run with a nice back full tork finishing with a 360 on the rainbow.

We were expecting a lot from Roman Abrate and Stéphane Alfano. But despite a creative skating, their falls got the better of their qualification ranking.

Stéphane gets the 7th place while Roman is 5th. Maxime Genoud and Taylor Latouche elbow their ways to the podium. The latter causes a stir during the final thanks to an almost-complete use of the modules on the course with double backflips on the first table and tricks in abundance on all the modules. A very invigorating show forecasting an interesting challenge, which Maxime Genoud takes up without batting an eyelid. Always very fast, he shines with his very clean rotations punctuated by several grinds, like a back full tork on the rainbow. The renewal arisen by Taylor Latouche leads him to the 3rd place. David Lang knows what he has to do and does endless fakie and flat rotations in order to get the victory. It is only a whisker away and Dave is on the lookout for a misdemeanor of Romain Godenaire, but it will not happen.

Indeed, he succeeded so well for his first run that there is no suspense: it was a series of rotations, corks or backflips. He twirled around and made the public’s heads spin. A deserved victory which makes him enter the legends of the FISE with 3 wins in a row.

In addition, this edition was unlucky with the weather but it was less bad than what was forecast. We have been given a generous helping of show and twists and turns by a motivated future generation of French skaters. Amateurs and Pros thrilled us. Let’s thank the skaters for making the trip each year, because without them we would not take as much pleasure. See you next year!

Video of the slopestyle competition
Website of the event
Interview with Johann Berthonneau on blading.info
Photo gallery of Sessions.fr
Team France Inline Street at FISE 2012