2011 World Championships: Feedback on the first day of competition 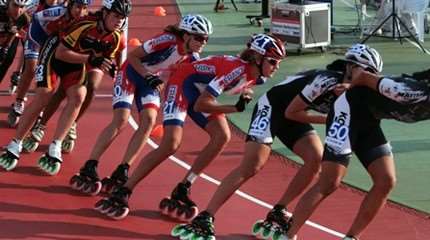 300m against the clock 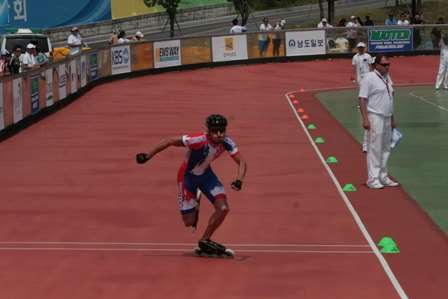 Observing the results, it is clear that two nations are competing for the podiums: Columbia and South Korea (host country) won all the categories… According to the skaters, the track is fast but very peculiar with long straight lines and sharp bends. On the whole, the European countries lag behind Asia and South America.

The organization is not running smoothly yet, the schedule is not respected and the starts of the races were up to 1:30 late. The temperature is hot and the sun is burning. Beware of sunstrokes!

The judges had to check the times to the hundredths to decide between the first two! South Korean Bongju Choi wins with 24.955 in front of Columbian Andrés Agudelo (24.958), while French Darren De Souza (25.038) is only one tenth behind! Saying that the first three have a close finish is an understatement! And the first ten are under 26 seconds…

In the Womens Junior Category, Korean So Yeong Shin (26.342) didn’t give a chance to her two Columbian opponents. She ends up 6 tenths ahead of Yesenia Escobar (26.941), and far ahead of the third, Estefania Hurtado (27.176). Let’s note that, having a glance at the times of the finals, in the Womens categories the juniors were faster than the seniors for the 300m track race… things are in safe hands for the future!

Talented Columbian Pedro Causil (24.314) established himself in the Mens Senior category in front of compatriot Andres Muñoz (24.427). French Nicolas Pelloquin (24.503) ends up third. Korean Kyung Tae Kang had to content himself with the fourth place. 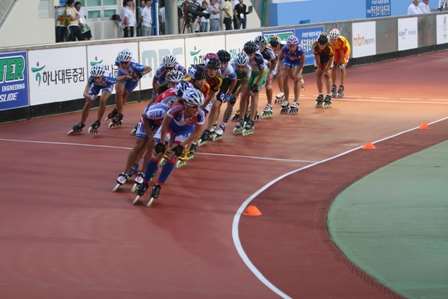 Mens Juniors 15km Eliminations: Korea establishes itself on the track

The USA, South Korea, Taiwan, Columbia and the Netherlands take over the head from each other during the Junior eliminations. The end of the race is animated by Taiwanese and Korean attacks. The sprint is instigated by the best Koreans, 4 lapses before the finish. The public is won over in advance. You have to be strong if you want to supplant the Koreans on their track: they are on their own ground. They establish themselves in the 15km eliminations in the Mens Junior Category: Min Yong Park (KOR) ends up first in front of compatriot Sang Cheol Lee (KOR) and Taipei skater Chen Yangcheng (TPE). Columbian Boris Peña is at the foot of the podium: He got the third place stolen on the finish line…

In the Womens Junior category, the race was animated by the South Americans, Koreans and Taiwaneses. There were also a lot of falls, so that the tryout had to stop for a good dozen of laps. Columbian Yenny Serrano (COL) manages to stand up to the Asian skaters, though. She wins with a sprint in front of Li Mengchu (TPE) and So Yun Cho (KOR). 5 out of the 6 first skaters are from Korea or Chinese Taipei. The first Europeans are French and Italians. Marie Poidevin (FRA) has to content herself with the 7th place. Arianna Piazza (ITA) ends up 8th and Déborah Marchand (FRA) takes the 10th place.

Scott Arlidge (New-Zealand) goes and gets the first two points of the elimination. Then Yann Guyader and Fabio Francolini escape. They collect their points. Belgian Ferre Spruyt takes charge and brings back Bart Swings into the race, leading him back to contact. It’s now Bart’s turn to get out and score the maximum points. Then, Scott Arlidge escapes with Geun Seong. Yann Guyader hotfoots alone after them; they are half a lap ahead.

Bart Swings goes on an impressive spring to go and get the 3 points of victory.

The Europeans manage to get on the podium at last, thanks to Belgian Bart Swings. He wins with 11 points ahead of New Zealander Scott Arlidge (10 points). Korean Son Geung Seong and French Yann Guyader also get 10 points.

The Asians and South Americans ruled the race.
In the Womens category, Korea, Columbia and Chinese Taipei share the points. Korean Hyo Sook Woo established herself clearly with 15 points in front of Columbian Kelly Martinez (11 points) who gave up in the last laps. Chinese Taipei ends up 3rd thanks to Fan Chihiling. The first European gets the 6th place, it is Arianna Arcidiacono.

At the medal ranking, South Korea logically takes the lead with 8 medals, incl. 3 gold. Columbia reaps 3 gold medals, and Belgium is at the 3rd place thanks to Bart Swings.
Tomorrow, the day will be busy with 500m Sprint, 1000m Line, and the point and elimination races… the organization doesn’t seem to match up to that of Anyang in 2006. For the moment, the journalists don’t even have a press room and there is no internet access on the circuit. Let’s hope that the situation will improve in the following days! 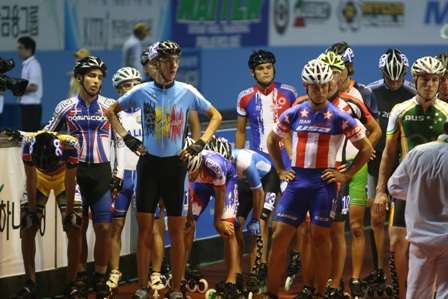