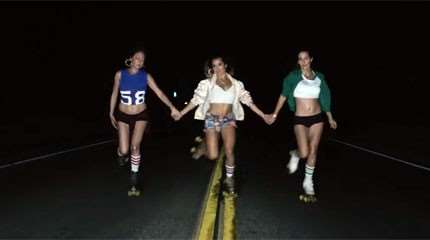 Music videos which are entirely dedicated to skating are rare. Chet Faker offers a 4-min choreography at night, close to a sequence-shot. From the album Built On Glass, the music video has more than 30 million views today. Released in April 11th, 2014.

Lots of sensuality and skating in the last music video of French band Brigitte.

Noel Gallagher brings us on a roller derby banked track just like in Whip It, the movie.

Let's travel to Australia with Eagle and the Worm's single 'Give Me Time', featuring the 2004 World Champion in Ice Skating Jayson Sutcliffe. Shot in the Caribbean Rollerama ice skating rink in Melbourne, Victoria in September 2012.

The Pet Shop Boys met the London Rollergirls to shoot the music video of 'Winner'. From their album Elysium.

6. Thomas Monica and the Tangent Universe - The Girls Are Always Right

More roller derby! And it was shot in France, in Besançon with the Voodoo Vixens.

Madjive relied on the French roller derby leagues of the Doubs and around (Belfort and Alliance Glisse Franche-Compté) for the music video of 'Heal It'.

Probably one of the most famous skating videos in the world! Evian stroke hard in releasing this roller dance video with skating babies. The concept is simple: make a motion capture of adult dancers and remodel it on babies. As a result you get an off-the-wall video that has been viewed over 80 million times today.

This scene of the 1955 movie Always Fair Weather remains a reference in the legend of skating in the movies. Let's enjoy it one more time...

There is no need to say that the list is far from being exhaustive. We couldn't possibly condense them all in here. Thanks for your understanding!

A little bit of skating in Shakira's music video

Skating sequences in George Benson's Give Me The Night